A Soul For Chaos: The Soulbearer Trilogy, Book 2 by Crista McHugh 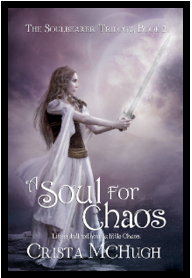 Today I’m welcoming Crista McHugh and her book A Soul For Chaos.

A Soul For Chaos

Book 2 of the Soulbearer Trilogy

Life is dull without a little Chaos.

Trouble is more than just a nickname for Arden Soulbearer. It seems to follow her wherever she goes. And no one knows this better than her protector, Devarius Tel’Brien.

Dev thought that by moving Arden to Gravaria so she could learn how to control Loku, the chaos god whose soul inhabits her body, life would be simpler. Wrong. Not only is he continually torn between his duty and his growing feelings for the Soulbearer, but he also has to contend with the rival prince who wishes to claim her heart. Adding to his problems, a group of powerful mages have banded together to rid the world of the disembodied chaos god once and for all. Of course, that means they have to destroy Arden in the process.

From the dark recesses, he watched them enter, the torch light flickering across their golden masks as they filed into the main chamber. Tonight, the Tribunal of the Gods would meet for the first time in over a decade. Tonight, they would discuss the fate of the newest threat to their power.

He adjusted the mask of Nelos, concealing his face from everyone. It didn’t matter who he was, only the god he served. And he did more than just serve Nelos—he was his voice in this realm. Out of all the priests and priestesses in the chamber, only he spoke with the true authority of a deity. Only he could channel the God of Law’s power. And only he could lead them on the crusade to rid the world of the god of chaos, Loku, once and for all.

He waited until everyone else had arrived before he made his grand entrance. With a flick of his hand, the torches brightened, bathing the main chamber in light. The jewels that adorned the wall winked at him as if they already approved of his plan.

“So nice of you to join us,” the priestess wearing the mask of Ivis said as he entered. “We could have done without the theatrics, though.”

“The light of the Law will drive the darkness of Chaos away,” he replied, quoting the teachings of Nelos. As he sat in his appointed chair and draped his silver robe across the seat, he surveyed the other eleven members of Tribunal, trying to pinpoint each of their weaknesses. “After all, that’s why we’re here—to discuss what to do with Loku.”

“In a way, yes.” The Priestess of Ivis narrowed her eyes as if to challenge him.

He muffled his snort. Ivis may have the most followers in Gravaria, but she was a weak goddess. Too kind, too merciful, too aligned with the so-called “Lady Moon” worshipped in Ranello.

The Priestess of Ivis finally turned her gaze away from him. “Loku has a new Soulbearer.”

“Why should it concern us?” the Priest of Jussip asked as he toyed with the golden battle ax dangling from his belt. Like the god he served, he was a soldier, a man of action. He was probably wishing the Tribunal to end as quickly as possible, but he would also be the easiest to sway to Nelos’ plans.

“Agreed.” The Priestess of Sulia twirled her hair around her fingers. “Loku has had many Soulbearers, and they all suffer the same fate. Why is this one any different?”

He leaned forward. Did they really not know? Had they all turned a deaf ear to the rumors coming from Ranello? “For starters, she’s a woman.”

One of the other priestesses gasped, and every pair of eyes behind the golden masks focused on him. Nelos had told him everything about her, every detail about the girl known as Trouble. For once, he had the upper hand, and he would use it to bend the others to his will.

The Priestess of Sulia stopped playing with her hair. “But Loku’s never had a female Soulbearer.”

“She’ll probably succumb to the madness sooner than a man.” The Priest of Jussip fidgeted in his chair. “Is that why you called this meeting, Ivis? To mark this milestone in Loku’s regression?”

“No.” Ivis’s voice echoed off the wall, and a current of magic rippled through the air.

A shiver raced up his spine, and his muscles locked. Could she have the ability to channel her deity as well?

“Do not fear her, my servant,” the familiar voice of Nelos whispered in his mind. “She is the one resorting to theatrics. Ivis doesn’t hold her in the same regard that I do you. You are my chosen one. You are the one who will bring peace and order to this realm.”

He relaxed back against his chair. “She’s a Ranellian.”

Once again, he held their attention, and the Priestess of Ivis appeared slightly perturbed by it. “Correct. And since you know so much about her, Nelos, do you care to offer a guess why I’m so concerned?”

A smile curled up behind his mask. “Unlike the others, she’s used Loku’s powers for something other than personal gain.”

“So I’ve heard.” Ivis addressed the other members of the Tribunal. “Arden Lesstymine is the girl’s name. From the reports I’ve been given, she channeled Loku’s powers to destroy a necromancer that was terrorizing the kingdom.”

“But magic is outlawed in Ranello.” The Priest of Kylow, god of the sea, rubbed his chin. “King Heodis will order her burned at the stake before she’s a threat to us.”

“Or he will use her against us and try to conquer our Empire.” Jussip grabbed his ax and jumped to his feet. “I say we destroy her before she crosses the border.”

Several others echoed his sentiments. It was all too easy to get them riled up. Yes, they served their deities, but in their hearts, they were all staunch Gravarians.

All but him. He served a higher calling. Out of all the priests in the empire, Nelos had chosen him to help usher in a new age of peace.

“Silence, please.” Ivis’ voice boomed over their shouts, and once again, another burst of magic blew through the air. “Heodis knows of her abilities and has even bequeathed a title upon her for her efforts. But I do not think she will be manipulated by him.”

“Is Devarius Tel’brien still the Soulbearer’s protector?” The Priestess of the Ornathian goddess, Lireal, startled everyone with her question. Normally, she remained silent, following the nature of the goddess she served. On the rare occasions she spoke, people listened.

Jussip chuckled. “Poor Dev. Always the protector, never the Soulbearer. How’s that for a never-ending punishment?”

“Then we have little to fear from her.” The winged Ornathian priestess sank back into her silence and let the others dwell on her statement. The knight had a reputation of keeping the Soulbearers under control, never mind his unwavering loyalty to the Empire. They almost seemed convinced that the new Soulbearer was not a threat as long as Devarius remained in the picture.

Rage boiled up inside him. He needed to renew his momentum. He needed to convince them that she was as dangerous as the god living inside her. “Perhaps, but from what I’ve heard, she’s channeled Loku numerous times and has not shown any signs of madness. Could he be trying a new strategy? One where he could manipulate his Soulbearer into doing his bidding without raising any of our suspicions?”

“What are you suggesting?” Jussip’s knuckles turned white as his grip tightened around his battle ax.

“She was a witch before she became infected with Loku. I wouldn’t be surprised if he’s stretching his influence over her in a different way. Instead of turning her mad like he did the others, perhaps he’s seducing her into becoming a willing servant. Loku didn’t open the portal to the Realm of Chaos without help from his followers.”

His threat had the desired effect. Doubt filled all of their eyes.

All except Ivis. She lifted her chin in defiance. “Your point is made. We should watch her as carefully as we have other Soulbearers in the past. Spring is near, and Sir Devarius will bring her here as quickly as he can. Once she is encased in the Mage’s Conclave, we will have ample opportunity to study Loku’s influence over her.”

The others nodded their heads in agreement, but Nelos curled his hand into a fist, banging it on the armrest of his chair. “We’ve only seen a glimpse of what she’s capable of doing, and look what she did to her home kingdom. She leveled the city walls of Trivinus. I say we strike now before she brings chaos to Gravaria.”

Ivis stood, her unwavering gaze fixed on him. “Would the God of Law sentence someone without having absolute confidence she has broken any laws?”

“She has broken laws, or have you forgotten magic is outlawed in Ranello?”

“But not here.” She moved to the center of the circle, turning slowly to speak to each of the priests and priestesses in turn. “We have little concrete information on this new Soulbearer other than the rumors that have made their way here. I urge all of you to pray to your deities for guidance on this matter, but do not act until we have all the facts. If she has managed to resist the madness thus far, then perhaps we have found the most powerful Soulbearer yet.”

She finally came to him. “Does that sound agreeable to you, Nelos?”

Inside, he seethed. She had somehow managed to turn them all against him, to reduce them to cowards that would rather wait until the threat was on their soil before they struck.

“Patience, my servant. You do not need their help to dispose of Loku. I am all the power you need.”

His god’s word soothed him, and the red faded from his vision. “I will pray on the matter,” he replied in an even tone. And strike when he tells me to.

Growing up in small town Alabama, Crista relied on story-telling as a natural way for her to pass the time and keep her 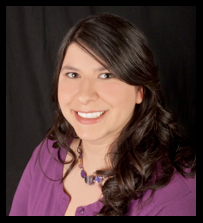 two younger sisters entertained. Of course, that also means she’s inclined to suffer some of the same maladies that plague many southern writers like overuse of simile and metaphor, exaggeration, melodramatic writing style, and the ever-popular long-winded sentence.

She currently lives in the Audi-filled suburbs of Seattle with her husband and two children, maintaining her alter ego of mild-mannered physician by day while she continues to pursue writing on nights and weekends.

Just for laughs, here are some of the jobs she’s had in the past to pay the bills: barista, bartender, sommelier, stagehand, actress, morgue attendant, and autopsy assistant.

And she’s also a recovering LARPer. (She blames it on her crazy college days)

For the latest updates and answers to any burning questions you have, please check out her webpage.