An Interview with Noah from The Light Within Me 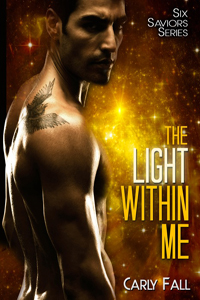 Noah offered to buy me dinner at Saul’s Steak House  in Sparks, Nevada.  I imagined him charming me the way he did Abby, but it became apparent that wasn’t going to happen.  He was strictly business.

Carly:  Thank you for meeting me, Noah.  And you were right – this is fabulous steak.

Noah:  Sure.  And damn straight.  Best place on the western side of the U.S.  Believe me, I’ve been just about everywhere, and I know.

Carly:  I’m sure you do. You can visit a lot of steak houses in two hundred and eleven years!

Okay, so he didn’t find me funny.  Back to business.

Carly:  So how are things going with the other warriors and Abby?

A slow smile crossed his face as he mulled over the question while enjoying the garlic mashed potatoes.

Noah:  She fits in really well.  She’s strong.  She doesn’t take any shit.  And any  problem she has with anyone usually gets rectified over a game of pool.  Where she wins.

It was obvious to me that Noah held nothing but pride and love for Abby.

Noah:  Great!  She hasn’t published anything, but she will.  She likes writing fiction.

Carly:  How’s the hunt for the Colonists going?

Noah’s face became dark, and he shook his head.

Noah:  I got off the phone today with Rayner.  He’s down in Phoenix with Hudson and Cohen hunting one of those bastards.  I don’t know about that mission, to be honest.  Seems things are a little fu…screwed up.  Rayner…he’s either losing it or…I don’t know.

Noah nodded solemnly.  I do too, Carly.  Rayner’s head isn’t in the game.  I worry about all of them.

Noah poured the rest of the bottle of wine in our glasses, and there was silence as we finished our dinners.

Carly:  So any kids in the  future, Noah?

He looked at me with surprise.  But then a small smile played on his lips.

Noah:  Guess we will have to see about that, he said.  I’m definitely up for it though.

Saul came by and cleared the empty dishes.

Noah:  I need to get back to the silo.

I have to admit, I was disappointed.  Noah is strong, good natured, quick with a smile and terribly nice on the eyes.  I wanted to spend more time with him, but I knew that his mind was on other things…and other people.

Carly:  Okay.  Thanks for meeting me.

Noah got up from the table, and I did as well.  He threw a couple of hundred dollar bills on our table and began to walk out.  Saul yelled out, “Noah!  You know your money isn’t good here!”

Without missing a step, Noah flipped him the one finger salute and kept walking for the door.

I looked over my shoulder to see Saul and a couple other patrons laughing.

When we were outside, I noticed that it was almost dark.

He put on his sunglasses just as his eyes started to glow a warm, bright orange.  I watched him walk away, hoping that I would eventually be able to interview the rest of the warriors at some point in the future.