“Believe in Me (1NS Series)” by Rebecca Royce 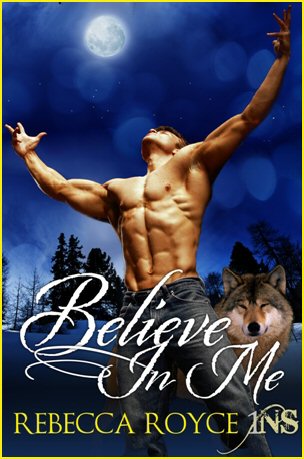 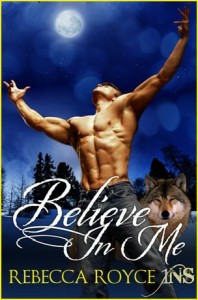 Today I’m really happy to welcome back Rebecca Royce and her new book Believe in Me.  She has also been kind enough to offer up a free copy!  Read about the book, and then enter below.

Jack Johnson, Werewolf enforcer of the Delta pack, has not found his mate. He craves a human female who can settle his soul. But is there a non-shifter in the world who could accept that Werewolves even exist let alone love one? He signs up for a 1-Night Stand hoping to find the one.

Gloria has been through hell. On the run with her young daughter, seeking an escape from her deranged ex-husband, she has no expectations of love. Just one night to do something for herself, one night to forget her troubles. She has no time for fantasy—until Jack walks into her life.

He studied her silently with huge brown eyes then finally he took a deep breath. A brief, satisfied smile crossed his lips. “I knew it.”

She let out the breath she’d been holding, feeling too much like the schoolgirl she had been, with no confidence and not at all like the woman she’d sworn to her daughter she’d find a way to become. “You knew what?”

He walked toward her, extending his hand. She placed hers in his strong grip, expecting a shake. Instead, he lifted their joined fingers to his mouth and placed a small, gentle kiss on top of it. “I knew tonight would be really special.” He smiled again and her knees wobbled. Only her nerves kept her upright. “I’m Jack Johnson.”

“Like the singer.” Oh damn. Why did I have to say that? He probably hears that all the time and now he thinks I’m a walking cliché.

He raised a dark eyebrow. “I’m sorry. I’m not familiar with such a person. I’ll do an Internet search.”

He pulled his phone out of his pocket and she realized he intended to search for the folk singer she’d mentioned. The last thing she’d meant to do was take his attention from her and onto a singer whose music she enjoyed but not enough to take time out of her one night away from her life to discuss.

She placed her hand over his phone. “I’m sorry I mentioned it. You don’t have to take the time to learn about him right now. He makes good music, but it’s not important to me that you know him or anything.”

He smiled, his eyes alight with amusement. “Okay. I don’t really follow current trends. I guess you could say that where I live gives me the ability to miss out on a lot of the current stuff out there.”

That sounded interesting. She’d like to find somewhere like that, assuming it wasn’t a cult. A remote location might actually keep Jacob from finding Katie and her. She bit her bottom lip. Searching for such a spot had led her to Alaska in the first place. Nowhere would ever be secure enough.

“No TV or internet near where you live?”

He joined their fingers. “Of course there is some. I guess you could just say that I’m a bit of an outdoorsman and I prefer spending time in the woods than on the computer.” 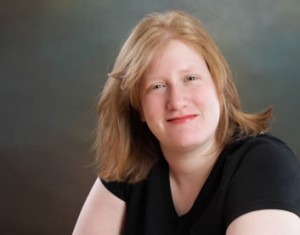 As a teenager, Rebecca Royce would hide in her room to read her favorite romance novels when she was supposed to be doing her homework. She hopes, these days, that her parents think it was well worth it.

Rebecca is the mother of three adorable boys and is fortunate to be married to her best friend. They live in northern New Jersey and try not to freeze too badly during the winter months.

She’s in love with science fiction, fantasy, and the paranormal and tries to use all of these elements in her writing. She’s been told she’s a little bloodthirsty so she hopes that when you read her work you’ll enjoy the action packed ride that always ends in romance. Rebecca loves to write series because she loves to see characters develop over time and it always makes her happy to see her favorite characters make guest appearances in other books.

In Rebecca Royce’s world anything is possible, anything can happen, and you should suspect that it will.