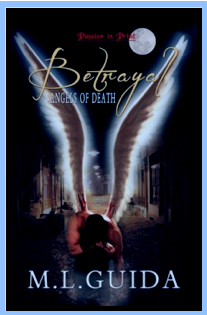 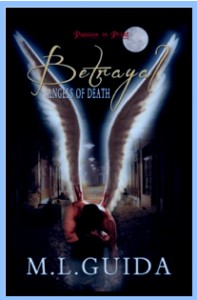 She’s been kind enough to offer us a glimpse at Chapter 1, and it looks really good!

Betrayal
Angels of Death Series Book One
By M.L. Guida

Scythe tracks his demon brother to Serenity House, a drug and alcohol treatment center. His brother wants to destroy the director, Heather Bowen, but Scythe is shocked to discover she is his angel-mate and now, he must not only save his brother’s soul, but stop him from killing the woman he loves.

In her pink nightgown and barefoot, she stood on a rough pebbly ground. A harsh male voice said, “Now, you’ll know what true pain is.”

The red-eyed man glared at her with undaunted hatred. Her foot rooted on the black tar pavement. Her legs trembled. She shrunk from his glare and wanted to hide, but couldn’t move.

Sweating and moaning, twenty-five year old Heather Bowen tossed and turned on her queen sized bed. The dream faded, and she woke with a start. Perspiration drenched her night gown, and tears streaked her face. The sheets wrapped around her legs. Her thighs throbbed. The iPod alarm clock read three a.m.

She scanned the room, but there was no sign of the red-eyed man. She sighed, but her relief was short-lived. What did he mean by she would know true pain?  Was he kidding?  Seriously?  Her life sucked.

In her dream, there was something familiar about the bright and buzzing green, red and white flickering lights. But what?  She frowned. Gas. She had smelled gasoline in her dream. Oh, shit. 7-Eleven. The bastard was with Rosemary.

She flicked on the lamp and snatched her phone and dialed Rosemary’s cellular. Answer, answer, answer, but a recording came on– “The number you have reached is…”

“Damn it,” Heather said. Why did Rosemary have to have such a piece of crap phone?

“This is information,” a bored female voice said. “City and State, please.”

“Westminster, Colorado for 7-Eleven on Seventy-Second and Lowell.”

“I’m sorry I don’t have a listing for that address.”

“Fuck,” Heather slammed the phone onto the oak nightstand.

She jumped out of bed. She tore off her Minnie nightgown and gasped. Three long scratches marred her inner thighs. She winced and wobbled to the bathroom and wet a wash cloth, and dabbed the bloody river on her legs. How the hell did that happen?  God, her legs looked like Freddy Krueger swiped her with his razor fingers.

Within minutes, she slid into her gray Pathfinder. “Ouch!”

The damn cloth seats pulled on her thighs that still pulsed from the antiseptic. She stepped on the gas. The street lamps glowed in the darkness, and the abandoned street stretched forever as her tires ate up the pavement. She glanced at the clock. Three fifteen. She gripped the wheel and turned on Kipling Street and roared down the road. At the stoplight, there were no cars, including cop cars, so she gunned the pedal. “Hang on Rosemary. I’m coming.”

Except for her speeding SUV, the dark houses remained quiet on the empty streets. With his fluffy tail curved around his body, a red fox sat on the sidewalk and watched. She shook her finger at him. “You stay there.”

Maybe this was a good omen. In animal symbolism, a red fox meant passion and desire and, God knows, she wanted her sister alive.

She peeled onto Seventy-Second avenue, running another stoplight. Huge green cottonwood trees reached for the sky along the way. Lilium, orange pixie lilies, and long ornamental grasses with whitish plumes lined the vacant street. At the end of the street, a streetlight darkened at Majestic Park. Hidden in the shadows was a car. As she sped by, red lights flashed on.

Out of the black shadows and thick trees, a dark car pulled out of a parking lot. A siren screamed into the night. A red light flared in her rearview mirror. Her stretched nerves wailed louder than the siren. For a split second, she thought about outrunning the cop, but that only happened in television.

She parked next to the curve and reached into the glove compartment and fumbled for her registration and insurance card. She yanked out her driver’s license and rolled down the window, but no movement came out of the cop car behind her. “Get out asshole.”

She slapped her information on the wheel and glanced at the clock again–three thirty am.

A dark clothed policeman got out of the police car and sauntered over to Heather. His hat hid his features. He put his hand on the top of her car. “Ma’am,” he said. He had a baby face, clean shaven, and looked like he’d just graduated from high school. “Do you know how fast you were going?”

He stood and puffed out his chest. “You were going sixty miles an hour in a forty mile zone.”

“This is my first ticket in a long time.”  She gave him her sweetest smile. “I promise I won’t speed anymore. I’m in a…”

He scowled at her and in a cold voice said, “Uh, uh. Driver’s license, registration and proof of insurance card, please.”

Well that didn’t work, but what did she expect?  Flirting and acting like a vixen had never been her strong suit. Heather sighed and handed him the information.

“You don’t understand. I tried calling my sister’s cellular phone and she didn’t answer. This never happens. Something’s wrong.”

He put his hands on his narrow waist. “That doesn’t give you a right to speed, ma’am.”

He sighed. “Where is your sister?”

“She’s working at the 7-Eleven on Seventy-Second and Lowell. Could you call and check it out?”

He crossed his arms across his chest. “That’s Westminster, not Arvada.”

“I know what city it’s in.” She gripped the steering wheel tighter. “Could you give me an escort?”

He sighed. “So, tell me again why something’s wrong?”

Author Bio:
M.L. Guida, currently, writes contemporary paranormal romance and will be having 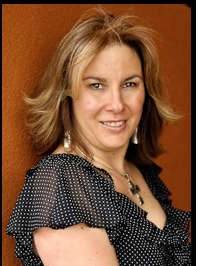 a short story, Sinful Delight, releasing in October which continues the Angels of Death series. She is pursuing her Master of Art in Creative Writing through Regis University. Her favorite past times are taking her cocker spaniel, Sadie, for long walks, going skiing and scuba diving.