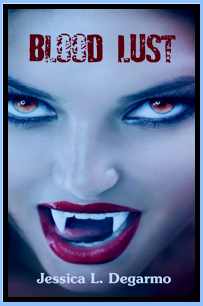 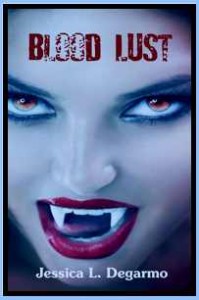 find out a little about Jessica, and then about the book. She’s giving away 15 ebook copies, so make sure to enter below.

Yes, Blood Lust is the first in the Lust Trilogy. Blood Lust is about Nexess, a vampire who serves as assassin and sex slave to Italian gang leader Antonio Bianchi. She owes him her very existence and does his bidding and fulfills his every whim. But when she meets the vampire who plays for the other team, so to speak, she is confronted with some nasty truths about herself and how she was created. She’ll be forced to choose between lust and loyalty.

I think it depends on the character. Some of them stay with me, almost like they’re haunting me, long after I write their stories. Others don’t leave much of an impression. But Nexess did speak with me while I was writing her story. She reminded me to write her the correct way or she’d come and kick my butt!

I had been talking to my publisher about genre, and vamp lit came up. I said, jokingly, “I should write a vampire novel,” and she said, “Yes, you should!” I thought we were kidding. I was wrong. She kept pestering me, and since the idea had really grown on me as well (I found myself daydreaming for a while thinking about how to make a book about vampires fresh and unique), I started it and it took right off. It was fun!

It only took a month, I think. And that included edits. It just flew out of my brain via my fingers and wouldn’t let me focus on much else until it was all done. And it morphed a few times along the way, which was great.

A romantic hero is a person, first and foremost. He has to be human, with flaws and foibles and emotions like everyone else. I think that’s a big part of it. He has to be someone we believe could actually exist. And there has to be more than looks. Looks are great, but a romantic hero has a soulful connection with his heroine that transcends sex.

If you can believe it, I really don’t like chocolate all that much. I know, gasp! But I love vanilla and to me it’s comfort food. Yummy, fattening comfort food.

My husband, of course, as he’s been preparing for the zombie apocalypse for a while now, and my three kids, because without them, there’s just no point.

Nexess was pretty fun to write, and I liked letting my sassy side show. I’m normally such a non-meanie that it was awesome to let my self-imposed limitations slide and just write the character the way she should be, and not worry about what people would think about me. It wasn’t about me, if you know what I mean. It was all about my character.

Antonio, as I don’t speak Italian. But it was fun to learn a bunch of curse words! I have really bad road rage, and I speak a bit of Spanish, French, and Russian, so my kids tell me to have road rage in a foreign language. So now I can add some Italian in the mix!

Keep going. It’s going to be hard, and not everyone can do it, but if you really, really want it, don’t give up.

Who is your favorite character of this book, and why?

Nexess, all the way. She’s one tough girl, and I like her edge, the hint of danger inside her. She was fun to write.

What is the one thing you wish an interview would ask you?  And what is the answer?

Why do you do it? I guess the answer would be because I have to. I do it for my kids, for my husband, for a chance at a better life. I also do it because it almost feels like breathing. I think it’s who I am, and it feels good to actually discover a truth about myself that was dormant for a long time. I have to do it and I love it, which makes me pretty lucky, I think.

The Lust Trilogy Book One

The beauty is the beast.

Meet Nexess. She is a vampire and gang leader Antonio’s assassin and slave, whom he keeps in chains for everyone’s protection, and his pleasure, until he needs her to go out and kill for him.

And if she disobeys him, he locks her cold, hungry and alone in a cage to face her demons until she once again bows to his brute force and craves his touch.

Then she meets Jace, a vampire from the rival gang, another killer and, as her body tells her, one she has an irrepressible urge to devour, maybe in love, maybe in war.

It’s going to be a bloodbath. Then again, it already is.

Jessica Degarmo grew up in Upstate New York and now lives with her husband, 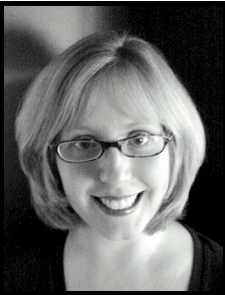 children and dog in rural Pennsylvania. When she is not writing, she is an insurance agent, the lead singer in a classic rock band, and an avid collector of gemstones.

Her publishing credits include:

How to Meet a Guy at the Supermarket (Taylor Street Publishing, November 2010)

Hooking Up (Taylor Street Publishing, May 2011)

She is currently working on several other projects. Visit Jessica’s website for more information at www.jessicadegarmo.com