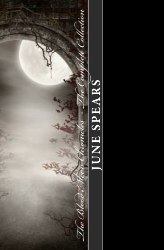 I’m very happy today to have June Spears here and her book the Blood Moon Chronicles.  June was kind enough to answer some questions for me about the book, and about her personally, so let’s take a look at the interview, and then learn about the book.  Also don’t forget to enter below to win a copy!

Yes, this is actually the entire collection put together in one book.

Three warriors, Vampire, Witch, and Werewolf, are born into the human race. When they reach of age , they must put their human lives behind them and unite to fight for the good in darkness.

It’s actually the other way around. I speak to my characters as I’m writing their plots. It makes them real to me.

It was actually a midnight spur of the moment kind of thing. I picked up my laptop one sleepless night and a month later it was complete.

It generally only took about a month to complete. But I put it away for a year and came back to it. It was very rough and needed much revising. It took me another two years to get through the revisions and editing process. But I’m happy with the over all outcome.

“Zelenia” She was created in likeness of me.

It was over-whelming at first. I felt like a fish out of water, but I am getting the feel for all the hard work that comes with marketing yourself and getting my book in front of the public.

Make sure you’re ready to be criticized. While a few people will love your work, a lot of them won’t and most are not shy to tell you straight forwardly. Take their advice, be it bad or good and work with it. It will make you a better writer in the long run.

Trust yourself and your writing.

So we can repopulate the earth. (Note from Carly – LOL!  I appreciate the sacrifice you’d be willing to make for the sake of humanity 😉 )

Definitely night, it is my somber time.

Twilight Saga (All of them)

Last book you read or the book  you are reading now?

Winter, Summer is just too hot for my likeing’s.

And now on to the book…

Three young warriors, one of them with royal blood, will be born into the human race as natural enemies. They must overcome their differences to unite and bring light back into darkness.  For there is no light without darkness, and there is no darkness without light.

However, victory does not come without a price.

A raven-haired teenager sat there, carefree , on the warm damp sand.  She stared off across the water, her back to the forest. To the casual observer, she’d seem like a normal teenage girl.

To Everit, however, she was a rare diamond waiting to be polished.

The wind caressed her skin sending her hair blowing with its breeze, the scent of roses engulfed the forest. Everit closed his eyes and let the scent of her take him to a faraway place.  He imagined her in a magical field, and the only thing that covered her were the black and red rose petals that fell all around her beautiful body.  Her simple beauty was unlike anything he had seen in all his years.

Her body tensed, about to turn, so he dashed into the woods.  He could not show himself to her.  Not now.  Not like this.

He was sent here to plant his seed, to fulfill the prophecy of the Dark Islands.  He had not planned on falling in love, but the connection he felt was too strong to ignore.  The imprint she left on his heart was stronger than his desire to remain indifferent could sustain.

Everit had watched her for weeks now.  He knew his feelings for her complicated things, but he knew what he was sent here for.  He could not fail his people.  Loving her made leaving her behind that much harder.

He made an oath to himself to find a way to protect her at a distance, even if it meant his own death. 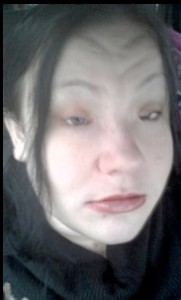 mostly poems and school songs. However, she could not escape the allure of storytelling and quickly began studying to become a novelist. She began by reading every chance she had. Mostly Fantasy and Romance novels, June’s love of writing was uncontrollable. Once she began typing, she never stopped.

June is best known for her Fantasy Novelette Series “The Blood Moon Chronicles”. She is a single mother to her only daughter Isabella Rose.