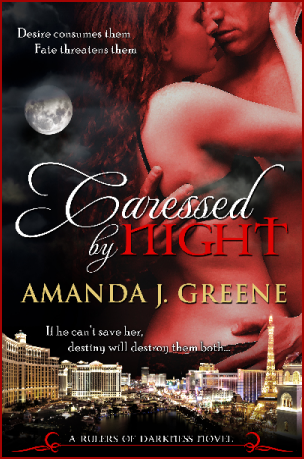 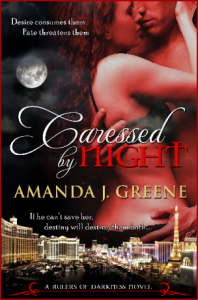 She’s got a smokin‘ vampire book out.  I got the chance to interview her, so let’s meet her and then talk about her book.

I wouldn’t say my characters speak to me, but they definitely lead me. I’ll be trying to think of what I should do next, what is the next logical step? The question really is “What would (character’s name) do?” Scenes will begin to play in my head, unfolding the next chapter or the character’s reaction to something.

It took be about a year to write and publish Caressed by Night.

May I have a little bit of both?

The hero, Dimitri, was the easiest character for me to write in Caressed by Night. I had developed his character awhile back, not knowing which series or stand-alone I had planned would work for him. When I decided to make Caressed by Moonlight, the first within the Rulers of Darkness series, into a series, I knew where he belonged.

Dimitri is an ancient vampire. In the lore I created for this series, he is the last remaining pureblood vampire. He has unimaginable powers and the gift to see into the future. He is intelligent, controlled, deadly, and all together seductive. He is fiercely loyal and all his walls come down when his mate, Kerstyn, is around. He harbors dark secrets he has never dared to share.

That is hard to say. I usually start out with a rough outline: how/where/when I want the book should begin, key scenes, and how/where/when it should end. When I sit down to write, my fingers skip across the keyboard and before I know it, my plans are changing. New ideas, scenes, relationships, and characters will just pop in my head. The books usually end up nothing like I expected they would in the beginning, except for the beginning, the important scenes, and the end. Sometimes, when I finish writing for the day, I think “wow, I just came up with that” or “I just did that, darn, now I have to go back and change a bunch of stuff”. It’s fun though and, for me, that is the most important thing.

Writing gives me an escape, I can let my imagination loose. However, in my day to day life, I’m a planner, a time scheduler and, much to husband’s irritation (since he is panster all the time, never plans anything) I get mad when someone ruins my plans – so there is always plan A, B, C, and D if necessary.

Be organized, committed, and be prepared to spend a lot of time working and promoting your book. It’s all on you, good luck, and keep your head up.

Dimitri Arsov, the last remaining pure vampire, was thought to be dead for the past four hundreds years. Now, he is back and has a score to settle with the traitor that had tried to kill him centuries ago. But as he waits for his prey to blindly step into his carefully laid trap, his overwhelming hunger for blood is triggered when he saves a beautiful art historian.

Kerstyn Ingmar’s life was normal and straight up boring until the night she is rescued by the dangerously sexy, powerfully mesmerizing, Dimitri. Unable to resist his diamond blue eyes and intense kisses, she is drawn into his world of darkness and closer to her impending doom.

While their desire consumes them, Dimitri is haunted by images of a bloody and deadly future. As his enemies draw near, he must find a way to save his mate from her destiny before fate destroys them both.

“You’ve healed,” she whispered. Her voice was rough and her throat ached from her screams. “Your wounds are gone. That…that is impossible.”

Her eyes narrowed. “What are you?”

He dropped his head. Why now? Why did it have to happen this way? He cursed, damning Fate for the tricks she played. He hadn’t wanted it to happen this way. He wanted them to take their time, to get to know one another before he shared his secret with her. Now he was cornered. He had to tell her or―no. He would not erase her memory; he could not disrespect her that way. He would not take the coward’s way out.

He had to tell her.

“What are you?” she demanded again, her voice shaking.

“I think you already know,” he said before pulling his shirt closed.

You know you gotta have it, now go and get it!

5 Howls from Bitten By Paranormal Romance

4 Roses from Romancing the Darkside 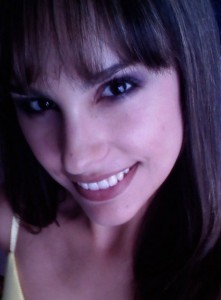 To find out where she’s at next, go here