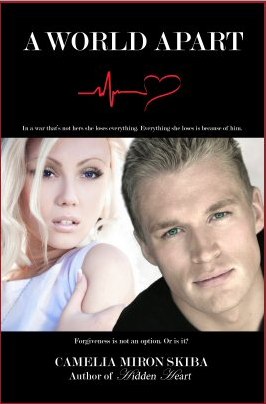 I’m very excited to  have Camelia Miron Skiba as my guest today.  She’s a very interesting woman, and today she’s written about growing up under communism, and talking about her new book, A World Apart.  And she’s giving away one free ebook – my type of gal! 😉

So without further ado…

Growing up under communism stripped us of many things—pride to be a Romanian, loyalty to a government that was busy fattening up their accounts rather than protecting its citizens, belonging to a nation older than most nations in Europe—but what it didn’t take away from us was the freedom to dream and be creative.

Without electricity and food we learned to entertain ourselves making up games and toys. My sisters and I had one doll each. Summer vacations were spent in remote villages where we weren’t allowed to take our dolls for fear they might be destroyed. Empty boxes and sticks then became our toy dishes. Corn replaced our dolls, sometimes taking us hours walking between rows of corn to pick the perfect doll. Blond or redhead, the longer the hair (meaning the silk on the corn) the better. Twigs formed the limbs. My mom’s aunt used to be a seamstress and her leftover fabrics made for awesome clothing. Dirt and water was the best dessert our dolls had ever tasted. Leaves made for perfect beds where princesses slept until knights came to rescue them…

In looking back, they might’ve resembled anything, but dolls. But to us they meant as much as to a girl playing with her first Barbie.

I might not have had an abounding childhood, but I definitely grew up creating heavenly worlds, and dreaming that anything is possible as long as you want it badly enough. I should know that—I now live the American dream.

And now about the book: 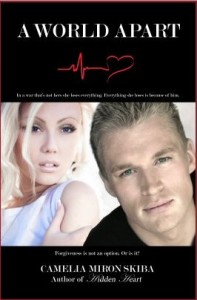 In a war that’s not hers, she loses everything. Everything she loses is because of him. Forgiveness is not an option.

Lieutenant Cassandra Toma, trauma surgeon in the Romanian National Army starts her deployment at a joint-unit air base on a wrong foot, clashing on her first day with her new commander, Major David Hunt. Her rebellious nature and sassiness rival her excellent performance in the operating room—the only reason why she’s not reprimanded, or maybe not the only reason.

They meet. They clash. A forbidden passion consumes them with the intensity of an erupting volcano, leaving her heartbroken and him with tarnished honor and pride as an officer. The only way out for David is disappearing into the dangerous warzone in Iraq. Their flame was supposed to be over when destiny brings them back under the same roof, this time with a common goal—to find Cassandra’s brother, Maj. Robert Toma, kidnapped by insurgents while on patrol.

To rescue Robert, Cassandra and David put aside their resentments, uniting forces against a common enemy. Trying to forget the painful past, Cassandra opens up to give David—and their love—another chance. What she doesn’t realize is that her anguish is the result of David’s impetuous action—one reckless choice he made for which she may never forgive him.

His mistake, his secret, could cost them both the love they’ve finally found.

“You need to calm down,” David inched closer to Cassandra, fixing her with such intensity her face caught fire.

“Calm down? You want me to calm down?” she snorted, jutting her chin up, hands on her hips.

“Yes. You need to calm down. What was that all about? Why are you so furious?”

“You want to know why I am so furious?” Cassandra grounded her feet apart and pushed her chin forward.  “You really want to know? I’ll tell you why. I’m so sick of your bigheaded attitude, of your ‘I’m an American—I do whatever I want’ arrogance!” She shoved a finger at David’s chest, poking it and leaning forward. Her gaze locked on his, their faces close. “You act like some god on our grounds, like you’re doing us a big favor, honoring us with your royal presence as if we are a bunch of idiots you cannot stand. Anything that comes your way that is Romanian, you dismiss with such vehemence one might think it’s poisonous. Nothing we do or have is good enough for your nose.

“But let me tell you something, my friend. My people might not have everything so technical and so advanced, but they are good and hard-working people. They have good hearts and above all, they have dignity. When you live for generations under communism and are treated the way we were, maybe only then you can understand what it means to be so ‘primitive’. To be given nothing and be expected to work wonders. Your standards and ours obviously don’t match, but who are you to judge us? What do you know about us that gives you the right to treat us this way? Huh?

“And for your information, in case nobody had the courage to tell you, this is not our war.” She made a large circle with her arms. “We haven’t asked for it and we are doing you a favor allowing all of you to be on our soil. And not vice versa.” Cassandra straightened her back, pushed away a curl that fell on her face and held her arms up. “Here you have it, I said it.”

She walked around David, opened the door and before leaving, said without looking back, “And don’t forget to write me up.”

David shook his head, scrunching his eyebrows. “Have you looked around, Cassandra? Do you have the smallest idea where we are?”

“Yes,” she jutted her chin up, her voice a rasp, “in a rat’s hole I don’t give a damn about. I could care less about the people here, nor want anything to do with them. This is not my war. I said it before, I’ll say it again. The only reason I’m here is for Robert, and Robert only.” She inhaled deeply, squeezing dreadful tears between her eyelids. “If you don’t want to help, that’s fine. But don’t try to stop me.” She turned to walk away, but David caught her wrist. “What—”

“Look around you. I get it you don’t care about being here, or about the people, but you have a choice—the choice of staying alive and safe, here on the base. They,” he pointed at the beds, “didn’t.”

Three soldiers occupied the room, one without an arm, another without a leg. The third one had bandages around his head, half of his face disfigured with burns.

Her stomach twisted, a strong taste of bile rising in her throat.

“And what am I supposed to do, David? Just sit around and wait?” She glanced at Laura who, standing in the doorway, waved a nurse not to enter. Grateful that Laura spared her the embarrassment of being heard by others, she turned to David and said, “I have to at least try to find him, I have to.” Her eyes burned with tears, her voice choked up. “He is somewhere out there, and must be found, alive…” Her stomach turned to a fire pit, pain forcing her to bend forward.

David grabbed her by the shoulders and for a moment, Cassandra thought he’d embrace her. Instead, he blinked quickly, pushed her slightly away and rubbed her upper arms, shaking his head, his voice heavy. “Cass … You won’t be allowed to go anywhere. If your assignment is here on the base, in the hospital, then you’ll follow orders. This is not Romania.”

She opened her mouth to speak, but David raised a hand. “There’s no point in arguing, trust me.” He limped around the first bed, put gloves and a mask on and added, “Come, let’s finish the rounds.” 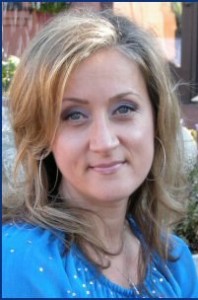 I’m Chris’ wife, Patrick’s mom and Bella’s owner. During the day, I’m the assistant to the Director at SESE at Arizona State University, and romance’s slave at night.

I moved to the U.S eight years ago, following my heart and the man who stole it. I love comedies, historical dramas and happily-ever-after stories. English is not my native, not my second, but my third language.

Some fun facts about me:

Each year I participate in one big event that requires me to physically train. My biggest sportive accomplishment was the 3-day 60-mile Susan G. Komen Walk.

Annually I pick a color I decree my favorite (this year it’s salmon).

I refused to text until 2010, always preferring to hear voices rather than sending emotionless messages. Politic bores me to death and I have no tolerance for arrogance.

“A World Apart” is my second book. My debut novel “Hidden Heart” came out March 2011.

To connect with Camelia:

To Buy the Book:

Leave a Reply to Sherry Gammon YA Author Cancel reply