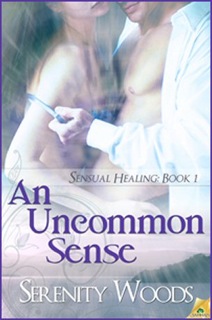 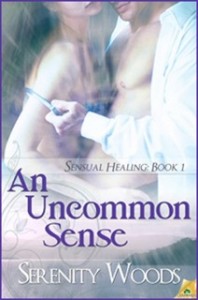 I’m really happy today to bring you Serenity Woods and her book, An Uncommon Sense.  She has also been kind enough to offer up an ebook copy for a giveaway.  So lets take a look at the book, and then you can enter to win!

All six senses tell him she’s the one.

High school science teacher Grace Fox doesn’t believe in any of that woo-woo stuff. So it’s easy to laugh off her friend’s prediction that she’ll have swear-out-loud sex with the next man who walks through her classroom door.

Who knew that local celebrity Ash Rutherford would have the time to attend his daughter’s parents’ night? Or that the Viking lookalike would trigger an attack of klutziness? He may or may not see dead people, but he certainly got a good look up her skirt.

A doctor turned medium, Ash spends his days communicating with unseen spirits. When it comes to his moody daughter, though, he hopes down-to-earth Grace will give him some insight. The racy lingerie she hides beneath her prim and proper clothing is an added bonus he didn’t expect.

Their attraction is instant and blazing hot, but Ash has been burned before. His ex-wife didn’t believe in his abilities, and no way is he going down that road again. At least not until Grace accepts the possibility there might be life after death. And the ghosts of his past are laid to rest.

Product Warnings:  Contains a real live Viking, proof of life after death and sex on a 1970s sheepskin rug, but absolutely no Barry White.

“You are going to have wild, passionate, swear-out-loud sex with the next man who walks through the door.” Mia read the prediction aloud from the astrology section of her magazine.

“Even if I did believe the position of the stars could tell my future, I’d know you made that up.” Grace continued to study the latest batch of science exams. “And anyway, that doesn’t sound remotely like something I’d do.”

Grace put a big red cross against the answer she’d just read. “Very funny. I meant swear. I would never swear during sex. Very unladylike.” She read the next question. What happens to your body as you age? And then the answer. You get intercontinental. Massaging her forehead, she drew another red cross. Jodi Rutherford barely appeared to have retained enough information from her biology lessons over the past ten weeks to fill a postage stamp.

“That explains a lot.”

Grace shot the teacher sitting next to her an exasperated look. “What’s that supposed to mean? And will you please stop trying to distract me? I want to get these finished before I go home.”

Mia grinned. It was nearly seven o’clock on a typically cool New Zealand October evening, and moths had started to flit around the strip lighting. Even though the parents’ evening had been the busiest of the year, the stream of visitors to the auditorium was starting to wane, and the teachers sitting at the rows of tables were beginning to pack up their laptops and books. Neither she nor Grace had seen a parent for fifteen minutes, and she was quite clearly bored. “I meant that your reaction to my prophecy accounts for why you’re still a spinster at the ripe old age of twenty-nine. If you’ve never been with a guy who could make you swear out loud during sex, it would explain why you haven’t come close to settling down.”

“Don’t call me a spinster,” Grace grumbled, turning over the page. “And anyway, I’m only a year older than you. You make me sound like I’m eighty-five.”

“What’s wrong with the way I dress?” Grace frowned as she looked at her clothes. Her neat pencil skirt and white shirt were hardly retirement-age clothing. Okay, maybe the flat, sensible shoes, hair in a bun and glasses were a bit more “traditional schoolmistress meets university librarian”, but she hardly looked as if she should be vacationing with the over-fifties.

“Because I don’t have a skirt above my knees and my shirt unbuttoned to my cleavage?”

“Grace, honestly. You’re beginning to worry me. You really should try to have sex at least once each decade, you know, or you’ll forget how to do it.”

Grace stared at the floor in front of her desk and tipped open her hands in protestation. “Mia…do you mind?” When her colleague remained quiet, she tried to concentrate on the paper in front of her. Then she groaned. “God, listen to this. ‘If conditions are not favourable, bacteria go into a period of adolescence.’ I mean, honestly.”

Mia laughed. “Whose paper is that?”

She put another red cross on it. “Jodi Rutherford’s.”

“Ooh.” Mia perked up. “The medium’s daughter? I didn’t know you taught her.”

Grace sighed. “Oh Lord, don’t you start. What is it with the women in this school? One mention of that guy and I swear their bodies undergo some kind of chemical change, turning them into goo.”

“Grace Fox, seriously, have you not seen him? What the hell is wrong with you?”

Grace put her pen down impatiently. “Of course I’ve seen him. Well, a photo of him. You can’t avoid it. His picture’s been plastered over half of Wellington for the last week, for crying out loud. But he’s just a guy. Two arms, two legs. Nothing that warrants all the mooning about.”

Mia shook her head. “Now I know there’s something wrong with you. Sweetheart, Ashton Rutherford is sex on legs. Seriously. He’s, like, six-foot-four and played lock for the Hurricanes.”

“That means absolutely nothing to me, Mia.”

Mia rolled her eyes. She was an avid Rugby Union fan. “They’re the tall ones who jump up at the line-outs.”

“Is that supposed to impress me?”

“Don’t you find him a little bit intriguing? A rugby-playing doctor who became a clairvoyant—don’t you think that warrants even a little bit of interest?”

Grace snorted. “Any man who gives up a serious profession after years of training to become a fortune teller needs his head tested.”

“He doesn’t tell fortunes. He’s a medium. He speaks to dead people.”

Grace gave her a look. “This conversation does not sound like something I’d be even vaguely interested in. I’m packing up now. It’s nearly seven.”

Mia sighed and started logging off on her laptop. “I can’t believe you didn’t tell me he could have been coming to see you tonight.”

“I honestly didn’t expect the guy to turn up. I’m sure interest in the welfare and progress of his only daughter is way beneath such a superstar. On my to-do list, informing you which students’ parents were coming tonight was right at the bottom.”

“He wouldn’t be at the bottom of my to-do list,” Mia mumbled.

Grace shuddered. The ultimate insult. “Thanks.”

“Don’t mention it. You seriously need to get laid, though.”

Tell me about it. She didn’t say that, however. Instead, she said, “For the love of…will you desist?”

“Next guy that walks through the door, I’m telling you. Look—the door’s opening…”

“Please don’t let it be Professor Michaels,” Grace muttered as she got on her hands and knees to pull the plug of her laptop out from underneath the wall heater, making Mia laugh out loud at the mention of the overweight, balding, officious deputy principal who drove them all to distraction.

Mia’s laughter turned abruptly into a gasp. “I don’t believe it.”

“What?” The lead was stuck. Grace pulled it hard, but it had somehow got wedged against the plug of the heater and refused to come out.

“Well, this is going to be interesting.”

Grace took the plug in both hands but it still failed to move. “Sweetie, I don’t care if he’s Robert Downey Junior, I am not having sex with him.” She leaned all her weight on the lead, and all of a sudden, it gave and pinged out of the wall. She fell backward, banged her head and ended up sprawled in a most ungainly fashion facing the parent who was waiting at the foot of her desk.

“If you’d turn down Robert Downey Junior I guess I don’t stand a chance,” he said, amused.

Grace looked up at the face of the man she’d seen plastered on billboards all across town and then turned slowly to face Mia, whose eyes were practically falling out of her head. Mia stared at her and made a slight gesture with her hands, bringing them together, making Grace realise she was facing the guy with her legs open, giving him a splendid view right up her skirt.

And now let’s get to the giveaway:

ABOUT SERENITY AND WHERE TO CONNECT WITH HER: 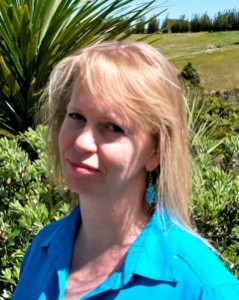 Serenity Woods lives in the sub-tropical Northland of New Zealand with her wonderful husband and gorgeous teenage son. She writes fun, flirty, and sexy contemporary romances for the modern woman who likes intelligent, spirited heroines, and hunky but approachable heroes. She’s won several romance writing competitions and is a member of the Romance Writers of New Zealand. She would much rather immerse herself in reading or writing romance than do the dusting and ironing, which is why it’s not a great idea to pop round if you have any allergies. You can check out all her books at http://www.serenitywoodsromance.com.

To find out other stops on Serenity’s tour, click here: