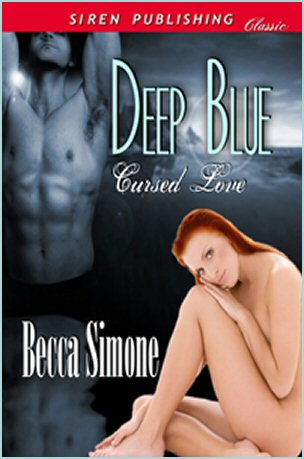 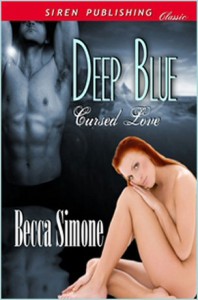 Today I’m happy to have Becca Simone here to talk about her book Deep Blue.  Becca has also written a little bit about the book, a twist on the Beauty and the Beast Myth.

When you think Beauty and the Beast, you think of the Disney movie, don’t you? No, it’s not a trick question. That’s what I think of, too. But the beauty and the beast story dates back to mythology in the second century.

The story version we’re all familiar with now was published in 1740 by Madame Gabrielle-Suzanne Barbot de Gallon de Villeneuve. It’s said that the story was told in French and Italian salons to instruct marrying-age girls that they should treat their husbands well and see past his looks and beast-like qualities. If they did that, they’d find out they actually did end up with a prince among men.

So basically what they were telling these girls, “Your husband is an ass, and an ugly one at that, but if you treat him like a prince, maybe he’ll become one.”

Yeah. That’d go over well this day and age, wouldn’t it?

Some notable Beauty and the Beast stories over the years are The Hunchback of Notre Dame, Phantom of the Opera, and King Kong.

For the life of me, I can’t think of any more current examples. What about you? Can you think of any?

Under the light of a full moon and lurking in the restless waves of the deep blue sea, someone or something watches a ship cutting through the dark waters.

Insurance fraud investigator Kate Hargrove is looking into the disappearances of women from a cruise line. She soon “disappears” herself when pulled undersea by a giant sea creature. Now, this beauty is trapped beneath the sea with a desperate beast.

100 years ago, Thaddeus Ryker was cursed and banished to the ocean depths. He has only three more days to find someone to love him in his monstrous half man/half sea creature state or he’ll spend eternity as a monster of the sea.

When her terror subsides, Kate realizes she’s both attracted to and repulsed by Thaddeus. As she gets to know him, she discovers a sexy, haunted man. Can she learn to love him – a monster – in just three days?

“Then shut up and kiss me, Thaddeus,” she muttered.

He lifted his head. “You modern women are so demanding,” he said, before clamping his mouth onto hers. This time, he was the one in control, his tongue demanding and thorough. “Heaven on earth, you taste amazing,” he said, coming up for air.

“And this isn’t my tastiest body part,” she whispered, feeling incredibly wanton and frisky, so unlike how she usually was with men. This whole situation was so surreal.

His chuckle vibrated behind her ear. “What is your tastiest part?”

She giggled and dropped her head back, allowing him better access to the sensitive skin of her neck. “You’ll know when you find it.” God, this was fun.

His tongue dipped into the shell of her ear. He blew on her softly. “Mmm, you taste pretty good right here,” he murmured. He bent her backward over his strong forearms, and kissed a path down to her breasts. He met her eyes, grinned, and then his mouth closed over a nipple, drawing it into his hot mouth. Every suck pulled deep in her pussy. If she didn’t know better, she’d think he was kissing her clit at the same time as the pleasure radiated between her legs.

“You’re doing that mind thing again, aren’t you?” she asked, her voice breathless.

“I’m sorry, my love. I have been too long without a woman and I’m afraid I can’t keep my lusty thoughts from the sweet spot between your legs.”

That sweet spot ached and she squirmed against the rock. “No apologies necessary,” she gasped.

Becca Simone was just eleven years old when she read her first romance novel. It was about the same time that she realized making up stories was way more exciting than reality. Thus, an author was born. Becca lives in the Pacific Northwest with her husband, two kids and a menagerie of pets.

For more of the tour, go here: