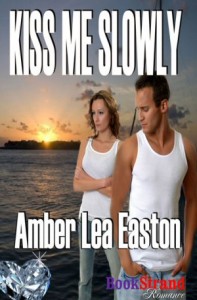 Today I’m really happy to host Amber Lea Easton.  Amber is here today to talk about why she writes romance, and then we are going to find out about her book, Kiss Me Slowly.

There comes a time

when nothing is meaningful

except surrendering to LOVE.

I’m a firm believer in romance and love.  Call me naive if you’d like or a Pollyanna if you choose, but there’s something about a happy ending that really lights up my world.

Let me tell you about my own love story.  When I was twenty-seven, I met a tall, blond-haired, blue-eyed mountain boy named Sean.  He swept me away from our first meeting and proposed to me three weeks later after filling his apartment with wild flowers he’d picked along side the road. I said yes without hesitation.  Yes, yes, yes!

My “yes” sent my friends into intervention mode.  I was never the relationship type and my friends knew this.  I couldn’t care less about having a boyfriend, let alone getting married.  Oh, I loved men, that’s true.  Back in my twenty-something days, I had more guy pals than girlfriends.  I was okay with being single.  But Sean…wow…the man sent my nervous system into electrical overload.  Ba-da-bing-ba-da-BOOM!

Long story short–we married six months later and ended up having two gorgeous kids.  Happily ever after, you ask?  No.  He died six years ago, leaving me a widow with two kids to raise solo.

I still love him, probably always will.  That doesn’t mean I can’t love someone else one day–I’m sure I will–but Sean is imprinted on my heart.

Love is like that, you see.  It doesn’t end despite the vows that say “til death do us part”.  Its reach is infinite.  But, because I love love, I know I’ll find space in my heart to love someone again.  Differently, yes.  Equally, I hope so.

So, you see, I write romance because I believe in true love, soul mates and passion. I know love exists.  I also believe that, if you’re not in love with something whether it be your hobby, your life, your pets, yourself…if you’re not passionate about something…then what’s the point?  Yes, I’m a widow who’s flying solo at the moment, but I love my writing, my kids, my pets, my friends, the view outside my window, my ability to laugh at myself…I love.

To me, love is all that matters at the dimming of the day…and that’s why I write romance novels.

AND NOW ABOUT THE BOOK

Trapped in a set-up that could have him in jail or dead by Monday, Jonathan Alexander trusts no one in his inner circle. It’s Saturday. His only hope is Grace Dupont, the best forensic accountant in Miami. But there’s a glitch with that idea. She’s also his ex-girlfriend who’d rather watch him drown than throw him a life vest. Going to her feels desperate…because he is.

Grace enjoys seeing Jonathan squirm. On your knees boy, she thinks as he pitches for her help. Always a sucker for the dark-haired-blue-eyed boys, she risks her precariously balanced life of secrets to help him. Helping him slaps a target on her back–she’s the key to proving his innocence and that’s a bad, bad thing.

Tangled up in a whirlwind of conspiracy, murder, million dollar money trails and diamond smuggling, Jonathan and Grace flee to the sea to stall for time to prove his innocence. Romance sizzles beneath Florida Keys’ sunshine. Both scoff at happy endings. Both doubt justice. Both know each kiss could be their last.

AN EXCERPT FROM THE BOOK:

“You have blood on your dress.” He fingered the strap in question that had slipped off her shoulder. “You should probably take it off.”

“Careful. We can’t go there.” Sand clung to her neck and stuck to the tangles in her hair. The light from the bedside lamp shadowed her face.

“I meant change out of it, not…well, maybe I meant take it off. But then we’d be crossing lines that you don’t want to cross.” He let his fingers trail down her arm. “That would be wrong. Terribly wrong.”

“You are nothing but trouble.”

“You always liked trouble.” He rested his right palm against the bed, supporting his weight on his healthy arm.

“Listen carefully to me.” She pressed her finger against his lips. “I’m high on adrenaline, we’re alone, no witnesses, no regrets. One kiss won’t hurt anyone.”

“No witnesses, no regrets…” Heat flooded his veins. “Adrenaline…”

“If I don’t do this now, I’ll hate myself in the morning.”

“You mean you’ll regret it when they lock me up in the morning and throw away the key because you didn’t kiss me one last time?”

“Exactly.” She straddled his lap.

“You weren’t supposed to agree.” He smiled despite the circumstances.

She kissed him as if savoring the taste. Her hair fell forward, locking them in a caramel-colored veil of intimacy. Eyes open, they stared at each other as their lips moved against each other’s.

His hands slid up her long thighs, over her panties and pressed against the smoothness of her back. Every stroke of her lips against his awakened pure need in his veins. He no longer cared about what was right or wrong. All he wanted was her mouth on his, his hands on her body and her skin against his.

With a quick yank, she pulled her dress over her head. Breasts bared, she pressed him down on the bed and laughed against his mouth. “This is crossing all kinds of boundaries and breaking every rule I can think of.”

“Just like the old days.” He smiled against her lips. His hands moved over her bared breasts. The pain in his shoulder failed to slow him down. He didn’t know who groaned or if they both did, but the sensation of her flesh filling his palms trumped common sense.

Her bare foot slid over his leg, hands curled into his hair, and body flattened against his. All the anger, the terror and confusion poured from him as he deepened the kiss with an urgency that bordered on desperation. The silky warmth of her mouth erased his pain. Kissing her felt like coming home from an exhausting, lonely journey.

“A kiss…that’s all I wanted,” she muttered against his chin. A shiver quaked through her body when she sighed.

WHERE TO BUY LINKS: 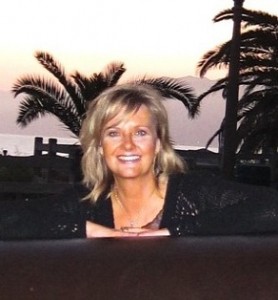 Amber Lea Easton grew up in Hartford, South Dakota, where she spent her time daydreaming of big adventures over the horizon under a giant blue South Dakota sky. Now living in Colorado, she is an avid traveler who incorporates her real life travels into her novels as much as possible (minus the illegal activities her characters become immersed in–she swears). To her, setting is another character in the novel and often serves as an inspiration. Although she is a romantic suspense author, she’s an avid reader of all genres or “whatever turns her on in the moment”. Love is her motivation for all things–whether it be writing, traveling, playing with her dogs or hanging with her two teenagers–if it’s not done with love, then what’s the point?