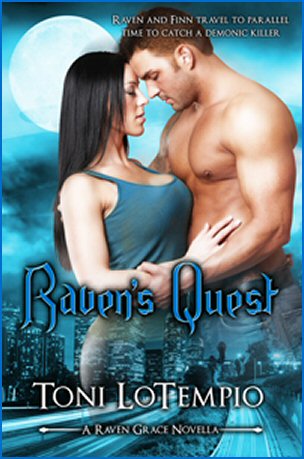 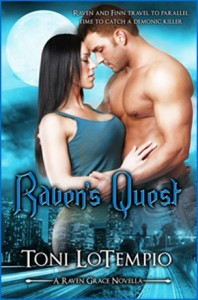 Today I’m pleased to be hosting Toni Lotempio and her book, Raven’s Quest.  I’m also reviewing the book, and I will post my review within a week when I finish it.

Tony has been kind to also offer up an ebook for a giveaway!  To win, leave a comment.

What I can tell you so far is that it is a fun, interesting read with an interesting premise and characters.

In this short novella, Shapeshifter Raven Grace and her psychic lover, Finn McPhee, are back, traveling to parallel time in search of a demonic killer.

EXCERPT
The woman staggered into the center of the floor, weaving like a drunk. She looked to be in her early thirties, her full red lips matching the nearly non-existent dress she wore of the same color. “Death to all” she rasped, staggering forward. Her hand shot upward, and the large butcher knife there gleamed with fresh, red blood.

Raven pushed forward, her eyes darting around the large room, desperately seeking Finn. She caught sight of him. He’d been pushed back against a marble pillar, and was slowly inching forward.

His voice, inside her head: Got your weapon?

She nodded grimly, even as her fingers reached inside the useless purse slung carelessly across one slim, bare shoulder. She pulled out her weapon, cocked the safety, and plowed forward.

Out of the corner of her eye she saw Hedy do the same.

And then the air was rent with another, commanding voice, a feminine one.

“Drop it. Drop the knife now.”

The knife wavered wildly in the air as the woman took a step backward, her eyes glazed over and glassy. The speaker moved into the center of the room, and both Raven and Hedy stopped in their tracks, taking in the tableaux before them. The woman who stood calmly training her stunner on the knife-wielder, was thirty if she was a day and looked to be in perfect shape, if the curves beneath the form-fitting white Dior number she wore gave any indication. Her black silk fall of hair, parted in the middle, framed a face Raven knew George would describe as “million-dollar”, but there was a steely set to her jaw, a coldness in the thin set of her lips, that kept her from being beautiful. Still in all – she was a package no man would kick out of bed, of that Raven was certain.

The newcomer moved with the speed of a striking cobra, gripping the knife hand and twisting it backward. “I said drop it.”

Fingers went limp, and there was a sharp clink! as knife met floor. The woman whipped one hand out, and the next second shiny handcuffs had been slapped on the offender.

“I need help here,” the brunette snapped. “She needs a doctor, she’s obviously drugged. Someone get a medic – what are you all waiting for?”

On the podium, Sully cleared his throat. “You’d all best listen to her, and get used to it. I realize this isn’t exactly the best introduction, but…” His arm swept out, indicating the woman. “My successor…Captain Darla Barnes.”

You know you want it, now go and get it!

Author Bio: Toni is an admin by day, author by night. In between working and writing, she’s also mom to four bratty cats, including ROCCO the Blogging Cat, who has his own blog (www.catsbooksmorecats.blogspot.com) Toni is at work on more novels – you can write to her at, or through her agent, Josh Getzler, at HSG Literary Agency.