CBLS – Starline (Book 1, Warriors of the Elector)” by Imogene Nix 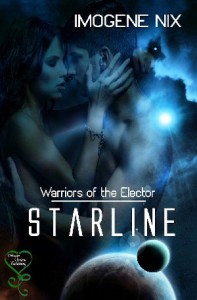 Today I’m excited to host Imogene Nix.  I had the chance to interview her, and I’m happy to say she likes chocolate and wine as much as I do (she makes her own wine!) and her characters talk to her as well.  🙂  And she’s totally ready for the zombie apocalypse!

So onward to my interview with Imogene…

Is this book part of a series?

Yes, it is the first in the Warriors of the Elector Series

If so, can you give a general description of the series?

Science Fiction Romance, where the Elector is a stealthship spearheading the hunt for Crick Sur Banden, the leader of the Rogue Ru’Edan.  Three stories, three men and three women.

Do your characters talk to you?

Yes, they do.  Regularly.  Until I finish their tales anyway *vbg*

What do they say?

They are the ones who tell me their story.  I just write it and then edit the story.

I don’t really know how to describe my inspiration.  I sat down one day and said, “I’m going to write a story.”  Seriously!  It made sense to write a SciFi Romance though, because I love the genre.  Firefly and Star Trek ruined me for life.

Getting the first draft down took me 2 months of nothing but writing.  In that time, I did minimal of anything else.  Then several months to edit, with help from others.

Gee, that sounds like something my husband would ask.  Okay, let’s see.  Hubby and our two daughters – there’s three.  A computer tech with electrical skills to keep the internet running and electricity for hot water and ultraviolet lighting.  Oh and electric fences *vbg*

Easy?  Wow,  I really don’t know.  Maybe Chowd.  He is a secondary character of whom you will see a lot more.  So many layers but so loyal.

Jemma.  Again, you only see snippets of her in this book, but her layers are so much more difficult to come to terms with.

Tell us one thing about your personal life that you haven’t shared before.

I love to make wine and am seriously addicted to chocolate.  (Note from Carly… SEE???  I TOLD YOU SO!!)

If you had to sum up advice to a new writer in two sentences, what would you say?  Take your time and don’t rush.  Get yourself involved in a writers society.  For me, my savior was the Romance Writers of Australia.

I would like to thank Imogene for answering my sometimes off the wall questions, and now, let’s learn about this great book!

One man, one woman, one psychotic alien. Now the race is on to save humanity. Past. Present. Future.

Mellissa Davis is your average bookstore owner and aspiring romance author until one day an electronic book pad slides through the mail slot of her little bookstore. Now all she has to worry about is a sexy time travelling stealthship captain, staying out of the way of the bad guy and saving the universe, past and present. Not much to ask…

Duvall McCord, an up and coming stealthship captain travels to the past to stop the Ru’Edan leader, Crick Sur Banden, destroying the Earth Empire of the future. His mission? Retrieve the handbook for the Elector. He doesn’t count on love, or saving the woman of his dreams. But time is running out. This warrior must do everything he can to stop the plot…

“Sir, you have an encoded message incoming from Admiralty,” Engineer Corbin Jard stated. A young officer, new to Duvall’s team, he looked up expectantly at his Captain. His pretty-boy face showed eagerness, and he looked ready to jump up and grab something, anything his Captain commanded. Jard had joined the crew just as the ship prepared to make its maiden journey. A big promotion for one who had, until recently, served on the Star of Ishtar.

“I’ll take it in my office, Jard,” Duvall said, striding through the automatic doors and heading to his office. The crew of the Elector carefully trained for multi-tasking, and given the size of the crew and the status of a Stealth Ship, if one officer sustained injury, someone else could continue their role, and the crew while new, had started integrating nicely.

Hopefully this lead would take them to the handbook they sought, he thought, something to give them a break in the ongoing hunt for Crick Sur Banden. His neck itched, and while he didn’t consider himself superstitious, he never neglected to listen to what his senses told him, and right now they screamed that he needed a lead and quickly.

Once in his office, he secured the door and opened the secure link. “McCord here.”

“Duvall, I have a lead, or something, for you.” The earnest voice of WO Meredith Gentry came quickly. Much as he looked forward to hearing from her, he did not expect to. Meredith continued her work safely tucked away on Aenna. Didn’t she? “I don’t have a lot of time,” she hurried on. “I think they know I suspect something. I rigged the handbook with a tracking device. The secure code is—” He could hear the sound of voices behind her. “Quickly, it’s V422J53. That will allow you to access the secure feed,” she said as he jotted down the tracking device’s code. He could hear her taking quick breaths.

“It moved through the gate outside Eris on code LX543GH4.” He knew that code. He had just generated one giving a similar time path.

“Meredith, are you in a secure location?” he demanded forcefully. Another hitched breath floated through the secure line. He gripped his table and leaned forward, not that he could do anything. The sounds faltered from thousands of miles away. “Meredith?” His sister was in danger, and here he listened on a ship so far away. Barsha! He should have protected her.

“Duvall, you need to access frequency…” Quickly she rattled off the information he would need to follow the device as he tapped into his unit. “Oh God! They’re here—” Abruptly the line went dead.

“Meredith? Meredith?” Now he leaned over the device. Quickly accessing the Admiralty, he demanded a connection to Gentry. A voice informed that Gentry could not be raised, and the voice asked if someone else could help with his query. His demands to talk to the Admiral met with a similar fate. Frustration welled upward, nearly choking him as he disconnected. He knew he couldn’t go back and didn’t know who else to contact. He had to maintain a chain of silence while investigating, especially when the Admiralty could be breached. Never had those words choked him so much.

His heart thudded as he sat back down. Could more than a single infiltrator exist? He hoped not, but the itching at his neck grew in intensity, and he feared the worst. Tapping the information Meredith had given him into his desk screen, he started toward tracking the handbook, thankful for the foresight of officers such as his sister.

The blip of the machine echoed through the room; an answer bounced back to him. A heading he would never have guessed. Toward the Time Port. Well, thank Eshra, if he couldn’t go back to help Meredith, he could at least work toward retrieving the item she had risked so much to track. Quickly he hailed the bridge. “Full speed toward the Time Port,” he instructed, just in time to see the blip disappear.

Where to buy it: 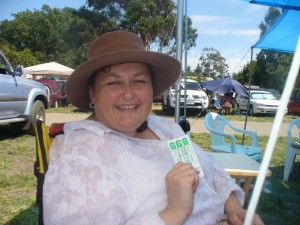 A mother of two, compulsive reader and bookstore owner. Imogene lives in regional Queensland, Australia with her husband, 2 daughters, dog, cats, guinea pigs and chooks. She has a particular fondness for Vampires, Star Ship captains and things that go bump in the night.  Visit Imogene at http://www.imoginenix.com.