CBLS – “The Girl’s Guide to Dating Zombies” by Lynn Messina 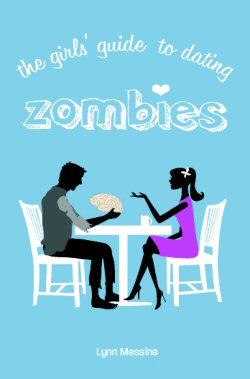 Today I’m really excited to have 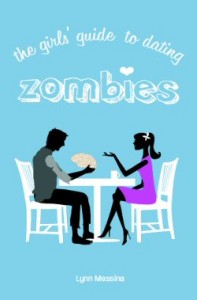 Lynn Messina here to talk about her book, The Girls’ Guide to Dating Zombies.  I know..Zombies…ewww!  However,  this book looks absolutely hysterical and like a really fun read, and I can’t wait to check it out for myself!

First, let’s talk to Lynn, and then on to the book.

I’m not sure they talk to me so much as near me. They have long, involved conversations with each other in my head and it’s all I can do to hold on to them long enough to record them accurately. I typically think in dialogue. Paragraphs with description or action are a lot harder for me.

I was on an Internet talk show promoting Little Vampire Women, and we started the inevitable debate of vampires verses zombies. I was emphatically on Team Vampire because zombie have no learning curve so I couldn’t imagine how they could be anything other than mindless, blobby, brain-eating monster things. But as soon as I thought that, I began trying to figure out how to make them more than mindless, blobby, brain-eating monster things. And, well, from there, it was just a matter of coming up with the most outrageous premise possible.

This book took me four months to write and eight months to rewrite. I had a baby in the middle of the revisions, so that’s why it took me a little bit longer than usual = )
If you were one of the five people left after the zombie apocalypse, who would you want the other four to be?
I’m torn between picking practical people with survivalist skills who know how to survive for a decade on an ice floe in Antarctica, leading scientists who could figure out a cure and my friends and family who would make my last days funny and sweet. Ultimately, I imagine a Whedon-esque ragtag team of misfits, so I’m going to go old-school twentieth century and say Buffy, Willow, Xander and Giles.
Which character of this book was the easiest to write?
The premise of the book is that a plague has turned 99.9999 percent of men into zombies, and twenty years later, women, who are unaffected, start to date zombies for companionship. The protagonist, Hattie Cross, has actually written a book called The Girls’ Guide to Dating Zombies and excerpts of her book are included. Writing those chapters, which I consider to be a sort of character, were the easiest to write once I figured out that the tone should be a take on women’s magazines. I work at one, so I knew exactly how to mix it up: quizzes, charts, etc. Writing them was a blast.
Which was the most difficult?
Jake Maddox is one of the .00001 percent who are immune to the zombie plague, so he’s a straight-up regular human male. Figuring out how one of the last men on earth would feel, think and behave in a world populated by billions of women was difficult. I had hard time getting at the core of what his experience would be like.
Plotter or panster?
Total panster. I have no idea what’s going to happen. I usually figure out what the plot is about halfway through and then have to go back to the beginning and write it in.

Hattie Cross knows what you’re thinking: Zombie sex? Ewwwww. But she also knows that since a virus turned 99.9999 percent of human males into zombies, it’s statistically impossible to meet–let alone date–the remaining 0.00001 percent. So she writes “The Girls’ Guide to Dating Zombies” to help her fellow single women navigate the zombie-relationship waters.

Her practical how-to impresses the CEO of the largest drug company in the world, and before she knows it, Hattie, a reporter for a downmarket tabloid that specializes in conspiracy theories, is sitting down with the woman who single-handedly invented the zombie-behavioral-modification market. Granted access to the inner sanctum of zombaceuticals, she meets an actual, living, breathing M-A-N.

Now Hattie, the consummate professional, is acting like a single girl at the end of the twentieth century: self-conscious, klutzy and unable to form a coherent sentence without babbling. Worst of all, the human male appears to have impaired her ability to think clearly. Because all of a sudden she’s convinced a conspiracy is afoot at the drug company and it seems to go all the way to the top!

Why Date a Zombie?

IF YOU’VE BOUGHT this book, then you’re either dating a zombie or thinking about dating a zombie. You know that in this postblight world, your chances of getting hijacked by a terrorist, being staked to a bamboo pole in the Heilongjiang Province of Inner Mongolia and having your spleen eaten by a saber-tooth tiger are eight times greater than meeting one of the estimated 344,923 men left on the planet.

You’re a practical young woman who isn’t willing to waste her time on impossible fantasies sold to her by the Hollywood dream machine.

Welcome to the rest of your life.

Naturally, as sensible as you are, part of you can’t help but wonder if dating a zombie is settling. Can’t a woman like you—smart, funny, attractive, kind—do better than an animated clump of rotting flesh that lives only to consume brains?

With 99.9999 percent of the male population transformed into zombies, all that are left are animated clumps of rotting flesh that live only to consume brains.

And that’s why you’re reading The Girls’ Guide to Dating Zombies. This book will help you understand and navigate the challenges and rewards of the zombie-dating lifestyle. You’ll learn how to…

Remember, at the heart of every relationship is companionship, and this is what zombies provide—in spades.

Plus, they love to go shoe shopping (more about that later!).

I’m not saying that zombies are better than men. Perish the thought! But men are gone and now we women have to do what we’ve done since time immemorial: Make the best of what we have.

Trust me, I know. I’ve been having satisfying zombie relationships for over six years and with the help of this book, you will too. Turn the page to get started right now.

WHERE TO BUY IT:

Lynn Messina grew up on Long Island and studied English at Washington University in St. Louis. She has worked at the Museum of Television & Radio (now the Paley Center for Media), TV Guide, In Style, Rolling Stone, Fitness, ForbesLife, Self, Bloomberg Markets and a host of wonderful magazines that have long since disappeared. She mourns the death of print journalism in New York City, where she lives with her husband and sons. She is author of six novels, including the best-selling Fashionistas, which has been translated into 15 languages.