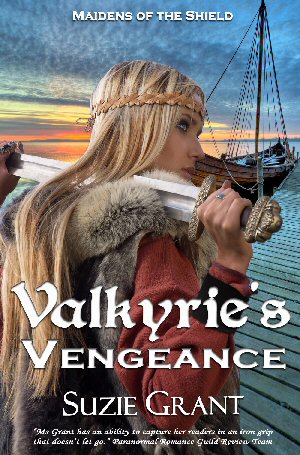 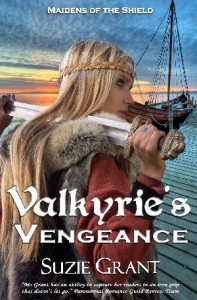 Today I’m very excited to be hosting Suzie Grant.  She has also offered a book for a giveaway!  So please leave a comment to grab the book.

Stranded on foreign soil. Rescued and raised by the enemy. Tyra Svensdottir declares war on her own people after witnessing the death of the very woman who’d saved her life. Kidnapping the man who wields the sword of the underworld — Hel’s Hammer — Tyra forces him to repair her shipwrecked vessel. Her quest to kill the swordsman’s king takes them across frigid waters on a myriad of adventures and a voyage of sensual discovery.

Rorik Thorlicksson uncovers treachery within his clan but in order to return home to warn of the impending attack, he must yield to the woman holding him captive. Along their voyage he unravels the mystery behind his captor. He discovers she is the woman promised to him in wedlock at birth though her disappearance years ago released him from his betrothal. Dissuading the little heathen from her purpose and into his bed becomes a more appealing prospect with every passing day.

Blood vengeance brings them together even as desire binds their hearts. Amongst the secrets and obscurities of their destinies, they find a love that spans a lifetime as well as an end to A Valkyrie’s Vengeance.

She dove for cover inside the grounded longship’s hull. Her heart stalled and then nearly pounded its way outside of her chest. She placed a hand there as if she could stop the horrendous hammering, or at least quiet it somewhat. Eyes wide, she spat the mouthful of salt water out and rose to her knees, making sure to stay hidden. The hull tilted on its side like a great fish dragged from the sea. Leaning against the wooden planks, Tyra summoned the courage not to cry. Who shot at her? How had they found her?

For the last three days, she’d wandered the beach alone. She wasn’t even sure where she was. Her gaze roamed her surroundings. Early morning mist swept the beaches in its wispy grasp and limited visibility. But she could hear voices. She couldn’t locate from whence they came.

Tyra slogged through the calf-high water, leaning low, to the front of the ship. Her fingers shook as she reached out to grasp the edge of the jagged planks where the hull had struck stone, causing the vessel to sink. Waves lapped at her ankles and washed the sand out from under her bare toes as she stepped over one of the bloated, dead bodies. Bile rose in her throat and she tamped it down. The rancid scent of rotting flesh permeated the air around the longship’s belly and her empty stomach protested the smell.

Her lips quivered. From fear? Cold? Both. She only wished to go home. Her father had warned her— when the gods grant our desires we may find we no longer wish for them, Tyra. An ache developed in her chest and she could almost hear the deep timbre of his voice. Why hadn’t she listened to him?

Bodies littered the beach in various positions. Her brother…her cousins…all dead. She’d been the sole survivor. Of the twelve men, only four had washed ashore so far. She covered her mouth, to hold in the scream forming in the back of her throat.

A deep, hearty laugh caused her to stiffen as she waited for further movement. She peered around the edge of the shattered boards and a single arrow thumped into the side of the ship next to her face. She leapt back with a gasp.

The laughter grew louder. They were toying with her now. They must know she was alone. Her legs were weak and wobbly from lack of nourishment and her vision blurred. Voices carried to her and she knew the enemy was closing in.

Tyra could not wait here to be slaughtered like an animal. She must move to a better battlefield. She scanned the area. The beach faded into a dark cluster of trees. If she made it there, she would have a better chance of survival with more places to hide.

But running from here to there…a single arrow would kill her. Tyra choked back her tears.

Taking a deep breath, she burst from the opening and plunged headlong down the stretch of open beach toward the cover of the trees. Her legs pumped furiously and she squealed at the swish of an arrow flying past her.

She gasped for breath and her lungs burned from lack of air. Plink. Plink. Two arrows hit the face of the rocks ahead of her and fell harmlessly to the ground.

Tyra grabbed one as she ran past. A weapon would even the odds somewhat. She might only be twelve-winters-old, but her father had taught her from an early age how to protect herself. He appreciated strength in a woman and had encouraged her to take up arms. A woman’s place was beside the hearth, but a woman also protected the hearth while the men were away.

Steep, craggy rocks settled at the base of an incline. She leapt over a small boulder and burst through the edge of the trees. There was no path here, and she knew not where to go, but she could not falter now.

The sound of the chase followed her as the enemy crashed through the brush behind her. Their harsh breath broke the silence of the forest as the men sucked air into their lungs. Tree limbs slapped against her face and stung her tender skin.

How many were there? Did she dare look? If she fell she would never be able to get away once they caught her. She could not look and risk losing her small advantage.

They laughed and taunted in a foreign tongue, and they were closing in. Lengthening her strides, she dodged a maple tree and leapt over a dead, fallen trunk.

Why had she stowed away on her brother’s ship? Why had she not stayed home where she belonged? Hugh had been headed to Jorvikskyr on a trading expedition, and her father had forbidden her to go. Determined, she had hidden away in an empty trunk. A storm had brewed so suddenly, near falling right atop them, leaving the crew little time to sail safely to land.

And due to her foolish pride she was left running for her life in an unknown land.

The terrain dipped and she slid down an embankment. She sprang forward and raced north. Several seconds later she realized she heard no sound.

Her footsteps slowed. She gasped for breath and leaned a hand against a thick oak, while her other settled against her heart. Dropping to her knees, she hid behind the large trunk, and searched the area. The mist weaved between the carpet of trees, Tyra studied the wall of green for the slightest movement. Nature’s breath seemed to be silenced as she waited for some sound.

Where had they gone? Had they given up the search?

The mist thickened amongst the vegetation and descended into a moist cloud just above her head. Everything beyond her reach faded into a grey haze.

A limb snapped. She shrank back, the bark of the tree scrapping against the soft flesh of her forehead. Hot, silent tears coursed down her cheeks. She’d wished for adventure. And now she wished for home.

Silence hung in the air like the weighty fog. It was there and she felt it. But it was the danger within she feared, not the fog itself.

To have endured the storm stowed away in a trunk and survived the crash—only to die on land at the hands of strangers seemed one of Loki’s cruel jests. 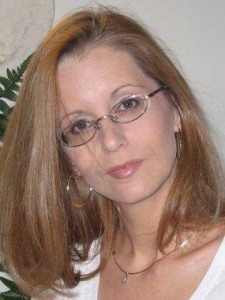 Suzie still believes in happily-ever-after and after growing up reading classic adventure literature like Treasure Isle, Robinson Crusoe, and The Swiss Family Robinson tales, as well as epic novels like Gone with the wind, Suzie would dream up adventures of her own.With her love of history she brings the action of thrillers to historical romance with steamy, love scenes and a pace that will leave you breathless!

She lives happily ever after with her new beau, three boys and one little Shih tzu named Peppy Le’Pew in NC. One day she plans to retire and sail along the east coast an adventurer to the end.