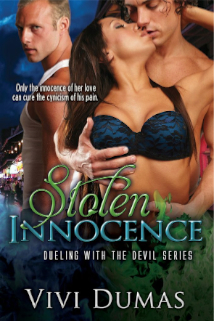 I’m very happy to have Vivi Dumas here today with  book, Stolen Innocence, the third installment of the Dueling with the Devil Series. It will be released October 4, 2013. 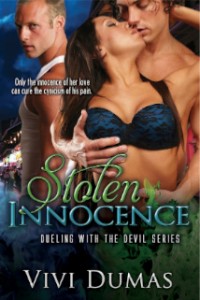 And don’t you just love this cover?

She’s giving away copies of this book, but they won’t be available until mid-September. Check out the rafflecopter below to get your hot little hands on this book before anyone else!

They say ignorance is bliss, but when it comes to love and mating, Charity Lovell wished someone had schooled her on the ins and outs. She fell hard when she saw the beautiful face of the fair-haired demon as he lay broken in Lucifer’s dungeon. Her body ached for him. Her heart cried for him. This had to be her mate, right? Who else could make her trade her soul to the Devil to save someone she didn’t know? Someone should’ve told her love wasn’t quite as straight forward as that.

Damon lived an uncomplicated life, even as the alpha of the Lake Charles pack and the son of Lucifer. He should’ve taken a mate years ago, but held on to the hope of love. Only one female came close to making him believe he still had a chance for happiness. Yet, her heart belonged to someone else. Once again, the feeling is back, stronger than ever. And again, his female has pledged herself to another. Damn demons were ruining his love life. This time Damon plans to fight for what was his and win his rightful mate.

Damballa eyed Lucifer suspiciously as the angel dusted off a boulder and gracefully lowered himself on the hard, burnt-orange surface. “What bring you to the slums of Purgatory?”

“Not many people still think of me as an angel. You’re showing your age, Damballa.” Lucifer’s smile gleamed in bright contrast to his ebony skin.

“You shouldn’t pry in other’s minds without their permission. Does age matter when you’re no longer amongst the living?”

“Again, why are you here?” Damballa demanded.

Lucifer inhaled a deep breath and sighed as he released it. His face displayed an Oscar winning expression of disappointment. “Everyone’s so impatient these days. All that television and those video games. Do you get those down here?”

Crossing his arms across his chest, Damballa stared at Lucifer without a response.

“I guess you want to know why I’m here.” Lucifer laughed at Damballa’s grunt of frustration. “I need your help.”

Damballa narrowed his eyes, tightening his arms in their locked position, closing himself off even more. “How can a lowly human priest banished to Purgatory help the Prince of Hell?”

“When you put it like that, it make me second guess my visit. But then again we both know the greatest Vodou priest who’s ever walked the Earth isn’t exactly a lowly human. Didn’t your followers even deem you a god?”

“You know I was stripped of my title and those followers turned on me with vengeance.”

“Some don’t appreciate those who think outside of the box. I, on the other hand, appreciate innovation, especially when it goes as far to the dark side as you delved.”

Damballa strolled over to the hollowed out cavern wall filled with books, pretending to study its contents. His hand trembled as he removed a book of spells from a shelf. Sorrow lingered in his heart when he thought of his demise. The darkness took everything he loved away from him and landed him in this fiery stone prison. Love was an unstable drug. No one could predict its side effects. For him, they were lethal.

“Regret and self-pity only lead one down the road to condemnation. They’re useless in seeking redemption. I know what you want. And I can get it for you.” Temptation slithered amongst Lucifer’s words.

A chuckle tickled Damballa’s throat. “There is nothing on Earth for me. I’ve glanced at the world a few times and they’ve turned it into a shithole. I’m not looking to go back to a place I no longer recognize.”

Pushing himself off his seat, Lucifer appeared beside Damballa. “You underestimate me. I mean I know what you really long for.”

Damballa faced the Prince. He raised a brow in question. “What is it you think that I want?”

“No. She has ascended,” Damballa spat.

Lucifer barked a laugh. “There’s no ascension for those who trade their soul to the Devil.”

“What do you mean? She made a deal with you?”

“Yep. I helped her people. She was really pissed at what you did. In exchange, I have her soul until I decide what I want to do with it.”

Grabbing Lucifer by the shoulders, Damballa shook the Devil. “You’re lying. She would never…she wouldn’t give herself to you.”

Lucifer shoved Damballa’s hands off his shoulders. “Your little lady was willing to offer herself to the highest bidder. Isn’t that why you killed her in the first place?”

“You’re not crazy. You know I could incinerate you right here. She wanted a life for her family. One not involving running around as wolves for the rest of their lives. A little blood signature on some parchment and we had a deal. I must admit the new E-sign makes brokering deals much easier.” Lucifer cracked a slow grin and chuckled to himself. “Anyway, I have her soul and the world got werewolves. Maybe not a full recovery, but a good compromise. Seemed like a fair trade at the time. Now, I’m offering to return her back to you. Slightly used needless to say, but who cares when it’s the love of your life.” The jagged edges of Lucifer’s teeth showed when he smiled fully.

Damballa’s heart and head raced with anticipation. “And what do I have to do to get her back?”

“I need to manifest on Earth,” Lucifer answered casually as he picked imaginary dirt from under his finger nails.

Damballa choked at Lucifer’s words. “Do you know how much dark magic that requires? I don’t even know if I can harness enough energy to jump start the process. That requires a blood sacrifice.”

“Okay. Let me know what you need and I’ll order it.” With those last words, Lucifer disappeared.

A shiver whispered down Damballa’s spine. No matter what dark magic he practiced in the past or how badly he wanted Ariella back, unleashing Lucifer on Earth was a terrifying thought.

Don’t forget to check out the other books in the series as well. I’ve personally read the first one, and really enjoyed it! 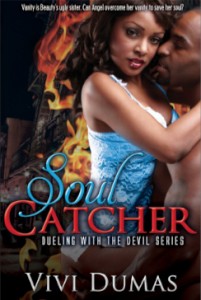 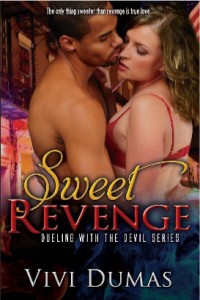 Although Vivi Dumas grew up an Army brat, she calls Louisiana home, but have endured the hot summers and cold 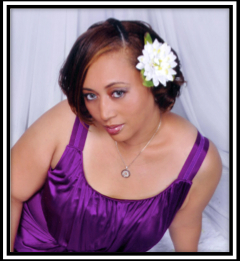 winters of Maryland for the last 16 years. She is a graduate of Mount St. Mary’s University with an MBA in Finance and Marketing. Her analytical side has honed a career in the financial industry for almost twenty years. To balance her logical, numerical day job, she unleashes her creativity in her writing.

TO WIN A COPY OF STOLEN INNOCENCE OR THE WHOLE SERIES, ENTER HERE