Fire in the Blood – Robyn Bachar 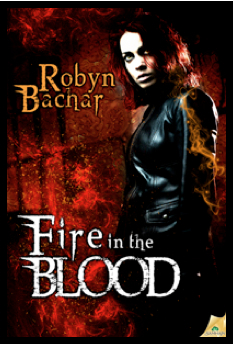 Fire in the Blood

It’s good to be bad…

Patience Roberts is the last summoner standing between magiciankind and certain demon invasion. After banishing two or three demons a day for too long, gods know she’d like nothing better than a little down time with her number one distraction—Faust.

But with vampires, hunters and assassins lined up to take her out, who has the time? Still, she has to admit her resistance to the amorous faerie is wearing thin. Not that she’ll ever let on—after all, faeries are notorious for their short romantic attention spans.

Faust, a Shadowspawn faerie, watched as his outcast clan dwindled to nothing. Determined to hold on to the woman he loves, he’ll do whatever it takes to protect Patience. And one day build a life with her.

When an old demon enemy punches through the barrier between the worlds, Patience must draw on every ounce of her reputation as a cast-iron bitch to temporarily banish him. To get rid of him for good, she’ll have to sacrifice one too many pieces of her soul to leave room for love…

The elevator brought us up to the penthouse—of course, nothing but the best for the associates of Zachary Harrison. He was rich, famous, powerful, handsome and he gave me the creeps. Unlike Faust, he pinged my evil radar, which was why I kept our visits to a minimum even before he put a hit out on me.

I eyed the décor while Faust showed Harvey to the guest room. It was surprisingly bland and conservative for a faerie’s home, because they’re usually into bling and bold colors. The place was bigger than my condo, but I tied up a lot of my money in investments and savings instead of luxury. If I lived long enough to retire, I’d be a millionaire when I did. Judging by the size, I was willing to bet there was more than one guest room in a place this big, but I didn’t call Faust on it. Yet. It would depend on how our conversation went.

I went in search of the kitchen, and more importantly, of a cold beverage. A glass of wine would be nice, but I was just plain thirsty and I’d settle for anything. Food would also be helpful after my trip down the stairs. I opened the cabinets, looking for a water glass, but the shelves were empty. No food, no dishes. The fridge was empty too, but then again my fridge was pretty bare. I collected condiments, soda and expired take-out. Poor Harvey was very tired of me asking him to smell things to see if they’d gone bad.

“Here. Try this,” Faust said from behind me.

I turned and he offered me a plain white coffee mug of pink drink, the faerie version of a medicinal energy drink. It’d cure all my aches, pains, cuts and bruises—hell, it could probably bring me back from the dead.

“I’m not hurt that bad,” I protested.

“You need your strength.” He smiled, and I peered at him warily.

“Why, what do you have planned?”

His grin widened, and I walked away to sit on a stool next to the kitchen island. I sipped the drink and wondered what it tasted like. Delicious, probably. I missed delicious, it was a distant memory. Healing magic tingled from my lips to my toes and back in a prickly wave.

“You have history with this shadow demon?” Faust asked.

“Kris? We go way back, and I’m not his favorite person. Look, I know you’re wound up about Harrison’s hired killer, but this is worse. Kris is an ancient demon. He shouldn’t be able to get through to this world, and now that he’s here, I’m not sure I can send him back. It’s never happened before that I know of. I sure as hell don’t have a spell that’ll banish him.”

Faust tilted his head to the side and stroked his chin as though he had an invisible beard. Did faeries shave? Doubtful. “You need more information. You should speak with a chronicler.”

I smiled dryly over the rim of my mug. “A chronicler’s the reason I’m in trouble with Kris and your buddy Harrison. I’m pretty sure Simon St. Jerome sent the Titania my way to get her ritual, and we got it from Kris. I kicked his ass for it, and it must’ve been the straw that broke the camel’s back.”

“No, you really don’t. If I can banish Kris, and that’s a big if, I’ll have to finish the job in the shadow realm. I can’t let him go this time. He’ll keep coming at me until one of us is dead.”

“Didn’t you say that people try to kill you all the time?”

The corners of my mouth twitched, and I bit back my response. There’s a reason I haven’t killed Kris before now. Fighting him was within my ability, but killing an ancient demon takes a lot more power. I’d have to trade a piece of my soul to do it, and I didn’t have any more to spare. Summoners trade bits and pieces of our souls away for favors and power, like I’d foolishly traded my sense of taste to win over a boy. Every bit of soul lost is a bit of demon gained, hence my yellow eyes. I’d done enough bad things that I was on the verge of tipping from human to demon. An act like killing Kris would finish me, but I couldn’t tell Faust that, so I chose a different truth instead.

“I’m afraid of him. I’ve kicked his ass a dozen times, but I can’t kill him.”

I blinked. “You’re going to slay my demons for me, babe?” I meant it as a joke, but he didn’t laugh.

“Yes,” he replied. It was so simple, so matter-of-fact. My dark knight.

Robyn Bachar was born and raised in Berwyn, Illinois, and loves all things related 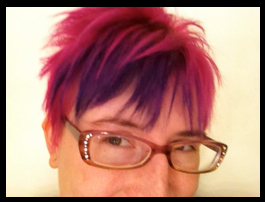 to Chicago, from the Cubs to the pizza. It seemed only natural to combine it with her love of fantasy, and tell stories of witches and vampires in the Chicagoland area. As a gamer, Robyn has spent many hours rolling dice, playing rock-paper-scissors, and slaying creatures in MMPORGs.