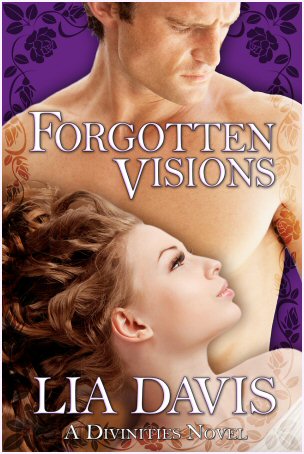 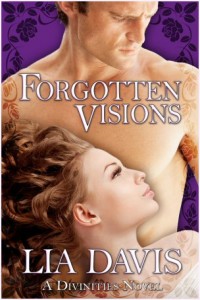 Today I’m happy to have Lia Davis here with her book Forgotten Visions. There is a great prize up for grabs:  $25 gift card to winner’s choice of Amazon, B&N or ARe, signed swag and a goodie pack.

Kalissa Bradenton isn’t your average coffee shop owner. Born to an elite witch bloodline with a rare genetic mutation, she’s a Divinity on a mission. The death of her parents sends her away from her Maxville, Florida, home and into an ancient war between witches and demons. When childhood friend Ayden Daniels comes to her aid after an almost fatal accident, visions of a past she doesn’t remember sparks an old flame and new desires. With the past slowly becoming clearer, she eagerly sets her sights on mending Ayden’s heart and gaining his trust–until a ghost from her past returns to claim her as his demonic mate.

Ayden, the new Sheriff of Maxville and grandson of the oldest living Divinity, is investigating a series of Divinity killings. When he comes face-to-face with the one woman he hopes to have little to no contact with, old pain rises, quickly followed by anger and resentment. Through his rare power of adaptability, he learns actions from the past may not be what they seem. Hope fills his broken heart and determination pushes him to do whatever it takes to win Kalissa’s heart once more before he loses her forever.

Together they must find the strength to mend their tormented souls, while fighting an evil out to destroy the world.

Kalissa glanced curiously at the hand-carved oak container. After placing the books inside an empty box, she took the five-pointed star from her sister. At closer inspection, there was no visible opening. Puzzlement twirled in her mind, quickly replaced with a nosey need to figure the thing out. What was it?     She silently repeated Khloe’s question.

It looked like one of her mother’s trinket boxes at a glance. But it was different. Magical essence coated the wood, making it warm to the touch. The wood felt almost alive, enchanted.

“It could be spelled,” Khloe chimed in.

“In here.” Khloe examined the contents inside the box she was going through. A piece of her pink-streaked blond hair escaped her ponytail and fell in her face. The hair and eyes were the only way to tell them apart. She had teal-colored eyes and cast a glamour spell over her hair so it was a light blond, with pink streaks on either side of her slightly oval face.

Kalissa never cared for glamour spells or bringing any kind of attention to herself. Her very vivid violet eyes did that enough.

“Ah!” Khloe extracted another, larger wooden box and opened it. “There are ritual items in here. Salt, chalk …” She lifted a piece of parchment paper and carefully unfolded it.

“What is it?” Kalissa shifted closer.

“Instructions,” Khloe stated in a matter-of-fact tone. Kalissa rolled her eyes as her sister read through the directions.

“Set the star in a circle. Touch each point and recite the corresponding element counterclockwise starting with south.”

Khloe laughed out loud, a musical sound that made Kalissa smile in return. Picking up the glass jar of salt, Khloe made a perfect circle on the hardwood floor big enough for the star-shaped box. She took the box from Kalissa and set it inside the circle. Slowly, she touched the left bottom star point. “Fire.” She moved to the point to the right. “Air.” She continued round, speaking the remaining elements at each point: Earth, Spirit, and Water.

Lia Davis is a mother to two young adults and two very special, equally different kitty cats. She’s a wife to her soul mate, who drives her crazy during editing/revisions. She and her family live in Northeast Florida battling hurricanes and very humid summers. But it’s her home and she loves it!

An accounting major, Lia has always been a dreamer with a very activity imagination. The wheels in her head never stop. She only recently got serious about publishing her work and loves it more than she imagined. Writing a stress reliever that allows her to go off in her corner of the house and enter into another world that she created, leaving the day job where it belongs.

Her favorite things are spending time with family, traveling, reading, writing, chocolate, coffee, nature and hanging out with her kitties.