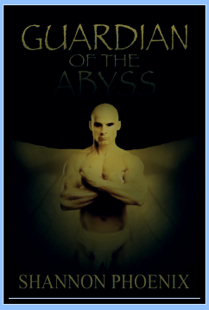 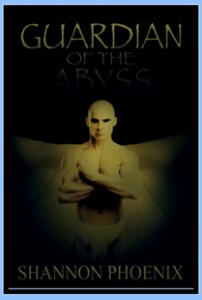 I’m happy to have Shannon Phoenix and her book Guardian of the Abyss. She will be giving away one ebook, so please leave a comment.

Guardian of the Abyss
Supernatural Singles

Buried at sea by the sorcerers who created him, Abaddon is unable to heal himself and unable to replenish his energy. He has lived here for longer than he can remember, with no hope of escape. Time is against him as the sea eats away at him, body and soul.

When her diving partner tries to kill her to take over her company, Sarah finds herself trapped beneath the waves and dying. Having brought light to Abaddon’s dark existence at last, only she can grant him the courage to do what must be done to escape his watery prison.

Abaddon must sacrifice his wings to save her. Sarah must come to terms with being trapped with someone she has been raised to believe is a demon, and face the betrayal that nearly destroyed her and the company she built. Together, they must take on the ocean and their own fears. The consequence of failure is death.

Abaddon had lived in this ocean hell for so long now that he didn’t even know how long it had been. Unable to connect to the wind or the Earth due to the water around him, he had been forced to attempt to revive what energy he could from the distant sun. Water was his enemy, and he had never known it more than now.

Most of the ‘guests’ he got here were men or women whose intentions were vile. Their nefarious purposes broadcasted so strongly that even the wildlife here felt it and hid. Abaddon hadn’t known of their explosive devices for very long, but he’d found out by means of a curious–and now dead–shark. He had never touched their strange packages, and knew nothing of what they contained.

But today, he had stepped out of his underground lair in order to attempt some time in the sun. He needed replenishment, and in these depths, watery sunlight was all he could get. Unfortunately, it came at a cost as the water continued to etch away at his stone form. He had no idea what would happen, but without sufficient power, he couldn’t renew it. Would he die? Never return from stone form? He didn’t know… didn’t care to find out. So his forays out were few and far between.

As he sat there in stone form, he had seen the human man detonate the bomb, and felt his ill will. The water had filled with blood and then Abaddon had seen the woman and the terror on her face. She wore none of the strange apparatus the others always wore, and Abaddon wondered how she survived so long under the water. Yet he also realized that her death would happen any second now. He looked up after the retreating man. He could jump and catch him. Then he could climb the rope and be free of this prison at last.

Or he could save the woman. He felt her shining soul and he could do nothing but gather her close and make haste towards his cavern. He refused to look at the retreating chain that held her companion. He couldn’t bear it, and he might change his mind. He already regretted it. It was likely that she would die anyway, and he had thrown away the first opportunity he had ever had to escape. The others had never lowered a chain. They swam down with their bodies covered in strange machines, and swam away again.

It was almost more than he could bear to let it go, but now the decision was made and with each passing second, it went beyond the reach of his highest underwater jump. He pushed into the cavern and leaped from the water in a single jump. His powerful legs took him up onto the ledge that made up his prison.

Had he never found this underwater chamber filled with air, his stone form would have been taken over by the ocean long ago. As it was, he was able to escape the water’s constant torment for great periods of time.

He laid her down carefully, concerned about her health and well-being. She looked fragile, laying there alone in the slight gloom from the lichen that coated the walls. He had no memory of how to care for her. It had been so long since he’d been around humans–anyone at all, for that matter–that he had no idea what to do.

A moment passed and she suddenly convulsed. Abaddon decided that was most likely a bad thing. He turned her onto her side and watched as water and something else spewed from her mouth, filling the chamber with a vile odor. Disgusted, he cupped water from the ocean and let it carry the vile substance back with it. After a couple of minutes, she lay still and quiet except for the strange, regular sound of air going in and out of her. That, he felt sure, was a good thing.

He wondered what he would do when she awoke. Maybe he would just sit in his stone form, and she’d go away. She couldn’t stay here, humans were fragile. She had gotten down there without the strange objects the humans kept on their faces, so she would leave his cave and go back the same way.

Satisfied by this certainty, he moved a few feet away and squatted down to watch her taking in and releasing air. It was odd that humans, even while rejuvenating, could not be still. Fascinating, as well… and lovely. No doubt he only thought so because he hadn’t seen a woman in… how long had it been? Well, a long time, anyway.

The usual silence of his cavern was broken by the woman’s sounds, and Abaddon found it difficult to focus. Perhaps he should go outside and attempt to utilize the remaining hours of daylight. It was a wise choice. Not doing so was likely unwise in the extreme.

But Abaddon sat and stared at the constantly moving form of the woman. If there was one thing he could admit, it was that at least he hadn’t forgotten what a woman was. Nor, in all those long years, had he forgotten what it felt like to be betrayed by one. He’d be rid of this one as quickly as possible. Until then, he wasn’t above enjoying looking at her. She was beautiful, and that was a fact. He’d remember her for a long time after she was gone.

The thought made his heart pinch. He didn’t want her to be gone. Except he did, because her being here was just plain dangerous on every level, for both of them. Not that she was his problem. She wasn’t his problem. But if she was, he’d want her back to her own world quickly, for her own good. Humans had needs, as he recalled. A rather excessive lot of needs, at that. He had absolutely no way of caring for a pet, aside from the shark he sometimes fed. Other than Geoff the shark, he didn’t need anything, unless it could get him out of his personal hell.

And that, he decided, was that.

For the purpose of this blog post, Abaddon has agreed to answer a few questions. I hope that you enjoy them, as I found his answers fascinating.

Shannon: Hello, Abaddon. Thank you for joining me today for this interview.

Abaddon: Thank you for having me, Shannon.

Shannon: The first question that we have for you is, what did you do before you were a gargoyle? I understand you were the original living gargoyle; made, not born?

Abaddon: That’s correct. I was created in what you might call a state-of-the-art laboratory at the time. The men who changed me from human to gargoyle were sorcerers. Most people nowdays call them alchemists and claim that they aren’t what legends say they were. That’s the way we all want it, of course. Discovery lies on the other side of people realizing that legends are just distorted truths.

When they discovered me, I was an untrained sorcerer. I was working as a blacksmith. I shaped metals into tools of all kinds. Mostly horseshoes and wagon parts. It was hard work, but it was honest work that paid very well. I also enjoy creating sculptures from the poorer quality metals that wouldn’t have made good utensils. There was little time for it, but the sculptures were quite sought after when I did get to make some.

Shannon:  Can you tell us more about your experiences right after you were captured after Mayra died?

Abaddon:  Some may not be appropriate, so I will stick with the lighter telling. I was taken by the Rakshasa to a dungeon, where they kept me for some months. I believe they were in negotiations with the sorcerers. It was during this time that they discovered my weaknesses, and tortured other prisoners if I attempted escape. It’s very difficult to restrain a gargoyle.

It was during this time that I learned that I could still form metals, using my hands and my natural affinity for sorcery. Sadly, it was a mostly useless skill, since all it netted me was releasing myself from my bonds only to run up against the threat of others being tortured.

Shannon: I’m sorry. It sounds like you had a very difficult time of it. So how many sons do you have? I understand that you had a great number of offspring before you left captivity at the hands of your creators?

Abaddon: I had 57 sons. Of those, only 12 remained alive when I finally escaped the sea.

Shannon: Where were you trapped at?

Abaddon: I didn’t know at the time. It’s interesting to note that I walked a very long distance before becoming trapped. I ended up off of the coast of Bimini, on a shelf low in the gulf stream’s channel. I still chide Sarah to this day for diving there.

Shannon: And how does that work out for you?

Abaddon (sounding a bit sheepish): I sleep on the roof.

Shannon: I suppose the doghouse is too small for you.

Abaddon: I guess it depends on who you ask. She says that if I keep harassing her about diving there, she’s going to have a big enough one built, just on principle.

Shannon: You’ve just disappointed all women who had hoped that gargoyles might not spend their time in the doghouse like human men do, you know.

Abaddon: Sarah will be so proud…

Shannon: Well, Abaddon, thank you for joining me for this little chat. I enjoyed it and I hope to chat with you another time and ask you more questions, but for now, our time is up.

Abaddon: All the best to you and your readers, Shannon

Shannon Phoenix always wrote stories. She watched the characters take on their lives within her mind, and began to write down what they were doing. She would write the stories and then let them go. But a few years ago, she got caught writing those stories. You know… those stories.

To her surprise, the person who found her stories loved her characters as much as Shannon did. She tentatively allowed others to read the stories, as well, and it was from that first foray into the scary world of letting others read her ‘little tales’ that Shannon Phoenix Books was born.

Shannon lives in New Hampshire with her husband John, her daughter, and their family cat, Song. Her full time job is parenting, her part time job is as a mother’s helper to a family friend, and her passion is letting the characters in her mind out on paper–or keyboard, as the case may be.

Welcome to Shannon Phoenix Books. May you find the magic in your own life.