Thank you for stopping by.  I’m giving away an ebook copy of each of the books in the Six Savior Series for the Easter Bunny to put in your basket.  See the blurb below each picture, and you can click on the picture itself to read an excerpt.

***Please note:  Even though these are part of a series (The Light Within Me is #1, Finding My Faith is #2) these are stand alone titles.  You don’t have to read them in order.*** 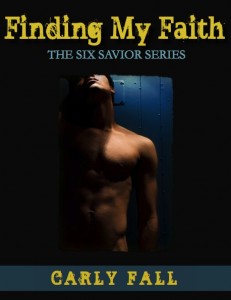 Growing up in a small Northern Arizona town, Faith Cloudfoot’s life was spent playing in the forests surrounding her house under the protective eyes of her father, and learning about the legends of her Native American heritage. Yearning for more out of her life, she moves to Phoenix, Arizona at the age of twenty-three where she is kidnapped and almost killed.
Rayner has a special ability, one that weighs on him like a curse. He can see spirits trapped in between life and their final resting place. Because he can’t do much to help them, he studiously ignores them. He concentrates, instead, on working with his fellow warriors to right the wrongs caused by the evil criminals from his home planet.
When Rayner sees Faith in her spirit form while investigating a lead in Phoenix, his attraction to her is immediate, yet he follows his own personal code and ignores her cry for attention. When he realizes that she may be a stepping stone to getting him home to his own universe, he engages Faith and begins to use her as a means to an end: going home.
As the attraction grows stronger, Rayner finds himself breaking all sorts of self-set rules, as well as the code of ethics set by him and his fellow warriors. When Faith nears death, Rayner realizes that he must do everything in his power to save her, because if he doesn’t, he may just lose himself.

Know which one you want?