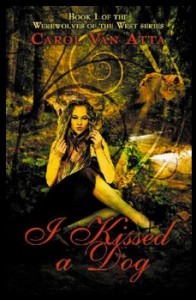 Today I’m happy to be featuring Carol Van Atta and her book, I Kissed a Dog.She’s giving away 3 ecopies and 1 print copy of I Kissed a Dog (US Shipping Only)

I Kissed a Dog

The Werewolves of the West Series Book One

Publisher: Cambridge Press US under the umbrella of Charles River Press (CRP)

Chloe Carpenter isn’t like other women. She can communicate with animals. A gift she unwrapped following one of her frequent dances with death.

In her otherwise wacky life, she’s finally found a semblance of sanity working at the Plum Beach Wildlife Park, where her unique talents can make life or death differences for the animals in her care. That semblance is shattered when a new veterinarian roars into the park in his spiffed up sports car and sets his golden gaze on her. If she had her way, he’d roar right back out.

Problem: He’s her new coworker and he’s saved her life twice – in the past twenty-four hours.

Zane Marshall, Enforcer for the Pacific Pack of purebred werewolves, has a job to do – figure out who or what is mutilating the young men of Plum Beach.

With orders to find the woman who talks to animals, he accepts a position working alongside the fiery Chloe Carpenter, a female who ignites his interest far more than he ever expected. Remarkably, she’s the one elusive female with potential to bring meaning and passion to his empty existence.

Problem: She despises him.

Together, they’re forced to unravel a mystery of supernatural proportions, a murderous mystery with eternal implications for everyone. In the process, they discover opposites really do attract.

Major Problem: Zane is pledged to another woman, and she’ll do anything to keep him from Chloe.

The lion paced to the left, top lip curled back, revealing his pointed teeth; he snarled at me for good measure.

Wary, I watched as his tail whipped from side to side, and he shifted into a crouching position, his eyes never once straying from mine. He was perched above me on the rocky ledge where he spent hours lounging in the sun.

Planting my fists on my hips, I stood taller, squaring my shoulders, and glared up at Butch, a regal three-year-old lion I’d known since I first started working for Luke Snider at the Plum Beach Wildlife Park, over two years ago. Never had I experienced the wrath of this particular animal, and I wasn’t enjoying being on the receiving end of the young cat’s fury.

Fred, one of the park’s volunteers, had gotten the absurd notion that lions were just bigger versions of their housecat cousins, and based on the faulty information, decided to enter the cage for a feel of their fur.

The two females were eating and ignored the intruder. Butch, always curious and fiercely territorial, wasn’t quite as welcoming. He’d cornered Fred and was preparing to paw at him when I’d noticed his dilemma. Counting on my positive relationship with Butch, I’d helped Fred escape and was turning to leave.

Butch had other ideas and decided to get frisky with me. Something I hadn’t anticipated.

Now I was stuck and angry. How dare Butch treat me like a prospective snack?

I could hear Luke, off to my right, warning me to exit the cage — now, but I refused to surrender to my growling challenger. This was one battle I didn’t intend to lose.

It appeared Butch felt the same.

My pride alone wasn’t holding me back; I wasn’t one hundred percent convinced I could escape unharmed and wasn’t ready to risk it.

A considerable, mid-afternoon crowd swarmed the lions’ enclosure eager for some action. As if the town’s recent murders weren’t enough. Granted, most of the park’s patrons were tourists with their cell phones raised in hopes of capturing footage worth posting online later.

If I had any say, it wouldn’t be me dangling from the jaws of my former feline friend. Some vacation memory that would be for the kids watching.

Butch roared, sending a wave of nerve-induced nausea crashing through my midsection. His hindquarters quivered in preparation for the sure-to-come pounce. If I was going to divert a catastrophe, and my funeral, I had to act now.

Backing away, I used my coma-acquired communication skills, and sent what I hoped was a soothing mantra into the lion’s mind: You’re okay. It’s me, Chloe. Calm down. Relax. I have treats for you. Relax. Good boy. That’s it. Relax.

Butch cocked his head, responding to my calming thoughts. He looked, for a brief moment, more like a dog with a mane than a menacing lion. I sensed him relaxing, his rage receding, but before I could release the lung-tormenting breath I’d been holding, a child screamed loud enough to crack glass, inspiring several more children to add their piercing shrieks to his, creating a chaotic chorus.

The lion, startled by the commotion, roared a final warning and sprang, arcing toward me; front paws, lined with stabbing claws, extended my direction.

To avoid direct impact, I dove to the ground, bundling myself into a ball, making sure to cover any vital organs and the soft flesh of my neck.

With my head tucked to my knees, I shielded the back of my head with my arms, and waited.

Like most authors, Carol Van Atta is no stranger to the written word. She penned a short novel at age 12 (somewhat frightening illustrations included, and lots of bunnies were involved), and had a creative writing piece published in her high school newspaper (about David Bowie’s Diamond Dogs LP). Yes, she’s an ex-80’s chick. 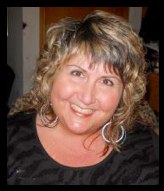 more reading material, and could almost always be found with her nose in a book.

She has contributed to several popular inspirational anthologies and devotional books, and lives in the rainy wetland of Oregon with a terrifying teen (another in college) and a small zoo of animals. She is taking an undetermined hiatus away from inspirational writing to delve into her darker side. (Though you can check out her latest spiritual suspense novel, Soul Defenders). It is rumored that this genre-jumping occurred after Carol discovered too suspicious red marks on her neck, and experienced an unquenchable urge to howl at the moon.