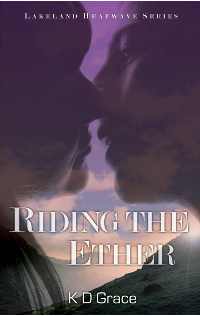 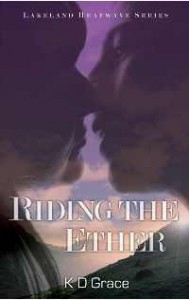 Cassandra Larkin keeps her ravenous and dangerous sexual appetite secret until she seduces Anderson in the mysterious void of the Ether.  Anderson is the sexy, insatiable ghost who can give her exactly what she needs.

But sex is dangerous in a place like the Ether…

When the treacherous demon, Deacon, discovers the truth about the origin of Cassandra’s powerful lust, he plots to use her sex magic for revenge on Tara Stone and the Elemental Coven, who practice their own brand of sex magic.

Cassandra must embrace the lust and sexuality she fears and learn to use its power. Will she stand with Anderson, Tara, and the Elemental Coven against Deacon’s wrath or suffer the loss of friendship, magic and love?

KD: Riding the Ether is book two of my Lakeland Heatwave paranormal erotic romance trilogy. The story is set in the English Lake District, the perfect place for witches, ghosts and magic. It’s the story of a powerful coven of witches fighting an on-going battle with a demon who is hell-bent on revenge against the Elemental Coven and its high priestess, Tara Stone. The Elemental Coven practices a rare form of sex magic that allows them to give temporary bodies to ghosts so they can enjoy the pleasures of the flesh, and it’s the sexual bond they share that makes all the magic they do so powerful.

KD: They don’t talk to me. It’s more like I’m the fly on the wall in the room with them, watching and listening. Either that or I’m inside their heads, like I am them, but I’ve never had a conversation with any of my characters … yetJ

KD: I love the Lake District, and I could always imagine romantic stories with magical twists set in those lovely high places. My husband and I do a lot of walking there, and we especially love to walk the high fells. The views are incredible … until the mist comes down, then the place can turn quite dangerous. The inspiration for the Lakeland Trilogy, and for Riding the Ether in particular, was my one and only experience of being caught up on the high fells when the mist descended and having to feel the way off with a map and compass. It a matter of minutes we went from exquisite views to not being able to see our hands in front of our faces. It was as though we were suddenly somewhere else, somewhere really alien and frightening. That sense of emptiness, of otherness, inspired the opening scenes of book one of the Trilogy, Body Temperature and Rising, but even more it inspired my version of the Ether, that magical void where dangerous magic takes place.

KD: I think it’s flaws that make a good romantic hero. I find heroes that are larger-than-life-perfect to be really boring. I want to see my heroes angst, I want to see them suffer, I want to see them ‘rescued’ by the heroine’s love as much as I want them to rescue. Yes, they have to be strong and rise to the occasion, but everyone is a complex mix of hero and coward and everything in between, why should a hero in a novel be any different? And I love novels that allow us into the hero’s head. I like a view to the angst. I like a hero who has to prove himself worthy of the heroine.

KD: The heroine, Cassandra Larkin, surprisingly. I thought she’d be more difficult because I’d never written a succubus before, and I didn’t really want her to be a succubus in the beginning, but she really left me no choice, and wow! What a succubus! She was easy to write because all I had to do was tap into my own self-doubt – something all writers have in abundance, and let it rip. She surprised me at every turn, as she revealed herself to me, and it was like a veil dance, watching her unfold.

KD: Surprisingly, it was Anderson who was hardest to write. Anderson is a main character in all three books. He is the high priest of the coven, second in command only to Tara Stone, but he’s a 150 year old ghost. Much of Riding the Ether is told from his point of view, meaning I had the challenge of thinking like a 150 year old ghost, who has seen so much, but who is a romantic at heart and speaks very much like a man outside time. He was great fun to write, but way more challenging when nearly half the book is from his point of view.

If a plotter, how long does it take you to plot out a book?

KD: I’m a bit of both, plotter and panster. My plotting involves a long walk during which I scheme a very rough, very lose chapter by chapter synopsis and an even rougher blurb. When I get home, I write it all down. It usually takes me three to four hours of walking and an afternoon of getting down the rough chapter by chapter synopsis, which serves as a very sketchy road-map from point A to point Z, with lots of leeway in the middle for detours and scenic routes. When that’s done, I start the novel.

KD: Write lots, write often, and keep writing! Don’t give up, you’ll get there!

KD: Definitely vanilla because I’m a purist, and because vanilla is often the base of everything else. Yum! Give me a vanilla crème filling any day!

KD: Day. It’s a body thing. When it gets dark, my body wants to sleep. I can pull the night owl routine for a couple of nights, but then I get so grouchy that my husband runs away screaming. As much as I wish I could be a little more of a night person, I’m up with the sun.

KD: Spring. I love all the new beginnings. I love the longer days and I love waking up to the Dawn Chorus of birdsong. Plus it’s the beginning of veg gardening season, and the possibilities are always endless.

K D Grace believes Freud was right. In the end, it really IS all about sex, well sex and love. And nobody’s happier about that than she, cuz otherwise, what would she write about?

When she’s not writing, K D is veg gardening or walking. She walks her stories, and she’s serious about it. She and her husband recently walked the Coast to Coast route across England. For her, inspiration is directly proportionate to how quickly she wears out a pair of walking boots.