KINDRED OF THE FALLEN Kindred Chronicles Book One Isis Rushdan 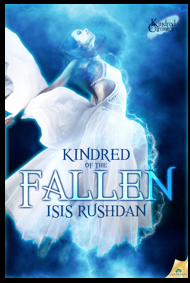 I’m very happy to welcome Isis Rushdan today with her book Kindred of the Fallen. We’re going to find out about the book, and then she is going to tell about the challenges of writing about soul mates. She has a $75 gift card up for grabs and a signed cover flat up for grabs.

KINDRED OF THE FALLEN

Serenity’s soul-reading ability lets her easily create custom tattoos. Everything else in her life is a struggle, from trying to make it work with her best friend, Evan, to nightmares and visions that make her question her sanity.

Then she meets a man who sharpens her craving for something more.

Cyrus has been preparing to claim her as his Blessed mate—the other half of a split soul that, once reunited, is his only chance to break the curse that plagues his people.

One moment, armed militants are firing questions Serenity cannot answer. The next, she is safe in Cyrus’s arms…and learning she isn’t even human. She is Kindred, blessed with preternatural powers, cursed to suffer the twin horrors of the blood rage and the dark veil.

Their union is the greatest hope for redemption in a thousand years, but not all Kindred want to be saved. A dark secret could snuff out their lives before love has a chance to unite them…and redeem the Kindred for all time.

Greater the love…sweeter the pleasure…higher the price that must be paid.

Cyrus stroked Serenity’s arm, his heart tight as a fist and throbbing. His pool of energy gushed and swelled inside of him. Exhilarating jolts, unlike anything he’d ever felt, set his skin aflame. His nerve endings tingled like bare wires.

He’d  watched  her  for the  last  ten  days from a  distance,  waiting  for  the perfect opportunity to meet her. After his reckless disaster earlier in her office, he needed this to go the way he’d planned. For more than two hundred years, he had imagined this, when he’d finally meet his kabashem, the other half of his soul. If he ever found her, his mission was clear.

Claim her at any cost and put an end to the curse.

“My house outside the city offers a spectacular view. It’s the perfect place to appreciate the stars. And I promise you’ll enjoy a meal you’ll never forget.”

Was he being too forward? His impulsive, less aggressive tactic at her studio had backfired.

Sweat slicked his palms and his pulse raced. Ten days should have been long enough to prepare. What was wrong with him? He’d never been nervous going into battle, not even the first time he held a sword ready to kill. But having her within reach threw him off kilter worse than taking a fist to the head.

“I can’t have dinner with you,” she said in a solemn voice that wavered.

“We both have to eat. Why not do it together?”

She raised her left hand with the ring facing him. “I’m engaged.”

Her eyes grew wide for a moment.

“You’re used to getting what you want, aren’t you?” Her gaze slipped from his face. “Women probably throw themselves at you all the time, tossing away their morals along with their panties, eager to get into your bed. I hate to disappoint you twice in one day, but I’m not that type of woman.”

He sucked in a breath, smooth and slow. “You’re right, I am used to getting what I want, but you’re wrong about the women. Casual sex is for the undisciplined, and none of the pursuits in my life are casual.” He leaned closer. “I didn’t mean to offend you with my invitation. I admire your moral compass. Means you’ll never get lost.”

She rolled her eyes and snickered.

Time for uncensored honesty. “Forgive my forwardness, but I sensed a connection between us and thought you had as well.”

She met his gaze.

“The kind of connection one can’t deny or ignore,” he continued. “The kind that  happens  once  in  a  lifetime.  The  kind  for  which  rules  are  meant  to  be broken.”

Thank you so much, Carly, for having me on your blog today. I’m thrilled to be here to discuss the upcoming release of my debut paranormal romance, Kindred of the Fallen, and the challenge of writing about soul mates.

In Kindred of the Fallen, Serenity and Cyrus are kabashem or halves of one soul spilt into two different bodies.  As literal soul mates, I couldn’t make it too easy for them. I had to be mean to characters I love, which is tough for any author.

Luckily, the story had all the inherent obstacles needed. When characters come to life with rich, complicated backstories, problems naturally arise.

A Sticky Past – Instead of a heroine with no attachments or a disposable life, Serenity has a sticky past. Her tragic childhood drives her to create a safe life with someone she can trust, her best friend who is the only family she has. When Cyrus enters the picture like a bolt of lightning, she has to decide if she’ll dismantle one life with a wrecking ball in order to have a different one. Unfortunately (or fortunately to keep the reader turning the page), Cyrus doesn’t make the choice simple by giving Serenity plenty of reasons to doubt his true intentions and to fear the precarious world of Kindred.

For Cyrus, he made a grave mistake years ago, selfishly putting his personal desires ahead of duty. He’s spent the last two hundred years trying to erase the shame by serving his House. He is dedicated to breaking the curse wiping out Kindred if ever given the chance. Even though Serenity isn’t human, she has a human mindset and wants absolutely nothing to do with redemption or what it entails. Suddenly, Cyrus is faced with the agonizing choice of following his heart or performing his duty.

Love must come at a price – A sense of security is of the utmost importance to Serenity.  Her union with Cyrus is the greatest hope in a thousand years, but some will do anything to prevent the curse from being broken since it would mean the loss of Kindred’s preternatural powers in exchange for redemption. Not only will she have to break the heart of her best friend and abandon a thriving business to be with her soul mate, but she’ll be hunted by the battle-guard of a major House until they kill her.

Finding his mate invites a new danger Cyrus didn’t anticipate.  Although Serenity is the one who has to make difficult sacrifices, he could end up losing more than he ever imagined.

Writing about soul mates in a fresh and interesting way was a fun challenge. I hope readers enjoy the journey.

Isis Rushdan was born and raised in New York City. She has a B.A. in psychology from The Ohio State University. Wanderlust has taken her across the globe and

has kept her moving every three years. Fortunately, she is blessed with a husband who shares her passion for travel, movies and fantastic food. Prior to following her bliss as a writer, she had a bright career as an intelligence officer in the U.S. Air Force. She currently resides in sunny Florida, where she hopes to finally  establish  roots,  with  her  husband,  son  and  canine  kiddies.