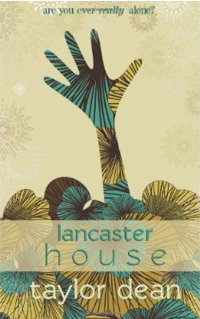 Seriously, this book was just flat out awesome. You can read a little bit about it, but then hurry down and leave a comment because I’m picking the winner on December 4th. 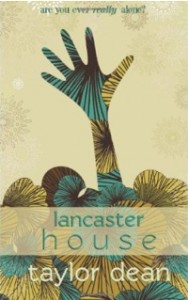 Are you ever really alone?

Zoe Grayson needs a change. So, she moves to another state, purchases an old, dilapidated 1920s Victorian Mansion, and sets out to restore it to its former glory. As she begins the restoration, she finds herself falling in love with the old house…not to mention its illustrious builder, Mr. Lancaster. Zoe becomes obsessed with the house as she discovers its secrets; hidden rooms, secret passageways…and a mysterious man who seems to think the house is his. Who is he? More importantly, how does he live in her home unseen and unheard?

The unexpected answers leave her reeling—and questioning everything she’s ever known. To her dismay, Zoe’s actions land her in the local psychiatric hospital, scheming for ways to return to Lancaster House . . . and the love of her life.

The next day, Wade read over Doctor Abernathy’s notes one more time. The girl he described was nothing like the one he’d met with yesterday.

He was making progress. She was wary of him, naturally. She was obviously biding her time, waiting for her chance to prove herself ‘normal.’ She was far more intelligent than they had originally given her credit for. Her sudden cooperation made him uneasy, even though it was exactly what he’d wanted to achieve.

Zoe walked in then, her head held high. Her blond hair was neatly combed today, her bangs framing her heart shaped face. A hint of crimson stained her cheeks, evidence she was coming back to life before his eyes. Her suicide attempt had left her hospitalized for over two weeks, hanging between life and death. Her recovery was considered a miracle. She wore a fresh pair of pajamas. The standard uniform was a white t-shirt and white pajama pants and she looked clean and fresh in them. The small logo that represented their facility—a crescent moon combined with a cloud—sat on the upper right hand side of her shirt along with the name, Serenity Hills.

“I’m perfectly fine with not a care in the world,” she answered sardonically.

Wade smiled at her in spite of himself. Maybe it was a stupid question. Perhaps he’d dispense with the ‘how are you’ from now on. Her eyes wandered around his office as if taking it all in for the first time. Her next words were said with a frown on her face. “This office is awful.”

“Your office . . . it’s downright sterile in here, cold even. You need to hire an interior designer, warm the place up a bit. You’ll have better results with your patients.”

“Is that a fact?” Wade smiled at her insight, even while admitting to himself she was right. The room had white tile floors, white walls, fluorescent lighting, white plastic blinds on the windows and no pictures on the walls other than his medical certificates. His desk was metal and the drawers creaked. It was a cold office. Zoe sat stiff-backed in a hard plastic chair. “Are you always this blunt?”

Zoe blushed. “Sorry. It’s an obsession. I mentally decorate every room I’m in, to the point of distraction.”

“Perhaps you can give me some pointers.”

“I’d start with painting the walls, a deep, rich color. Then I’d add some throw rugs, and then curtains that add color, but let the sun in. You need a couch, something classy, but comfortable, with lots of pillows. Replace that hideous desk with something mahogany. Then maybe some lamps for softer lighting . . .” Zoe trailed off. “You weren’t serious, were you?”

“Not really, but now that you mention it, it sounds good.”

Wade got down to business. “Where do you want to start?” he asked, wondering if she’d assume he was asking her about decorating projects.

She knew exactly what he was talking about and it had nothing to do with design. “What would you say if I told you there is no such thing as ghosts?” He wanted to get a rise out of her again today. Her answer would be telling. Had she seen the error of her ways all on her own? Had she realized the extent of her delusions?

“You don’t beat around the bush, do you?” Her hands gripped the arms of the chair until her knuckles turned white.

“What would you say if I told you they do exist?”

His hopes for an astounding recovery plummeted. “I would have to disagree.”

“Then we have nothing more to talk about, do we?”

Zoe’s demeanor changed and her eyes stared into the distance, as if she was lost in thought. “It’s real—it’s all real,” she whispered, her eyes haunted.

“Tell me, Zoe. Start with the purchase of Lancaster House.” Several minutes ticked by and he began to think she wouldn’t answer, but then, in a timid voice, her story began to spill forth.

“It’s a stunning house, everything I’d ever dreamed of owning . . .”

The inspiration of this story??

Lancaster House is not a book I’d planned to write. I never intended to venture into the world of Paranormal Romance. However, it’s the favorite genre of one of my daughters. She called me one day and issued me a challenge. She said, “Let’s both write a short paranormal story and see what comes of them.” I told her I didn’t want to write anything paranormal, my mind just doesn’t go there. But by the time we hung up I had promised to think about a plot.

About this time I was utterly addicted to American Idol and Adam Lambert! I was mesmerized by Adam’s performance of Mad World on a fog shrouded stage while wearing vampire-like garb. This image spurred my imagination and started me on my way to writing Lancaster House. That was all it took!

To my surprise, I really got into it. I grew up going to the Winchester Mystery House in San Jose, California, and the place sparked countless stories in my mind. Also, as a child I spent a lot of time at the Hayes Mansion, in fact, my parents were at one time considering becoming the caretakers long before it was restored. Lancaster House contains many things I remember from exploring the nooks and crannies in these houses. I also couldn’t resist adding a little family history into my story, i.e.: my grandfather drove across the country as a young boy of sixteen, saying it was the best thing he ever did. (Andre does the same thing!)

Of course, in the end, Lancaster House far surpassed a short story and quickly became a novel. I have my daughter to thank for it.

The first thing about this book is that it needs a new cover. The cover as it stands now (with the hand) simply doesn’t do this book justice.

Zoe is a 25 year old who has had a rough few months. I felt her pain, and can’t image two major life-altering events such as the ones she went through at that

age. She’s an interior designer that has come into some money, and when she finds the Lancaster House with its oddities and the need for some TLC, she is sold.

Andre is the original builder and owner of Lancaster House, which makes him the resident “ghost.” As Zoe starts to rehab the house, he can’t help but join her, and needless to say, this freaks her out. Eventually, they meet and the attraction is immediate.

I loved the way this story was told, which was from Zoe’s perspective as she talks to her psychiatrist. She’s intelligent and well-spoken, but sometimes her defiance came across as a little childish to me, but it was easy to forgive her for it because I’d act a little childish as well in her position.

Andre…I was immediately in love with Andre…like I couldn’t put the book down in love with him… and my only regret was that we never got a true glimpse into his head. And when it was revealed what he was, it felt a little like a “jump the shark” moment, yet as the story came together, I became more accepting of it, and understood why the author did it. But honestly, the story would have been wonderful without that detail being added.

There were a few things I didn’t understand about the book, but I can’t go into it without revealing spoilers, and obviously they didn’t bother me enough to lower my rating of the book.

This book is well written, and the author was descriptive enough to make me feel like I really, really want to visit Lancaster House for…real. Unlike other reviews I read of this book, I absolutely LOVED LOVED LOVED the ending. Maybe one more scene could have been added, but I closed my Kindle with a big smile on my face and felt like the story was finished. And that I wanted to read it again.

There are very few books I read anymore that stay with me, but Lancaster House did. I absolutely adored this book, the writing, and the characters. I am looking forward to reading the sequel to see where Andre and Zoe go from here.

This book was provided to me by an author representative for an honest review. I was not compensated in any way.

Taylor Dean lives in Texas and is the mother of four grown children. Upon finding herself with an empty nest, she began to write the stories that were always wandering around in her head, quickly finding that she had a passion for writing, specifically romance. Whether it’s paranormal, contemporary, or suspense—you’ll find all sub-genres of romance in her line-up.