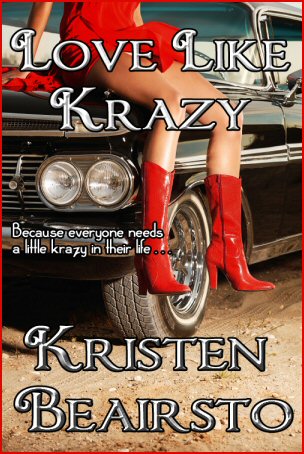 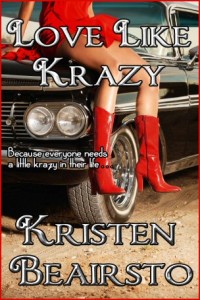 Today I’m happy to be hosting Kristen Beairsto.  She’s written a fabulous guest post on her first attempt at self-publishing, and she also has a great book out, Love Like Krazy.  First, we’ll hear about Kristen’s first self-pub attempt, and then get an excerpt about the book.

Take it away, Kristen!

I get asked quite often why I decided to go the self-publishing route (or indie author route depending on your personal label preference).  I’ve even had someone make the comment, “Don’t you think it’s easier to fail since you don’t have a big publisher behind you?”

Honestly, I don’t know.  And personally, I don’t think it really matters.  Why?  Because failure can sometimes be the best thing to happen to you.  (This is of course my own totally unscientific humble opinion.)

About four years ago, I waded into the publishing industry for the first time in the form of a self-published paperback fiction novel.  Mind you, this was before epublishing became popular, so things weren’t quite as easy as it is today.  I created my own publishing company and invested heavily in my product.  I eagerly dove in after extensive research on different marketing strategies and felt confident I would succeed.  My heart and soul went into the company and selling that book.  What happened?

Epic failure.  It was truly spectacular.

After a broken heart, a pity party, and several hours of wallowing and trying to figure out just what went wrong, I took a step back and re-evaluated.  And I learned more from that failure than I ever would have learned if I had succeeded.

Now, I know that paperback I so proudly put out and fervently peddled is a prime example of what not to do when you decide to self-publish.  Is it embarrassing?  Sometimes, sure.  Do I regret it?  Not really (although I have moments where I roll my eyes at my naïveté at the time).  But by and large, I don’t regret it at all.  I tried my best and gave it everything I had, what more can I really demand of myself?

So maybe instead of focusing on the failure, we should let it happen.  Not on purpose of course, but if it happens it happens, we learn and move on to the next adventure.

What do you think?  Do you think we focus too much on the possibility of failure?

Most women would probably be offended at being mistaken for a stripper, but Kit Conner finds the situation rather comical. But despite Kit’s outward appearance of being able to

handle just about anything, few are aware of the dark secrets Kit harbors and the demons she hides by cloaking herself in a wall of crazy antics and an outrageous fashion sense. As she returns to her hometown to play the role of maid of honor for her best friend’s wedding, Kit’s determined to hold on to those she holds dear for as long as she can. The only thing standing in her way is the absurd attraction she feels for Benjamin Mathews.

Benjamin Mathews is a guy who appreciates things to be slow, steady, and safe. Ben knows many consider him to be boring, but he’s happy with his life and loves the horse ranch he runs with his brother. The only thing he worries about is surviving the planning of his brother’s wedding.

With a wedding between Kit’s best friend and Ben’s younger brother fraying the nerves of everyone involved, Kit’s return home brings out her dark secrets into the light. The emotional overload starts to weigh on Kit and she begins to see Ben as an anchor. As their relationship intensifies, Kit struggles to believe they might actually have a future and soon finds herself fighting for the love she never thought possible.

Ben and Greg arranged things so everyone could relax for the first few hours before the real entertainment showed up. Ben glanced at his watch and noted the stripper would show up in about an hour.

As he grabbed a beer for himself, he started to head towards the poker table. As he moved passed the front window, he heard the music before he saw its source. Loud blaring techno music nearly drowned out the country music behind him. It came from within a black Cadillac convertible pulling into the driveway. The New York plates said KRAZYLV.

The music suddenly died as the occupant in the Caddy turned the engine off. The driver’s head was covered in a red zebra stripped cowboy hat obscuring their face. As the driver climbed out, however, he had no doubt in his mind she was female.

Ben first saw the flame red cowboy boots step out of the car. She turned to close the car door and turned her back to him. Above the boots, red leather pants hugged every curve of two very long legs and wide hips. From there, a red tank top clung with a plunging neckline covering her torso, which included a flat stomach and large breasts. Long blonde hair curled at the ends around her breasts. But as she turned her back to him, Ben discovered the top only covered the front of her and a few crisscrossed strings held the top on in the back, exposing smooth skin. She bent over to grab something from the backseat of the car and displayed a very nice view Ben greatly appreciated.

When she turned to face him fully, he saw she still wore sunglasses despite the sun being almost completely set. Even from the distance he stood, Ben could see the deep red lipstick she wore, the heart shaped mouth practically invited a kiss. But between the sunglasses and hat brim pulled down, he still couldn’t see her face clearly.

She was an hour early, he mused, but he would forgive her since she was sure to stir the party up.

Outside, Kit pulled her backpack from the backseat of her Caddy, turned and glanced up at the two-story house where her best friend lived. She grinned, studying the exterior of the home. Apparently, her best friend was well on her way to becoming a Matthews.

The Matthews were one of the wealthiest and most influential families in the small California town. Raymond Matthews, Greg and Ben’s father, was a banker and venture capitalist. His wife, Loren, up until recently was a highly successful businesswoman and now, from what Kit understood, spent her extra time with her philanthropy. But unlike most of the rich people she came to know and meet, the Matthews were genuine people.

Of course, Ray and Loren Matthews weren’t above using a regal demeanor when the moment called for it, she mused.

Yep, Anne was well cared for, Kit decided as she started up the drive towards the front door. As she stepped closer, Kit realized she heard the low hum of country music and remembered the bachelor party Anne told her about. She smiled in anticipation as she wondered whether or not the stripper arrived yet.

Before Kit reached the door, it opened and Ben stepped out.

He still looked the same, she decided. Tall and handsome, with wide shoulders screaming lean on me, and those piercing midnight eyes.

Kit sighed inwardly as she felt the familiar flutter in her stomach. Damn, she was still attracted to him. Oh well, she dealt with it as a teenager, she could deal with it as a grown woman.

“Hi, you’re early, but that’s all right.” He looked down at her backpack and frowned. “If you don’t have a stereo or anything, that’s fine, but I hope you have your own music. I don’t think you’d like dancing to the stuff we have.”

Ben watched her heart shaped mouth frown, the rest of her face still obscured from view. The backpack she carried didn’t seem to carry much. He certainly hoped she had her own music, for the price they were paying, the least she could do was provide her own music.

After a moment, a seductive smile slipped across her mouth. There was something oddly familiar about her, but unable to see the majority of her face because of her hat, sunglasses, and the dark, Ben wasn’t sure how he might know her.

He gave her a friendly smile and nodded. “Good. Why don’t I announce you first?” He turned, opened the door and stood in the doorway, blocking the view inside the house. Ben asked someone to turn off the stereo. “Now, gentlemen, I would like to introduce the real entertainment of the night,” Ben announced.

Moving aside, Ben turned and motioned for Kit to step inside. The seductive smile stayed in place as she stepped over the threshold of the door. A few men whistled in appreciation, a few others gave catcalls.

Smugly watching his buddies’ reactions, Ben saw her mouth curve from the corner of his eye. Glancing down, Ben noticed she had yet to remove the sunglasses. Seeing her seductive smile change, something else nagged his brain.

“Honey, no offense, but what’s your costume?” Ben whispered out of the corner of his mouth.

Ben watched the amused smile spread fully across her lips. Pulling her sunglasses down the bridge of her nose, she turned slightly so the light in the room fully illuminated her face. She looked at him over the top of the glasses with familiar wide pale blue eyes dancing with mischief.

Her lips parted to reveal white even teeth. “A maid of honor,” she drawled with a knowing wink. 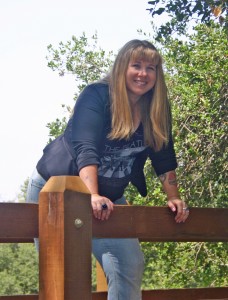 An avid reader since she first learned to read, Kristen discovered romance novels as a teenager. And what can she say? She was a goner. Kristen discovered she’s a sucker for a good love story, strong characters, and that all-important happily ever after. She wrote her first novel length story at the age of eleven and after falling in love with romance novels, her writing started featuring romantic elements.

When Kristen’s not reading or writing, she’s hanging out with friends, family, her two rambunctious daughters, and her exceedingly tolerate husband. She’s also a huge New York sports fan.