Mark of the Witch – Jessica Gibson

She’s also written down a playlist that she listens to while writing.  Let’s take a look at the list, and then the book.  To enter, please fill out the Rafflecopter below.

Thanks for having me today Carly! Here are some of the songs I listen to a ton while writing. Some are from writing Mark of the Witch, some are from current projects….this is me in playlist form. 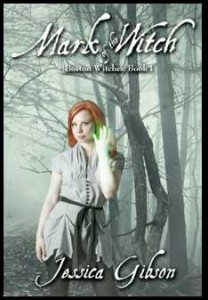 Mark of the Witch

Magic flows through Jillian Proctor’s veins as surely as blood, but so far her life outside Boston has been peaceful. William Morgan blows into Jilly’s life like a hurricane, unleashing her magic and sending her out of control.

Unknowingly, William brings an enemy who only wants to posses the power of the witch. Jilly must learn to harness her magic before she loses it – and everything in her life is destroyed.

William watched her fingers move smoothly through her hair, with an odd expression on his face. Looking up, she found him staring at her, and smiled shyly. She had been so absorbed in telling him the dream that she had forgotten he wasn’t wearing a shirt; now that was all she could think about. She could almost feel the heat coming off of him, and she shifted a little on the bed. The look in his eyes was unmistakable now, and she got up quickly. She had stayed in his room far too long and he was wearing too little clothing for her comfort.

He got up as well and pulled her into his arms, kissing her so fiercely it took her breath away. Her head got a little foggy, and she was enjoying the feeling of his bare skin under her hands and the tiny jolts of electricity running all over her body. The voice in the back of her head telling her to get out was quickly being drowned out by the much louder voice shouting at her to stay.

As though he could hear her mental argument with herself, he pulled away and stepped back a few steps. “You should probably go,” he said in a husky voice. “If you don’t we’ll end up doing something we’ll both regret in the morning, and I don’t want us to end this before it’s even started.” He stepped closer, brushed his thumb across her swollen lips, and kissed her on the cheek. “I’ll see you in the morning, Jilly. Sleep well.”

She hadn’t spoken at all; she just nodded her head to whatever he had been saying. She stumbled back to her room and collapsed back into bed, her body melting into the mattress as though all of her bones had gone missing. She slept like the dead until morning.

Jessica lives in California with her husband and young son. She loves to read, and 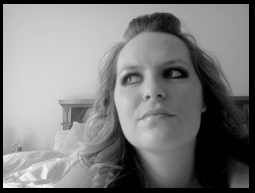 that love helped her to branch out into writing. Aside from writing, she runs an online event planning business called the Release Day Diva. In addition to novels, Jessica writes and maintains the blog Book on the Bright Side. Keep up with Jessica and her latest releases and events on her blog.