Over the Cliff’s Edge by B. Jane Lawson 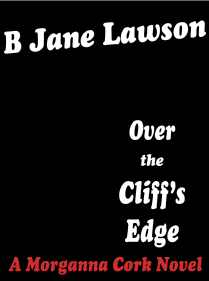 I’m happy to have B. Jane Lawson here today with her book, Over the Cliff’s Edge. She is giving away one ebook to a commenter on this blog, so please leave a comment with your email address if you are interested in winning the book.

Over the Cliff’s Edge

Book 2 of the Morganna Cork Series

Morganna Cork has survived her first month in Puesta Del Sol. A month in which she discovers she’s part of the Magick community filled with shifters, psychics, werewolves and individuals with myriad other powers.

Her estranged aunt, Aiofe, has returned to take control of the Magick Council, the Cliffside Inn, and the sacred stones that her cousin Maeve and she hold in their possession.

With the help of a mysterious magical historian, Morganna learns that she is at the center of this Magick battle and that Aiofe will stop at nothing to get her hands on an ancient family heirloom and Morganna.

The romantic tension between Morganna Stone and werewolf pack leader, Callupo Stone, reaches its breaking point as the Cliffside Inn is under siege and they navigate their way through the betrayals and dangers of this war.

Earlier that evening, an abrasive pounding on my bedroom door jarred me from my slumber. I was so tired my eyeballs burned. Since being flayed like a fish, I’d been avoiding sleep; I was afraid I’d wake back up in that cave. I was nearly delirious with exhaustion.

Not wanting to leave the comfort of my sleep-warmed bed, I called out, “Come in already,” because, really, who else would knock on my door like that?

All six-feet and four inches of Callupo Stone bounded into my bedroom. He was clad in a black leather jacket, jeans and boots. What could be said about Callupo that couldn’t be summed up with a meaningful gulp?

Shadows concealed his face and expression. “Get dressed. We’ve got some work to do.” The words were ground out purposefully, every syllable calculated to deliver a moderated tone. I still knew he was pissed.

Since arriving in Puesta del Sol to work for my cousin Maeve at The Cliffside Inn, he’d been this grumpy, sexy, pain in my behind. Then, after an attack on the Inn by Aiofe Cork and her cronies (Aiofe being Maeve’s estranged mother) he’d been appointed my around-the-clock bodyguard. I’d made the mistake of going down to the beach alone, albeit to look for Callupo who I thought was injured, and been kidnapped by Aiofe. How were Anya and I to know that she had cursed some of the magical objects Uncle Brendan had left behind? Phantasmagoria was another one of her brands of trickery. After being held hostage for nearly a week, Callupo and his pack rescued me. Suffice it to say that I was devoid of independent decision making privileges when he was on bodyguard duty.

Also, Callupo was a werewolf. This meant he was stronger, hotter (I mean literally, his temperature was always feverish) and more ferocious than your average man. He was also strangely territorial, but I wasn’t going to consider the ramifications of that at this moment in time.

“This is not question and answer time. This is do as I say and let’s get the hell out of here time.” Yep, super pissed.

Since he’d demanded that I leave him be just this morning, I could be assured that this little excursion was not of his own volition. Instead of waiting for my reply, he started to pull drawers out and rifle through them.

“Do you have anything black in here?”

“Hey!” I shouted as he started tossing items onto the floor. “Do you mind?”

I slammed the drawer he palmed shut and threw my body across the dresser. Arms flung wide, I demanded with more courage than I felt, “You are not going through my clothes.”

Callupo took a step closer, crowding me as per usual, “Two minutes. Then I’m picking you up and hauling you out of here in whatever level of dress you reach.” He was much too controlled to let the door slam behind him, though.

I ran a hand through the lustrous, red hair that now fell in a thick tumble down my back. The spell Maeve had cast to make my hair grow back had caused it to return thicker and longer than before it was burned off. I tied it back in a braid before throwing on black leggings and a sweater. I chanced dashing to the bathroom to run a toothbrush along my teeth. When Callupo came back in, I was zipping up my leather motorcycle jacket.

He jerked his head and then I followed him silently as we glided through the quiet halls of the Inn. Down in the sitting room, the crackle of fire blazing in the hearth was the only sound. Two heads swiveled in our direction simultaneously. Ralph Stone, Callupo’s adorable younger brother, and my best friend Anya Demidov.

Including their dark hair, Ralph and Anya were all in black, as well. I gave her a questioning stare, but she shrugged her shoulders, apparently no more informed than me.

“Let’s go.” Ralph stood up and lumbered through the front door. We all followed suit.

It was early December and not quite forty degrees out. A thick fog coated the atmosphere from the ground up, and if the moon was still high in the sky, I wouldn’t know it. I shivered, partially from the cold and partially from the eerie cast to the landscape. How were we going to drive if the fog was so dense it obscured Ralph standing next to me?

Callupo slid effortlessly into the driver seat and started the engine. Ralph first helped Anya in then hopped in next to her in the back of a never before seen black Range Rover. I debated climbing in the back, as well, but Ralph’s cocksure grin stopped me, a silent dare. I glared back and slammed the door behind me once I was settled in the front seat.

At the click of my seatbelt Callupo squealed out of the drive, the force of the acceleration throwing me against the seat. The way we cut through the fog gave the impression that the clouds were rolling past us at a hundred miles per hour instead of the other way around. I envisioned what we must look like, a motorcade of one, headed to our destination on a top-secret mission.

I tried for bravery, but my white knuckles clutching the armrests gave me away. How could he see anything? We were like an airplane flying through a cloud. What if an animal decided to cross the highway? Or a person for that matter?

We were at the interchange of Seacliff and Main in less than five minutes, I cringed as we turned the corner, surprised that we hadn’t ended up on two wheels. We passed where Bar None, Maude’s and Gael’s would have been in a blink of an eye.

“You, uh, want to slow down?” I managed to squeak out.

Ralph responded instead, “Relax Morganna, our night vision is impeccable. We can probably see better in this than you can during the day.”

“Oh,” I replied dumbly. I wasn’t able to make my hands unclench so I closed my eyes instead.

This was likely a good opportunity to get some information from Callupo about our destination, but he didn’t seem in the chatty mood. Frankly, I wasn’t going to do anything to distract him from driving. Once we settled onto the highway the consistent rhythm of the car lulled me back to sleep. It was the most comfortably I’d napped so far. I was hoping it was the car and not the proximity.

Given my preference, I could have slept slumped against the window, my seat heater cranked all the way up, for hours. This mission’s director was Callupo, though. He shook my shoulder gently, as we switched lanes to exit the highway. When I opened my eyes, the first signs of dawn were showing.

Below is the second short excerpt from Ralph Stone’s point of view.  The Ralph Stone POV Series will be a continuous one until the third and final Morganna Cork novel is released.

The minute Callupo scents something with his hyper-olfactory glands he becomes ruthless in its pursuit.  How the heck he scented her on me, when I’d never been closer than thirty feet to her, is beyond me.  He’s always been like that.  Eerie predator senses, even better than mine.  They say when you lose a sense the others compensate for it by improving.  Callupo’s other senses – like emotional awareness – may be lacking because of his more primordial capabilities.

I lied through my teeth, treated him like he was nuts.  Dude – I said – you’ve really got it bad if you’re imagining that I smell like her. If you’d like I can take this T-shirt off and let you sleep with it.

I got punched right in the gut for that one.  Wasn’t surprised. I suppose I had it coming.

What did surprise me was that Ilana kept her mouth shut.  Pretended to not even notice my absence.  Even had Niko running circles to keep her happy when I returned.  For just a fraction of a second, I caught her eye.  The blush that tinged her pale neck and throat didn’t hurt the ego.

I digress.  That’s why I waited a week to come back down to the City.  Every random check-in Callupo sprung on me was a wasted effort.  I know him much better than he thinks.

I’ve been following her for a half mile now.  I have no idea what she’s doing.  We’ve been up Grant, through Union Square and she kept on with that brisk little trot of hers.  Like someone might stop her.  She’s wearing a navy pea coat and her hair looks like flames licking across the wool.

I smack my forehead.  Chinatown. Of all the places to try and keep tabs on her.  The smattering of shops, boutiques, carts and tourists ambling around make it a very difficult not to get too close in order to stay with her.  The aromas wafting in the area makes me salivate and lose focus. I home in on the shock of color that is her hair.

I watch her pop in and out of shops, haggle with some women over a pair of jade bracelets and then slide into a restaurant.  I’m so engrossed in what she’s doing I lose track of where I’m at, my surroundings.  That’s why I nearly shift on the spot when a mason-like fist grabs me by the throat and begins to crush my windpipe.

No idea where she’s at – Callupo says to me – I must be paranoid, you said.  The irises of his eyes have changed to wolf, but his body remains human.

B. Jane Lawson lives in Los Angeles where she is a business woman by day,

writer by night and cyclist on the weekends. Her obsessions include Starbucks soy chai lattes, fashion, and music.

She has had a life long love affair with novels of all kinds. B. Jane’s favorite genres include paranormal romance, historical fiction and true crime. Her favorite authors include Amy Tan, Karen Marie Moning, Pat Conroy, Jane Austen and J.K. Rowling. She loves to travel and her dream vacation is a safari in Africa.