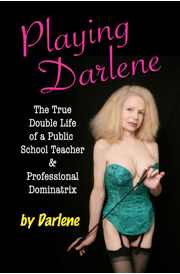 Today I am happy to be reviewing and featuring Playing Darlene, by Darlene. First, I want to take a look at the book, and then I will share my thoughts on it.

“Playing Darlene” lets the reader take a peek into the mysterious lives of professionals in the sex industry and some of the jaw-dropping encounters she had with the thousands of clients whose fantasies she helped come true. With everything from role playing a shopaholic wife being spanked by her husband to wrapping up a muscular cross-dressing client in plastic and watching him wiggle, Darlene helped men realize their most secret desires…while she wasn’t grading school papers on her breaks.

Darlene’s true stories of balancing her two different personas are frequently shocking, at times hilarious, and occasionally touching, but at the heart of the story is a woman on a personal journey not only to reconcile with her past, but also to discover the full potential of her own sexuality.

Then one fateful day — someone mentioned slaves, whips, chains, and dungeons.  That sounded like some kind of theater (oh, good–acting again), and I wanted to know more about it.  I heard the word “Castle”, but that was it.  The conversation was interrupted, and I didn’t know where it was.

I went home that night and went through the phone book.  There must have been dozens of businesses starting with the word “Castle”.  The Castle Liquor Store, The Castle Nursery School, and even The Castle Laundromat.  I started calling.  And calling.  I was on a mission.  “Is this the place with the whips and chains?” I’d say over and over again.  “Sorry, lady, you’ve got the wrong number” was the usual response.

Finally, this place had to be in the phone book.

And it was.  Finally a guy on the other end of the phone said in a slow drawl, “Yeah, we got that.”

I went right over.

When I got there, I was pissed about what I saw.  The slow guy must have given me the wrong address.  There was no business there.  There was just an old house.  I was in a business district on a well-traveled street in Hollywood, but this old house was nothing.  It didn’t say anything on the building.  It couldn’t be a theater.

I parked anyhow and started walking around.  Maybe I could ask someone.  The place I was looking for was probably nearby.  There were no people around to ask.  I had to try something.  I went to the door of the old house and knocked.  Nothing.  I decided to try the door, and it was unlocked.  Who leaves a door unlocked in this town?  I opened it and inside there was just a stairway.  Still no people.

But I heard a voice.  The voice of the guy with the slow drawl.  Of course, I went up the stairs.  There was the guy, sitting behind a desk and talking on the phone.  He looked like an extra from an old episode of Gunsmoke:  unshaven, clothes that looked as if they’d been slept in, and crooked, filthy teeth — what was left of them anyhow.  Behind him on the wall there was a lot of what seemed to be equipment, but I didn’t recognize anything except a pair of handcuffs.  He gave me a blank stare.

“I called a little while ago.  You gave me the address, but I don’t see…I mean I thought this was a kind of theater.  What do you do here?  I’ve done acting.  What would I have to know to work here?”

“You got to talk to my mistress.”

I have always had a fascination for things that aren’t as they appear, especially people. People who live a “double life,” so to speak, are incredibly interesting to me. Perhaps it is because my life is so “normal” that when I get the chance to read about someone who appears “normal,” but has secrets, it is very appealing to me.

The story starts with a quick background of the author and what happened in her childhood that she believes brought her to want to become Darlene. Again, this is not a normal childhood, but a very destructive and dysfunctional one. The author then takes us on her journey to find her place, and how she ended up being Darlene.

From there, we hear stories about the acts she performed while working in the dungeon. I found the way the dungeon operated fascinating, as well as her clients and what she did for them. Some of the stories were surreal – some of this stuff simply couldn’t be made up; it HAD to be genuine.

I did like this book, but I was left wanting more, however, I can’t place what “more” I needed. I felt the author was authentic in her voice, and in her story, but it just seemed to be incomplete to me – like there was something missing.

Darlene was born in Hollywood, California, and grew up in Pasadena, a quiet suburb near Los Angeles. She received a BA in German from California State University, Los Angeles. For several years she worked in television and film. 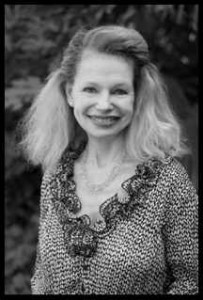 Credits include General Hospital, Chicken Soup for the Soul, and the female lead in the film Monstrosity in which she played a spaced-out punk rocker. She even photo-doubled for Christian Bale in Empire of the Sun and Corey Feldman in Friday the 13th: A New Beginning (when they were 14 and 12 respec- tively). For the past 20 years, she has been a public school teacher in Los Angeles County. She currently lives in the San Fernando Valley, where she can be found indulging in her favorite hobby, ballroom and country-western dancing. Her next book is scheduled to be released in early 2013.