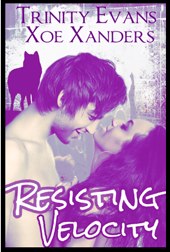 Number of pages: 185 pages through Kindle

As frontman of up-and-coming rock band, High Velocity, werewolf Zane Alexander has everything a man could want: Fame, fortune, friendship, and a pack to call home. Well, almost everything. Despite being able to take his pick of pretty much any woman, he wants the one girl he can’t have—the one girl who’s eluded his every advance.

Charlie Banks has always had a thing for Zane, but being the band’s head of security, she knows firsthand just the sort of guy he is. She’s determined not to become just another notch on his bedpost, but if doesn’t stop the want for a mate curling in her gut. It’ll happen, someday—it just won’t be Zane. She’s decided that it’s time to leave High Velocity, to find a nice little home and settle down to live the rest of her life, away from sexy smiles and ripped bodies of rock stars.

But when someone threatens Zane’s life, she’s the only one he wants to protect him. Except, Zane has a hidden agenda. One that involves claiming Charlie as his mate, once and for all.

Breathing in short, sharp breaths, Zane followed her through the winding corridors of the Richter Stadium, past the women’s bathrooms and down a flight of stairs. He held his breath for a moment as he slid through the remaining security crew. His golden eyes zeroed in on the whipcord lean beauty, a few dark curls coiling down from the sensible bun she always wore it in.

She stopped, hesitating right outside the doors. Two more steps and he’d lose her to the nightlife, his identity keeping him from following her any farther. If fans saw him, his life would become a hurricane of screams and groping hands. He wasn’t in the mood to put on his usual charming-playboy air to deal with them and he knew that going furry on their asses would damage his career.

Now or never. As she stepped out, he lurched forward, his pulse pounding furiously at his throat, and he crossed the floor in three strides. His fingers curled around her shoulders, firm and commanding, though he knew she hated it when he pulled the alpha role. She spun and her lips formed a thin line, as if she’d been expecting this. She’d known. You couldn’t really lie to pack and get away with it.

“Charlie.” The one word was all he could say before her eyes pinned him. They were pale as a sheet of blue ice, staring up at him with a gentle ferocity that she’d only ever reserved for him. He had no doubts that she wanted him—he’d smelled it on her in the past, saw the way she looked at him sometimes, as if she was seeing through to his soul—but she was wary. Guarded. The walls around her heart were made of marble and he was left pounding both fists against the cool stone.

“You can’t leave.” His words were a statement. A fact.

“I can and I am,” she replied coolly.

“What about the guys? What about High Velocity? You’re just going to throw it all away?” He was surprised at the intensity behind his words, but he was far from done. “Are we not paying you enough? There’s always ways around that. How much will it take?”

She blew out a harsh expel of air and glanced down at his hand clamped around her arm, but she didn’t bother to pull away. Her winter gaze met his molten gold once more. “I’ve made my decision, Zane. You need to respect it. There comes a time in everyone’s career where they have to make a choice and take a stand. This is it. I’ve put in my notice, I’ve followed protocol. There shouldn’t be a problem.”

A growl slid up his throat, escaping with a rumble. “I don’t give a damn about protocol. You could flash your tits to the crowd if you wanted and we still wouldn’t fire you. I don’t care. You’re part of our group. And, like it or not, you’re part of the pack. My pack.”

“You and I both know that I’ve never really been part of the pack.” Her voice carried a touch of wistfulness. She was right—she’d always been a bit of a loner, keeping herself estranged from the members of Elysium, try as his parents might to welcome her in. But she’d never been distant with Zane and the guys and he wasn’t about to let that happen. Not now.

She lifted a brow. “Since when are you my master?”

“Since you started talking crazy shit about leaving us!” He tamped his anger back down. He never had a temper. What was up with him? He took a deep breath, letting it whistle out his nose as he tried to soften his posture, tried to be less demanding. “We need you. Okay? I respect your decision to quit, but you don’t have to skip town and leave us. Just stay.” Please…

Her smile was tight. She shook her head slowly, like he just didn’t get it, and pulled free of his grasp. “Goodbye, Zane.”

His mind spun, thoughts bouncing off the walls of his head as he tried to scrape ideas together in a last-minute rush. He needed more time. He needed a damn good reason for her to stay, but damn it, he couldn’t think! She turned around, agonizingly slow, and he could see the muscles in her back through the crispness of her suit.

“Charlie. One last night.” His voice was soft, a plea in the undercurrent that he cursed himself for exposing. She stopped and he moved forward until his chest was pressed against her back, one arm wrapping around her waist. He pulled her against him, her body cupping his perfectly, like it was made for him.

She stiffened, but he didn’t let her go. His arm snug around her, he rubbed his chin lightly across the back of her neck, letting the stubble scrape gently against her skin. He murmured in her ear, using the sexiest voice he could muster. His beautiful-girl voice. “Go for a run with me. Tonight. One run.”

He’d figure something out between then and now. He’d get her back.

Trinity Evans is an upbeat, slightly off-color author with a wild imagination and a taste for the eclectic. Born and raised in a small-town Americana, she loves the lighter and fluffier side of life with some paranormal spice thrown in. She definitely enjoys the more comical side of relationships. She adores hearing from fans and you can find her at trinityevans.wordpress.com.

Xoe Xanders is a quirky small-town punk princess whose ideas range from dark and dangerous to light and fluffy. She enjoys writing in the vein of paranormal, fantasy, and soft sci-fi, all of it with a romantic edge. She believes that love is love—no matter what gender, race, or color—and writes both straight and LBGT romance. Wanna stalk her? You can find her site at xoexanders.wordpress.com

As head of security for the band High Velocity, Charlie Banks has seen first hand how the band members operate. She has also pushed away every advance the lead singer, Zane, has put on her. She doesn’t want to be another notch in a very long bedpost.

Zane has always had a thing for Charlie, and when she announces she is leaving her position as head of security, Zane realizes he must take things into his own hands to make her stay, and also make her realize that they belong together.

The camaraderie between the band mates was great, and I found myself laughing more than once. I liked Charlie and the way she could more than hold her own against a pack of alpha males. The scenes where the band was playing at the concerts reminded me of my old concert going days.

The story itself was also good, but somewhat predictable, which is not always a bad thing. I also thought that the werewolf aspect could have been left out, and it would have still been a good story.

One thing that struck me as a little odd was the fact that the men seemed more alpha in human form than they did in werewolf form. The scenes with them as werewolves were almost sweet, as I imagined a bunch of puppies running around playing with each other.

As I read the story, I was talking to a friend and I commented that it seemed as though there were two different writers (I hadn’t looked at the author). Obviously, I was right. I think the story could have been better if the writing had been blended a bit better, which is difficult to do when two people have distinct writing styles.

Would I recommend this book? Absolutely. It’s a fun read!