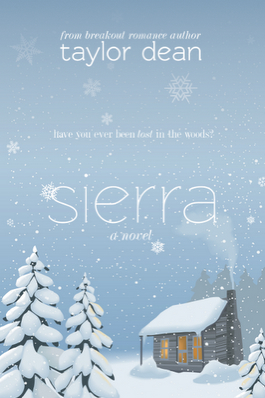 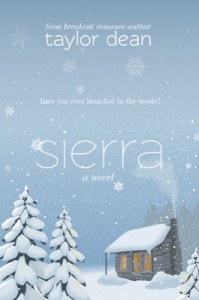 I’m very happy to have Taylor Dean here today. It’s rare that I feature authors anymore, but I fell in love with Taylor’s books when I read Lancaster House on a blog  tour.

I picked up Sierra a couple of weeks ago, and really liked it. I asked Taylor for an excerpt, and she went above and beyond, providing not only her favorite scene, but an explanation from her about it.

I will  be gifting a copy of Sierra. Please leave a comment and I will pick the winner June 30th.

So onward. Let me introduce you to Sierra…

What it’s about: Alyssa Fontaine’s life, loved ones—everything familiar and dear—are brutally taken from her.

Taken captive by two men, she endures a horrific nightmare. A new life is forced upon her and even a new name.

Just when it appears that no hope is in sight, she is saved by an unlikely twist of fate. Trapped in the beautiful Sierra Nevada Mountains, life will open its arms to her again and she will embrace it. She will find love such as she never knew existed.

Sierra is a heart-wrenching story of the power of the human spirit to survive amidst impossible circumstances and severe losses. It is a story of survival . . . and hope.

The following excerpt from my novel, Sierra, is one of my favorite scenes. Sierra is my personal favorite of all of my books, hence I love many aspects of the story. However, there is one particular scene that I adore. It is the scene when Alyssa first arrives at Alex’s cabin, broken and beaten, and having endured cruelty unlike anything she’s ever experienced before. Suddenly she’s faced with Alex, a man who bestows kindness and compassion upon her. I love the way he cleans her up, tends to her wounds, and helps to erase her pain. I love the stark difference between Alyssa’s experiences with her kidnappers, Adam and Pa, and then with Alex, her savior. It touches my heart. The song that ran through my mind as I wrote this scene is from the musical, Jekyll and Hyde, entitled, “Sympathy, Tenderness.” Listen to the song and read the scene, and you’ll see what I mean!

The CD player, on repeat, continued to bring beauty into an ugly evening. It was one of his favorites, Samuel Barber’s Adagio for Strings. Alex wanted to turn it off.  He didn’t want this memory to go with this music. But he couldn’t take the time. If he dallied, they might change their minds. The doctor in him took over. He mentally gave her the once over. So far, all of her injuries were relatively minor from an emergency stand point. He was sure, if asked, she would disagree and if he’d suffered what she had he would’ve also. But he knew he could clean her up, dress her wounds, and she would eventually be fine. Her mental condition was another story altogether. There are some things a doctor cannot heal. The psychological wounds they had inflicted upon her were beyond horrific. He shook his head. One thing at a time.

“Please sit,” he whispered. Her eyes were drawing him in. She didn’t seem to be scared of him, she seemed to know he wanted to help her. First, he filled a glass with water and held it to her lips. She drank thirstily, but then shook her head negatively when he wanted her to finish all of it. At the sink, he filled a small plastic tub with warm water, grabbed shampoo, and went back to Alyssa. The kitchen sink doubled as his bathroom sink. He had all he needed to clean her up, to include a small first aid kit. He knelt in front of her. Once again, he gently touched her chin and lifted her face to his. Her eyes were bright with unshed tears. She had the biggest brown eyes he’d ever seen.

“Just relax and let me take care of you, Alyssa,” he whispered softly.

She responded with a slight nod. Sitting in the kitchen chair, he had her slowly lean her head back till it was resting just above the tub. He gently began to wash her hair, first getting it wet and then massaging the shampoo into her scalp. She winced when he touched the spot where dried blood matted her hair, so he was extra gentle there. Her long hair was tangled and filled with dirt and bits of dried leaves. It took some time to get it clean and several refills of warm water in the tub as he rinsed. Alyssa closed her eyes and relaxed for probably the first time in days. He worked conditioner into the long locks and then had her sit up as he gently combed through it, removing all of the snarls. He then parted the hair where the wound on the scalp was located and took a look at the gash. It was angry and red, and it needed stitches, but would have to wait till he could retrieve his medical supplies from the supply room. He disinfected it with alcohol and moved on.

He again knelt in front of Alyssa. Her eyes opened and stared deeply into his, desperately trying to communicate without words. A lone tear fell, drizzling down her cheek. He brushed it away with his fingertips. This was harder than he thought. He knew this was the first gentle touch she’d felt in days. The abuse she had suffered was obvious to him as he noticed her many bruises. He grabbed his kitchen stool and sat before her. Using a washcloth, he began to wipe her face clean. As he worked, their eyes met and held. Ever so gently he wiped the dirt and grime away from days spent outdoors. And with it he wiped away tears and pain.

Alex stole a glance at Pa and Adam. Pa’s eyes were closed and a soft snore emanated from him. Adam was wide awake, his shotgun pointed at Alex, but he stared into the fire sullenly. Alex leaned forward to grab the tube of anti-biotic ointment on the table. With his lips to her ear as he brushed past, he whispered, “Everything’s going to be all right, Alyssa. I won’t let them take you, I promise.”

Alex then applied the salve to the small cuts on her face and lips. Each and every one of his ministrations clearly brought relief to her. Every time Alex looked her in the eyes, she met him with eyes that spoke volumes. He refilled the tub and washed her arms and hands and then took his time cleaning her fingernails, occasionally massaging her hand as he looked into her eyes. He also applied cortisone cream to her numerous mosquito bites. Next, he decided to tend to her neck and wrists. He cringed inside at the raw, bloody skin underneath the ropes. The first thing he’d wanted to do was cut the ropes, but he didn’t want to push his luck. However, now it was time. He went to the kitchen counter and unsheathed a kitchen knife. The sound of the knife being unsheathed brought Adam to his feet immediately.

Shotgun aimed at Alex, he yelled, “Put it down, Doc.”

Alex faced him without flinching. “I’m cutting the ropes. They’ve rubbed her skin raw and it’s going to get infected,” he said with steel in his voice. “You can have the knife when I’m done.”

Pa awoke from his snooze in the commotion.  “Sit down, Adam. Doc’s right. Let ‘em fix her up,” he growled.

Adam continued to stand, anxiously waiting while Alex cut the rope on her neck and freed Alyssa from her leash.  He then cut the other ropes and freed her wrists. She closed her eyes and Alex could see the relief on her face. He wondered just how long she had been bound. He handed the knife to Adam roughly and stared him in the face. “Satisfied?”

“Won’t do any good, I’ll just be puttin’ the ropes back on ya know,” Adam taunted.

Not if I have anything to say about it, thought Alex.

Alex turned his attention back to Alyssa. She looked ready to flee. Her eyes darted to the door. With Alex and Adam’s attention diverted for those few moments, she’d considered running. He again sat on the stool in front of her. He rested his hand on her knee and slowly shook his head in the negative as Adam settled himself back on the couch. She closed her eyes in response and took a deep breath. He took her hand in his and felt her tremble.

“Not yet,” he whispered.

He knew she was almost dead on her feet tired. After refilling the tub with clean water, he began to cleanse and disinfect her neck and wrists.

“I’m sorry, I know this stings,” he whispered.

He knew it was painful by the look on her face. She endured it well. When he applied the salve to the raw skin he knew it eased her pain considerably. He bandaged her neck and wrists and then moved down to take a look at her feet. He slowly and carefully removed her shoes. Her feet were probably in the worst condition of all. The socks were dirty and bloody. He removed them ever so carefully. Still, she gasped as he did so. Her feet had several blood blisters on them. Many had burst and looked infected. The skin was raw and cracked.  He wondered how she’d continued walking. He refilled the tub and soaked her feet in warm water. Alyssa rested her head on the back of the chair and closed her eyes. After carefully drying her feet, he lanced the blisters that had not yet burst and then applied antibiotic ointment to all of the blisters and cracks and wrapped her feet in bandages.

Alex looked up to find she was now watching his every move as he worked. There was no way he was letting these monsters walk out of this cabin with her. He’d die first. Taking her hands in his, he squeezed them gently, trying to reassure her without words. If Adam heard them talking, who knows what he would do. He was a loose cannon.

She gazed upon him like a drowning woman grasping onto the only person who could save her and give her breath. “Thank you,” she said simply, but her expression said it all.

This is a highly emotional book about two very broken people who are brought together under horrific circumstance.

Alyssa is kidnapped by two psychopaths. I won’t go into much detail, but we’ll just say they weren’t very nice to her. Alex is a man who lives in the woods in complete seclusion because of losses and circumstances beyond his control from his past. When Alyssa and her kidnappers break in to his cabin, Alex knows he must save her.

Their relationship evolves, and is perfect until Alyssa’s past comes blazing in. They are forced to give up their seclusion and happiness, and deal with the pasts that brought them together.

Although I didn’t enjoy this book as much as I enjoyed Lancaster House and The Middle Aisle, it was still a great book from Taylor Dean. Taylor has a gift for writing emotions, and I found myself in tears, as well as smiling as I read the book, and in my mind, that is a sign of a good read.