Welcome to the Sexy Stocking Stuffers Blog Hop! The weather outside is frightful, but we’ve got some delightfully warm reads for you to snuggle up to for the holidays. The participating authors are turning up the heat with sexy snippets from their books and showering readers with generosity with individual giveaways of ebooks and swag! And of course there is the grand prize giveaway. Not only can you win a $50 Amazon gift card for yourself, you can also win one to gift to a friend, on us! So, be sure to check out each author’s blog (using the links below) for different chances to win, as well as entering the grand prize giveaway!

This blog hop and giveaway sponsored by:

I’m sharing a sexy snippet from my book, Against the Ropes.
Blurb:
Five years ago Dylan Gomez had it all. He was an up-and-coming boxer with a loving girlfriend, and his sights were set on the big league. Then he let the hype of the fans inflate his ego—he thought he was invincible. That all changed when an alcohol-fueled decision altered the 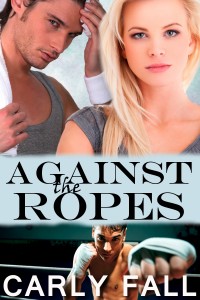 course of his life. He lost his girlfriend and then bit-by-bit his life crumbled around him.
Physical therapist, Regan Holloway, has coasted through life for the last five years. She’s been in the same place all that time and most of her things are still in boxes. Agreeing to a “friendly” date with a co-worker, she ends up ringside and face-to-face with the man she’d fled to forget—Dylan.
Dylan’s turning his life around and working his way back up the ranks; he’s got a big fight lined up in thirty days that will be his ticket back into the pros—if he can win. The only thing holding him back is an old shoulder injury and Regan not being by his side.
When Max, Dylan’s manager, convinces Regan to come with them and work on his shoulder for the fight, she knows she needs to keep things professional so that she won’t be hurt again.
In the thirty-day countdown to the big fight, secrets are revealed, their passion is reignited, and the past threatens to haunt their future. On fight day, Dylan and Regan are truly against the ropes.

Regan bent back into Cobra position feeling the wonderful curve in her spine and looked out the corner of her eye at Dylan.
They had moved the livingroom furniture around to make room for them both to fit in front of the television. Dylan was sweating profusely, breathing hard, and cursing under his breath.
“The spine is not meant to bend like this,” he muttered.
Regan said nothing, but inhaled deeply and moved into Cat-Cow as the woman on the TV told her to.
She had been wracking her brain the past couple of days on how to get Dylan to stretch more. As she suspected, his brawn was as flexible as stone, and as far as he was concerned, serious stretching was for “cheerleaders and ballet dancers,” as he so eloquently put it.
Exhaling, she rounded her spine and glanced over at Dylan again. He was going to be sore tomorrow.
The woman on the TV told them to move into Downward Dog, and Regan closed her eyes and pushed her butt up in the air feeling the stretch in her extended arms and down the back of her legs. It felt great. She thought this one may be tough on Dylan’s shoulder, and she looked over at him to see how he was doing. His arms and legs looked like bent sticks, and the sweat trickled off the tip of his nose. He cursed silently, and she burst out laughing and crumpled to the floor on her stomach.
“What’s so funny?” Dylan asked, coming down to his knees.
She rolled over to her back, still laughing. Regan knew she shouldn’t find Dylan’s attempt at yoga so funny, but she couldn’t help it. He looked ridiculous in his inflexibility.
“Nothing,” she said, trying to stop the giggles.
“Yes, there is. What’s so funny, Regan?”
At that point, she had tears rolling down her face, and she realized how stressed she had been. The laughter and tears were about so much more than Dylan looking silly trying to get into Downward Dog. She wiped her eyes, and Dylan appeared above her, smiling. “Are you laughing at me?”
She shook her head, and the laughter started all over again.
“You are laughing at me!”
Dylan then tickled her ribs, which he knew from the past that would send her into more fits of giggles. Despite being weak from laughter, she struggled against him, and he put his weight on her to keep her in place.
“Stop!” she yelled between gasps. “Please! Stop!”
After a moment, Dylan quit, and she finally got ahold of herself.
Their eyes locked, and her breath caught. It was then that she realized the intimacy of the situation. She was flat on her back and Dylan hovered above her. All he needed to do was lower his body to hers, and he would cover her like a blanket. Her body screamed yes, her head yelled no.
Something in her face must have said yes, because the next thing she knew, Dylan was on top of her, his mouth covering hers. It was as if her body had a mind of its own, because it wasn’t listening to her.
Her arms wrapped around his neck, pulling him closer. Her core became molten within seconds and her legs seemed to spread on their own accord.
Dylan gently stroked her neck, her shoulder, the side of her breast and down her hip. He bent her leg up so that he could bury his arousal deeper between her legs, and she cursed the clothing that separated them. She felt as though she would weep with the desire that rolled through her.
His tongue founds hers, and he nipped her bottom lip. He kissed the side of her face, and down the column of her neck. Finding the hem of her tank top, he slowly lifted it, revealing that she wasn’t wearing a bra. Letting out a groan, his mouth quickly found her right nipple and shockwaves jolted through her body at the contact.
Good God. After everything this man had put her through, he still made her feel as though she would explode with his touch.
She ran her fingers through his hair as his tongue wreaked havoc on her senses, bringing her nipple to a rigid peak.
His hips thrust into hers, and as she felt his arousal, she gave up trying to be rational and handed herself over to the experience. Lifting the hem to his t-shirt,she let her hands run over the ridges and valleys of his strong back.
“Oh, God, Regan,” he whispered. “You taste so good.”