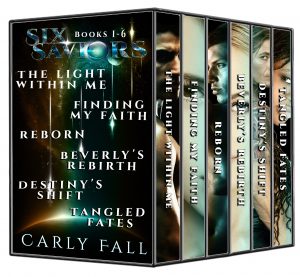 The Six Saviors Box Set is now available at all media outlets. You get the first six books in the series:

The Light Within Me
When Abby and Noah meet, there is an explosive attraction between them that neither can deny…
Unbeknownst to Abby, Noah is from another world and his sole purpose is to hunt down the evil of his people that was unleashed on Earth hundreds of years ago.
Noah tries desperately to fight his attraction to Abby so he can keep his focus on his mission, but when Abby gets dragged into the evil and mayhem from Noah’s world, he realizes that maybe with Abby he can find a home here on Earth…if he can save her in time.

Finding My Faith
Growing up in a small town, Faith Cloudfoot yearns for more out of life. Her need to explore takes her to the city of Phoenix, Arizona, where she is kidnapped and almost killed.
Warrior Rayner has a special ability-he can see spirits trapped in between life and death. When Rayner sees Faith in her spirit form, his attraction to her is immediate. As he realizes that she may be a stepping stone to getting him home to his own universe, he engages her and begins to use her as a means to an end: going home.
As the attraction grows stronger, Rayner finds himself breaking the code of ethics set by him and his fellow warriors. When Faith nears death, Rayner realizes that he must do everything in his power to save her, because if he doesn’t, he may just lose himself.

Reborn
Warrior Hudson seems to have it all – good looks, fine clothing, expensive jewelry and women waiting for their turn to sleep with him. But, what he keeps hidden from the world is the terrible pain he’s suffered for many years.
Beverly Devlone was a highly respected doctor, until tragedy and a drug addiction destroyed her career. As a lonely woman fresh out of rehab, she’s now uncertain of what her purpose is or where she belongs. When an explosive event brings Hudson and Beverly together, the attraction between them cannot be ignored. As the two grow closer, they help each other heal from the shackles of their pasts.
But true happiness eludes them when they are forced to go their separate ways, until Beverly returns with an admission that will rock the very fabric of Hudson’s world.

Destiny’s Shift
Jovan has a gift: the ability to feel emotions through touch. Recently, the gift has intensified allowing him to hear others thoughts. This uncontrolled skill has him fearing for his sanity as he distances himself from everyone.
Liberty, an SR44 female, has come to Earth by a set of circumstances beyond her control. Born into a life of servitude, she is alone, afraid, and stumbling her way through learning the ways of her new home.
As Liberty reveals her reasons for coming to Earth, it becomes apparent that the Six Saviors are in danger. As they deal with trouble from all sides, Jovan must learn to control his gift, and he and Liberty must find a way to compromise on the lives they desire, or they will be forced to go their separate ways.

Tangled Fates
When Cohen is told disturbing news of his home planet, he feels like his whole world is unraveling at the seams. Consumed by sadness, anger, and guilt for breaking his mating vows to his beloved mate, he makes a sacrificial oath to honor her.
Annis, a female Warrior, was sent to Earth and has discovered her new human body has restrictions—during the day she is blind, but at night, her vision returns. As she struggles to find her place among the Six Saviors, she finds herself the target for Cohen’s unwarranted anger. An explosive argument between them ensues, changing their relationship forever.
Blake, a half-human half-Colonist, has discovered a place he calls home. As he and Annis grow closer, his feelings for her can’t be ignored, and he must figure out a way to stay true to his heart or risk losing her forever.
As danger threatens to rip the Six Saviors apart, Cohen, Annis, and Blake must try to sort out the tangled web of their lives.