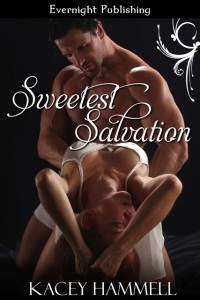 Available at Evernight Publishing / Amazon.com (and more links below)

“Hammell did a masterful job creating a story that was an equal measure of sweet and oh-so-sexy.” 4 Stars, The Book Chick with Kick

After the deaths of her husband and child, tragedies that she blames herself for, Andrea “Andy” Sheaver has shut herself off from the world. The only place she finds any relief from her shattered heart is Club Splendor, where she and her husband often frequented together.  There, Andy submits to pleasure and pain in situations so her grief is forgotten for a little while.

But Hunter Sullivan won’t stand idly by and watch Andy self-destruct. A friend of her husband, and the owner of Club Splendor, Hunter has kept his love for Andy hidden for years. He refuses to think of her at the club, cold and detached as she’s become, looking for an easy fix to take away the pain in her heart.  Hunter wants her to vibrant in life again and sets out to prove he is exactly who she needs.

Hunter sighed, which caught Andy’s attention. Her eyes met his briefly before lowering to her hands, which were clenched tight in her lap.

“What do you want, Hunter?” Her forest-green-eyed gaze met his. Anger swirled in their depths.

“I’m tired of this. Dammit.” He snarled, rising, and crossed to the fireplace. He ran his fingers through his hair and leaned one arm on the mantel. He looked over at her, stomach churning with indigestion and pain. He’d loved Patrick and Peter too. Could she not understand that she wasn’t the only one suffering?

“Tired of what? I never asked you here.”

“This!” Hunter spread his arms wide. “You. I’m so tired of seeing you locked away in this house, never leaving and pictures gone.”

“Go to hell,” Andy spat and leapt to her feet. She moved behind the loveseat, obvious fury making her hands shake as she laid them on the back of it. “You don’t have any say in how I live. I never asked for your opinion. If you don’t like it, get the hell out of my house. And my life!”

Hunter breathed deep, nostrils flaring. He could no more walk away from her than he could from the Sheavers. She was as much a part of his life, and his heart, as they were.

But his love for her went far beyond sisterly.

He pushed that thought away, buried it deep within himself as he’d done for years. She was Patrick’s girl, his wife. He always honored that.

“Dammit, I don’t want to argue with you, Andy. But you really need to move on. Live life again and leave this house.”

“I leave the house. You don’t know what I do every day.”

“Oh yes, you go out. Like the other night? Why did you go to the club? I thought we agreed you were no longer a member,” Hunter demanded, curious about her answer.

“No. You decided I was no longer a member. Not me. I never said I wanted that. Who are you to make decisions for me?” Andy retorted, cheeks flushed, hands on her hips.

Hunter had to admit he was finally seeing a glimpse of the fiery, strong woman she’d been until this last year. He liked her eyes ablaze, jaw clenched and fury radiating off her body. He just needed to provoke her enough and challenge her to move beyond these walls and back to the things she loved to do.

“I don’t want to make decisions for you.” He took a calming breath. “Listen, the club is not the place for you any longer. Without Patrick… There’s no need for you to be there anymore.”

“Why do you think that?”

“He was the one who wanted to show it to you. He never really thought you’d come to enjoy it as much as you did. Neither of you interacted with others. What can you find there now without him?”

Andy smiled, cold and detached. He hated that smirk.

“Oh, come now. You know what happens in your club. Surely, I don’t have to spell it out for you.”

Yes, he knew what she’d done inside the room she’d once used with Patrick. Though he normally didn’t interfere in his members’ activities unless there was a problem, he did ask Paige and Nolan if Andy had simply watched. He’d been shocked, then livid, to learn a few details of what happened between the three of them.

Andy had always been a devoted wife to Patrick, faithful to the core. To know she’d been an active participant at the club for the first time had suddenly left him empty and alone.

But he couldn’t allow his feelings on the matter to distract him from pushing her back into life.

He shrugged. “No. You don’t have to spell it out for me. But is that what you truly want and need in your life?  Sex with strangers? Do you need to find comfort in people who don’t care about you?”

Andy glared at him. “That is none of your business.” Her voice rose as she continued. “What I do in my life is for me to decide. I never asked to have you in my life. Don’t expect me to want you there now.”

His heart clenched. Her words were like a punch to the gut.

Yes, he’d sort of come as a package deal when she’d married Patrick. But the Sheavers were the only family he had. And when Peter was born, oh, he’d played the dutiful uncle to the little boy. Though she’d never voiced her frustration at his being in attendance at nearly all family gatherings or taking up some of Patrick’s time once a week for a guys’ night out, he’d understood the stone-faced woman who left the words unsaid.

“I always promised Patrick I’d look after you if he couldn’t.”

“Fuck off, Hunter. Don’t give me that.” Her hands fisted at her sides. “Look, please just go. I don’t need you here. I have things to do.”

He wouldn’t be so easily dismissed.

“Things to do? Like what, plan your next adventure at the club? I don’t think so. Why? Explain to me why you felt the need to go there?”

Arms wide, she yelled, “I wanted to fuck somebody. Is that what you want to hear? That I wanted to have a cock inside me for the first time in almost two years? I wanted to have a man inside, pounding me—brutal and painful. What better place to do that than at the club where I know I’m safe?”

Hunter’s heartbeat accelerated. To know she needed someone that close to her was agonizing. It was a barren and desperate act of someone who had nothing to live for. Or didn’t think she was worth much.

“Why pain? You couldn’t have found satisfaction in that. No pleasure, Andy? You, of all people, found pleasure in that kind of sex? I don’t believe for a moment that you’re now into rough sex,” Hunter said, gruff. His mouth was dry, and confusion made his head hurt. Would he never understand this woman?

Andy crossed her arms over her chest. She looked out the window behind him. Her gaze was unfocused, filled with pain.

“Yes, pain. It’s what I deserve, isn’t it?” Her gaze captured his. Hunter felt his heart crack at her desolate look.

Where to find Kacey…