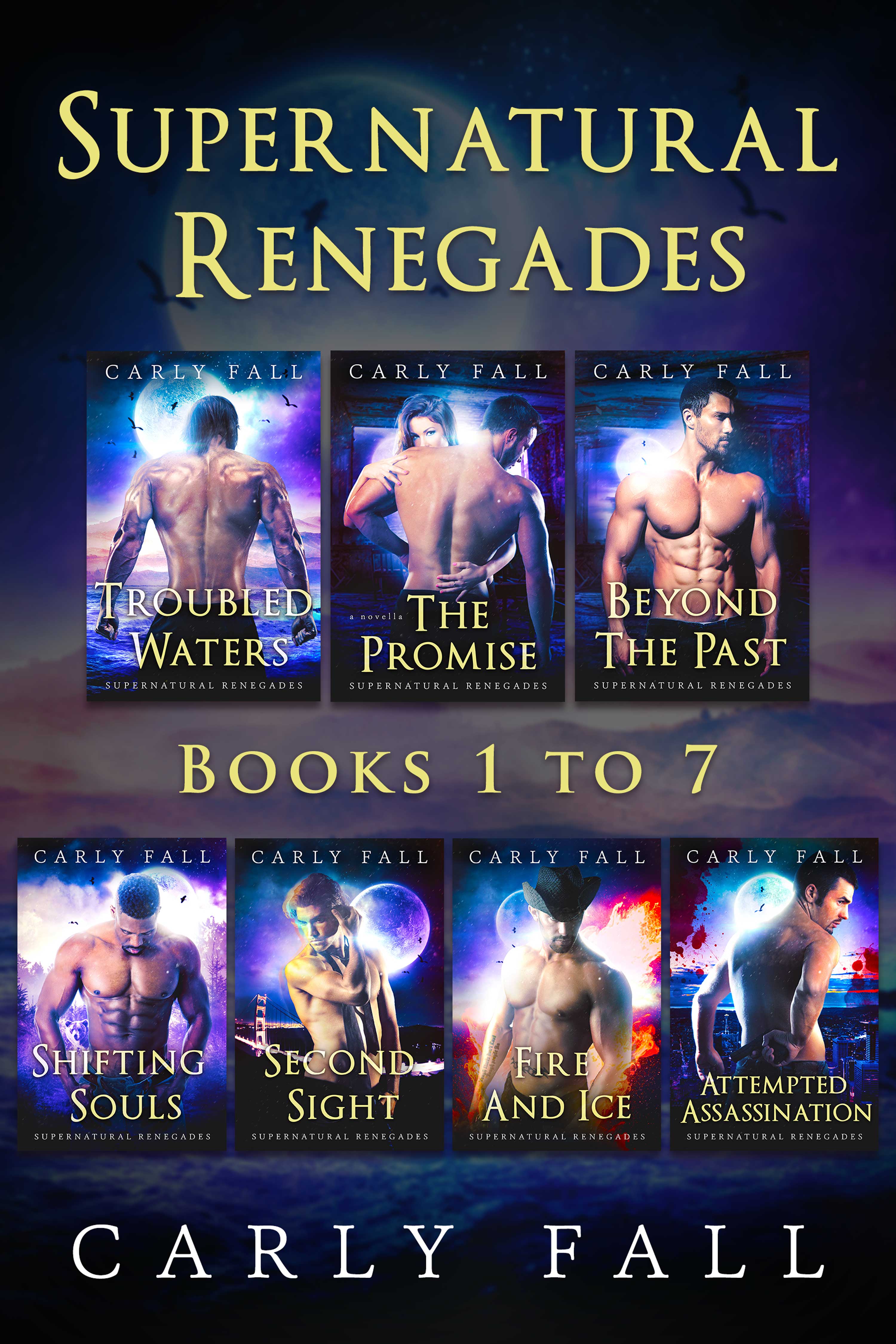 Looking for all the Supernatural Renegades books in one set? 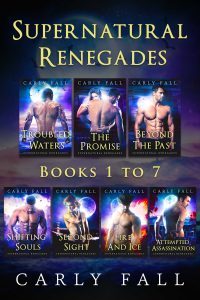 When a platoon of marines is caught in an explosion deep in the Guatemalan jungle, each of them survives, but is left with a supernatural ability …

Troubled Waters: Brody Teller wakes from the explosion with a deep connection to the ocean and the ability to control it.

When Brody is tasked with providing protection for CIA Agent Rayna Lopez and her famous sister, Brody and Rayna realize they’ve met before. Despite a significant lack of trust between them, they face an attraction neither can deny. As they fight to keep Rayna’s sister alive, deep deceptions are revealed. In the end, they must learn to depend on each other, because if they can’t, no one will survive.

The Promise: The Prequel to Beyond the Past.

Three years ago, Gabby watched her lover and best friend, Lucas Tate, walk out of her life. Despite his promise that they’d be reunited, she never heard from him again.

She encounters him once more on a snowy New Year’s Eve – when he walks into the convenience store where she’s working. With the bad weather closing all highways, the two end up trapped with each other, and their past.

Will Lucas’ reasons for abandoning Gabby be enough for her to forgive him and move into the future he so desperately wants with her?

Beyond the Past: Lucas Tate recovers from the explosion with the ability to see people dying before they do.

To protect Gabby from his secret and those who gave him the ability, Lucas leaves her and disappears into the homeless population.

As Gabby searches for answers to why Lucas disappeared, she suffers greatly at the hands of those hunting him. Reunited by the secretive operative Joe Smith, Lucas and Gabby must join forces to stop his persecutors. Lucas must reveal his secrets to Gabby, who is now faced with the biggest decision of her life: If they survive, can she go beyond the past and forgive Lucas for breaking his promise to her not once, but twice?

Shifting Souls: Garrett Bloom survives the explosion with the ability to shift into a bear.

When Joe Smith offers Garrett an irresistible job with his agency, Garrett finds his place in the organization where the rich go for protection and to have their problems solved.

Ruby Rose McDermott is in need of protection after just barely escaping a kidnapping attempt. When her father enlists Joe’s help to find the kidnappers, Garrett is tasked with the job of keeping Ruby safe.

Expecting a spoiled brat, Garrett instead finds a shy, down-to-earth woman, and the attraction between them quickly grows. An explosive event reveals the identity of Ruby’s kidnapper, exposing them to danger that’s closer to home than either expected.

Second Sight: Zachary Johnson woke from the explosion completely blind. However, when he steps in front of a mirror, he can see snippets of the future.

Zach is recruited by Joe Smith to help in the underground war against a faction of the government only known as Group Nine.

He is partnered with Joe’s old lover, Ella, a cold and angry woman. As they work together toward their end goal, Zach is able to bypass Ella’s defenses and they find themselves caught up in a whirlwind romance.

As the last phase of the plan goes terribly wrong, Zach is apprehended by Group Nine.

Will Ella save her lover, or is she the one responsible for his capture?

Fire and Ice: Ruben Velasquez was left with the ability to start fires.

After being tortured by the government he vowed to serve, he works on Joe Smith’s quiet, Texas ranch.

Katherine McCoy, a federal prosecutor in Washington D.C., is gearing up for the biggest case of her life. When she is attacked before the trial begins, it becomes clear that her involvement in the litigation has put her in mortal danger.

Hoping to keep her safe, her uncle hires Joe Smith to protect her. She is whisked away to Texas and finds herself under the care of the seductive and secretive cowboy, Ruben.

At first, their vast differences have them at odds, yet an intense attraction eventually develops. When Joe Smith disappears and a horrific betrayal is revealed, their trust is put to the test as they strive to unravel the mystery of why Joe vanished.

Attempted Assassination: Jordan Callahan woke from the explosion without a supernatural ability … or did he?

He is determined to eradicate all who pose a threat to Group Nine, the government faction he serves. His next mission is to assassinate the elusive Joe Smith, one of the greatest menaces to Group Nine.

A year ago, an explosion killed Ava Callahan’s husband and his Marine unit – or so she thought. When she’s given proof that Jordan and most members of his unit survived, she’s left wondering why he never returned home. With the help of Jordan’s unit—Brody, Lucas, Garrett, Zachary and Ruben—Ava hopes to reclaim the life she and Jordan once shared.

A series of events lead to Jordan being apprehended, but he has no recollection of his past, including his life with Ava. By using the less than conventional means of recovering his memories, they discover what really happened to Jordan, as well as the suppressed supernatural ability he was left with after the explosion.