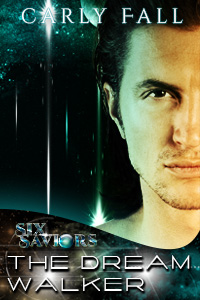 As the newest member of the Six Saviors, Nico has a distinct and rare gift. He can visit others in the most private and secret place: their dreams.

Shunned early in life and blamed for the ruination of his family, Nico doesn’t use his ability often, and appreciates the Six Saviors and their mates trust him not to walk in their dreams, a trust he couldn’t achieve with his own parents.

Alaina, abandoned at birth, grew up in foster homes. At age seventeen, she was on her own. Dark thoughts of killing others have plagued her since childhood, and she doesn’t understand where they come from or why she has them.

An explosive event brings Nico, the rest of the Saviors and Alaina together, and Alaina finds out the origins of who she is and her dark thoughts. As a Colonist targets Alaina and the murder rate rises in Phoenix, Nico must use his ability to not only evaluate Alaina’s psyche, but also find out who is ultimately responsible for the deaths plaguing the city.

“So tell me all about this dream-walker stuff, Nico,” Noah said as he leaned back in his leather chair.

Nico sighed. It had been six months since he was taken in by the Six Saviors, and no one had brought up his so-called gift of dream-walking. He just assumed they all trusted him to stay out of their dreams, but apparently not.

And they shouldn’t, but he needed to convince them otherwise.

“Noah, I don’t like to dream-walk, and I would never use it on anyone here in the silo. You have my word.”

He hated lying, but didn’t think the truth would go over very well. Jesus, with this lying stuff down, he should think about becoming a politician. It wasn’t as if he dream-walked all the time. In fact, he’d only done it once on his own since he moved in.

Noah nodded, a serious expression clouding his face. Nico tried to remember the last time he’d seen Noah smile, but couldn’t. “I know you wouldn’t use it on us, Nico. I’m thinking maybe we can use it as a weapon against the Colonists and their lovely children.”

Nico sat up, surprised. He ran his hand through his hair as guilt ate at his gut. He liked that Noah trusted him, and hated that he shouldn’t. He made a vow to himself to not dream-walk on any one of the Saviors or their mates again. If he had to do a Tambaran and stab himself in the gut like Cohen did, he would.

Throughout his life, he was marked with a scarlet X, so to speak, and people avoided him as word of his ability spread. No one wanted to be around someone who could invade the personal space of dreams. He was a loner, excommunicated from his family, from his people, and wanting nothing more than to belong.

That was why it was critical to him that Noah and the rest of the Saviors, their mates, and that half-breed Blake knew that he could be trusted to not invade their dreams. He finally felt he had landed in a place where he belonged—a place where he was accepted. He didn’t want to do anything to break the trust the others had in him. Well, he wouldn’t do it again.