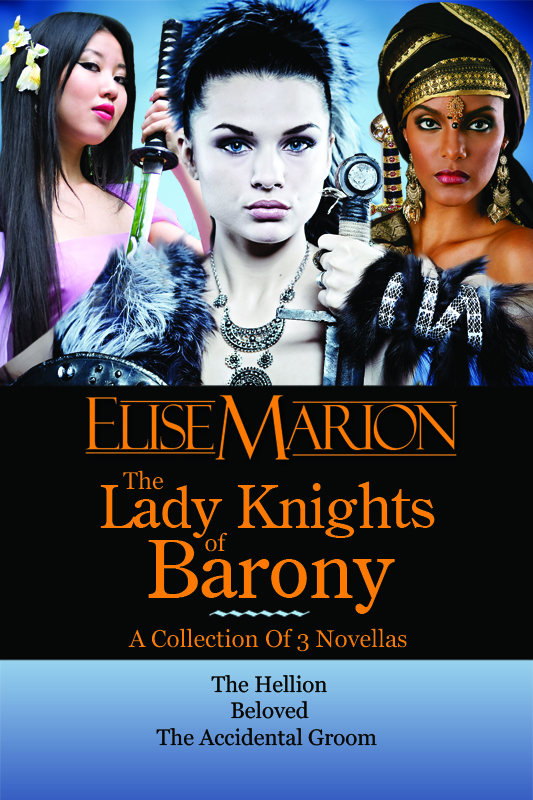 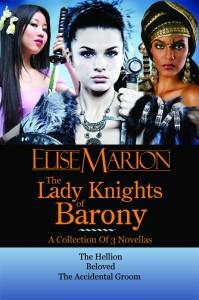 I’m very excited to be participating in the release of The Lady Knights of Barony by Elise Marion.  She’s offering up many prizes over at the Facebook Release party (http://www.facebook.com/events/383151715082807/)…you just have to read this post to get the clue you need. 🙂

And by entering below, you get your shot at an ebook copy of the Lady Nights…

With the war in Barony at an end, peace reigns and rebuilding efforts continue beneath the steady vigilance of King Serge and Queen Isabelle. The lady knights have returned home, unchanged by new titles and lands. But with a rash of kidnappings spreading across the province, the lady knights will find themselves torn apart by the machinations of a mad man.

Ava Longley, captain of the lady knights, never expected to become the target of an obsessed murderous madman. When a kidnapper is sent to abduct her, Ava sees it as the perfect opportunity to bring the mastermind to justice. To Julian Vincent, Lady Longley is no more than the means to an end. However, when sparks fly between them, Julian is faced with an impossible decision.

After being sold into slavery by her king and washing up onto the shore of Cardenas, the friendless African Amazon, Mudiwa Akua, was taken in by Barony’s female soldier’s regiment. When her tranquil existence is disturbed and she finds herself on a ship bound for the exotic island of Martinique, Mudiwa faces certain death and possible enslavement for the second time in her life, dredging up ghosts of a past she had long thought forgotten. When planter Isaac Prideux comes upon a mysterious African woman, beaten and half-dead, he takes it upon himself to care for her. He never imagined doing so would shake up his monotonous life so completely.

After the highly honored title of onna bugeisha—the feminine equivalent of a samurai—begins to lose its power in Japan, Hanako Kiyomi sees no choice but to flee. But when her deserted husband comes searching for her, Hanako escapes him the only way she knows how: marriage in name only to a stranger. Lord Garrick Overton has always admired the cool, stoic Hanako from afar. Marriage to the woman he’s desired for years seems like a good idea; until she proposes the marriage be in name only. As he sets out to win her heart, he faces not only a tough task but a begrudged man that will stop at nothing to win back what he has lost.

Their courage will be tried. Their hearts will be put to the test. Can three headstrong women maintain their independent natures while surrendering to love?

“I am sorry that our wedding ball was ruined,” he said.

“So am I. I am especially saddened over the loss of my new gown. Unfortunately, the skirt is torn beyond repair.”

Garrick shrugged. “I’ve already arranged a conveyance and escort for you tomorrow to Gladstone. Mrs. Mansfield has made you an appointment at a boutique to be measured for gowns. Shop to your heart’s content.”

Hanako thought of the courtesan’s invitation and felt relief. Now she had an excuse to go to Gladstone for their secret meeting. For tonight, she was hoping that one encounter would not impregnate her. Tomorrow night, Hanako would be prepared.

“That is very generous of you.”

Garrick smiled and stepped toward her, snaking one arm out to pull her against his bare chest. She felt his heat enveloping her, searing her skin through the thin dressing gown as he held her.

“You are my wife,” he responded, as if that explained it all.

Hanako brought her hand up to his cheek, entranced by the warmth in the depths of Garrick’s eyes.

As if her words had freed him from invisible shackles, he cupped her face in his hands and brought his lips down over hers with a groan. They were soft and pliant, warm and slick on the inside as he caressed her tongue with his. Heat gathered within her immediately, intensifying with incredible force. Her knees buckled and Hanako brought her hands up to Garrick’s shoulders to steady herself as he deepened the kiss, tilting her head to gain better access to the depths of her mouth.

Their breathing grew harsh and heavy, racing between their joined lips as Garrick guided her toward the bed. Her back met one of the bed’s massive posters, and he pressed her up against it, grinding his hips against hers as his arousal grew thick and hard between them. A low moan sounded in  her throat as the friction of their bodies moving together sent waves of longing through her. Despite her earlier trepidation, she was eager and ready knowing that this night would be one she’d never forget.

Garrick removed his shirt without breaking their kiss and Hanako raised her hands to the wide expanse of his blond hair-sprinkled chest. She lowered them over his flat stomach, bringing them to rest at the waistband of his breeches. Garrick grasped her hand swiftly, circling her wrist in a gentle but firm hold. His eyes glittered as he raised Hanako’s hand to his mouth, pausing with his lips hovering over her pulse.

“If you do not stop that, I can’t promise to take this slowly with you,” he murmured before laving the delicate skin of her wrist with his hot tongue. Hanako’s eyes slid shut and she leaned against the bedpost as he trailed a row of kisses up the inside of her arm.

“And I do want to do this slowly,” he breathed as he pushed back the sleeve of her robe to reveal more of her skin. “I want to explore your body and teach you a woman’s pleasure. Am I right in thinking that no other man has touched you?”

Hanako nodded, her mouth too dry for words.

Garrick sighed as he trailed his lips up to her silk-covered shoulder. He paused there as his hands came up to the belt at her waist.

“Good,” he said, his voice thick with desire as he tugged at the knot.

The robe opened and Garrick parted it, pushing it off of her shoulders. The garment pooled at her feet as Garrick’s eyes traveled over her nude body. He swallowed noisily, his Adam’s apple bobbing visibly and the blue irises of his eyes were overtaken by the dilating black pupils. He reached out with one hand to touch her.

Hanako shivered as he ran his fingertips from the column of her neck, down over her collarbone, the crest of one breast, and the flat plane of her stomach before circling over her hipbone. He brought his hand up again, his breath rushing from his lungs as he palmed one breast. She moaned and arched her back, pressing the small mound more fully into his grasp. Her rosy nipple leaped to attention against his skin, puckering and hardening as he teased her with his fingers.

Garrick’s other hand came up to cover the other breast and Hanako felt a fluttering begin low in her core as he massaged and kneaded, the friction of his palms against the peaks sending a flood of heat and moisture flooding between her thighs.

“Garrick, please,” she whimpered, aching for the feel of his mouth.

He smiled down at her, tweaking one of the pink tips playfully, eliciting another moan from Hanako’s lips.

Through the passionate haze clouding her vision, she tried to focus on him. Hanako trembled as he ran his hands the length of her body down to her hips before coming back up again.

“Yes,” she whispered as he touched her.

“Truly? Well, I am certain you do since you are offering yourself to me but if you do not mind, I’d like to put that trust to the test.”

Confusion intruded upon her desire and Hanako frowned. “What do you mean?”

With a wicked grin, Garrick reached behind her and untied one of the tasseled ropes holding the bed curtains against the posters. He held the silver rope up in front of her before gathering her hands in one of his.

“You withheld yourself from me because you did not trust me with your body. I know that we have not known each other long, Hanako, but I think I understand you a bit. You fear dominance and what it would do to your nature to give that kind of control to a man. But I am your husband and I want to show you that you have my utmost respect in every way.”

Hanako stiffened as Garrick raised her hands above her head, tying them both to the thick post.

“You’re tying my hands to gain my trust?”

He nodded as he checked his knots to ensure that they were not too tight.

“It will show you that you have nothing to fear, that even though I have you at my mercy, you can trust me to honor you. I will not abuse your trust, Hanako and I need you to understand that.”

He leaned down to kiss her again tenderly. “Let me show you, please.”