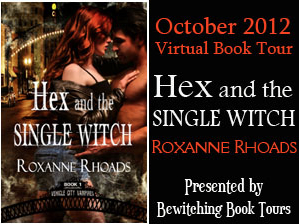 I’m happy to have Renee Vincent here today with her book The Temperate Warrior. She is giving away the entire Emerald Isle Trilogy – Ræliksen (book 1), Mac Liam (book 2), and The Fall of Rain (book 3) in ebook format to one lucky winner after the tour is over. Please enter below. 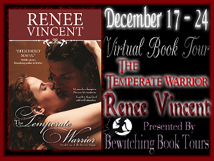 The Temperate Warrior
Book 1 of the Warrior Sagas

He was her champion. She was his weakness.

Together, they loved with wild abandon

Gustaf Ræliksen lives by the blade of his sword. After avenging his father’s murder and reuniting with his family, he wants nothing more than to settle down and have sons of his own. Only one woman will do—a fiery redhead he saved from the spoils of war.
No longer forced to warm the beds of the men who’ve taken everything from her, Æsa has nothing to offer the noble warrior but her heart.
When someone with a deep score to settle seeks revenge upon her, Gustaf’s world is torn asunder. He has but one vow—saving the woman he loves from the ignorant fool who dared to best the temperate warrior.

Gustaf’s hearty laughter echoed around her. It was a rarity she had come to cherish. With their troubles far behind them, she could only hope it would be a common occurrence, especially after they became husband and wife. She longed to be the source of his joy for the rest of his days and imagined giving him the sons he’s always wanted.

Their conversation on Skúvoy circled back into her thoughts. “I want to fill our house with many sons.”

“Aye, and daughters. I can only hope they resemble your beauty and speak with fire on their tongues.”

“I shall love them anyway for they will come from your womb.”

She envisioned him cradling a babe in his arms and teaching the youngster all there was to know about the new world he’d been born into. That was, if she could provide him a child at all.

Given that no man’s seed from her sordid past had taken root, she worried her womb was barren, incapable of even producing Gustaf’s heir.

“What are you thinking?”

His voice broke apart her sullen thoughts and she struggled to fabricate a credible answer to his question. “I was thinking of us and you as a father.” A half truth was better than a blatant lie, and she’d only disappoint him with mentioning such nonsense, especially since they’d yet to give conception a fair try. “I am eager to be your wife and the mother of your children.”

Gustaf tipped his head in surprise. “From where did that thought come?”

Another bout of spirited shouts erupted, followed by a considerable splash as if some poor bloke had hit the water. “I suspect it came from the devious seven we already have in our company. It would bring me great pleasure to birth that many or more with you.”

“Seven children, you say?” Gustaf nodded as he considered the thought. “You do realize I am a man of mature age. ’Twould require a considerable amount of lovemaking to acquire that number of offspring.”

“I am willing if you are,” Æsa stated, leaning up on one elbow.

Gustaf scooted closer and inclined his body across her torso, bracing his weight on one arm at her side. His dark blond hair fell over his shoulder and hugged the sharp angle of his jaw shadowed with soft scruff. She dared to reach up and stroke the soft curls of his thick mane, but the serious look in his eyes had her hesitating.

“I am most willing,” he said softly, “as long as it makes you happy. For the rest of my life, I will do whatever it takes to ensure it. As my wife, you will not want for anything. What you desire, I will provide.”

He bent to kiss her, but stopped midway. “Would I disappoint you if I said I wished to wait until we returned to Inis Mór to marry?”

The warmth of his breath across her lips caressed her starved skin. The blue of his eyes sparkled like the depths of the crystal sea. He was a beautiful man and it still seemed hard to fathom that he was all hers. She could barely contain her emotions as she lay motionless in their near kiss. “You could never disappoint me, Gustaf. Knowing you are eager to share our union with your family is more than I could hope. I have been without a family for so long and to be united with yours is an honor I cannot put into words.”

His smile stroked her all the way to her soul and the anticipation of his mouth meeting hers consumed her whole being. Nothing mattered except this moment, this kiss that made her keenly aware of her heart beating in her chest. Her entire body tingled as his lips finally made contact and her will to tolerate much more of this deliberate torture disintegrated in an upwelling of exhilaration.

She arched into him, craving the feel of his hard body against hers. It had felt like forever since he’d touched her intimately, despite that it had been only a few days. She hated going a single moment without his touch and drew toward him like a delicate flower in desperate need of warm sunlight.

He forced his body over hers and cupped the underside of her breast as he ground his erection into her sex, now swollen and aching with need. There was so much passion in this one little kiss that it seemed to surpass all others in comparison.

She shifted beneath him and opened her legs, eager for him to pull up her tunic and bury his rock hard shaft inside her. As she felt his arousal more prevalent against her flesh, she was reminded of the previous promise he’d made to her: This will not be last time you feel my arousal at dawn. One morning when we are without eyes, I will have you.

She hoped this very morning was the instance he’d relinquish his vow. Wrapping her legs around his back, she encouraged him, giving him permission to take her in the fashion she knew he longed for. “Throw your temperance aside, m’lord. Please.”

“I cannot,” he finally spat, breathing heavily. His jaw clenched and his eyes closed. The pain he endured of restraining himself cut across his face. “We are not alone. My men.”

His clipped words resounded in her head. “I was hoping you forgot about them.”

Gustaf sighed and let his forehead rest on hers. “All of me wishes I had.” He nudged himself against the open area of her thighs. “All of me.”

In one swift shove, he propelled his heavy body off hers and faced the fire, his breathing weighty and intense. Reaching between his legs, he shifted his burdensome erection and groaned. His chin fell to his chest and a long sigh heaved from his lungs. “Odin’s blood, you are but wicked temptation for the weak.”

Æsa sat up, feeling the strain of her sore muscles in the process. She ignored the sting of her aching back and touched his cheek, stroking his hair away from his tormented face. “Wicked enough to be punished?”

Gustaf stared at her, his eyes boring into hers. “Punished?”

She drew her finger over the hard angle of his jaw, down his neck and back up into the thick of his hair. “Call it what you will, but there is a fine line between punishment and pleasure. I have known great pleasure under the tenderness of your touch, but I long for more. I yearn to feel the wrath of the unchained warrior. To know what the abandonment of your restraint feels like between my thighs.”

She saw the column of his throat bob as he swallowed. Her words had struck him as hard as any blow to the gut, but she knew they likely caressed him like a warm tongue up his throbbing length.

“Perhaps having to abstain from your urges will force the wild animal from its barred enclosure when the time comes.”

“Perhaps,” he repeated, his voice cracking under duress.

She smiled and threaded her hands through his hair, wrenching his face closer to hers. “I can only hope.” With lust still blazing in his eyes, she took his lips and plundered his mouth with her tongue. As fiercely as she began the kiss, she broke away, capturing his wanton stare. “Sooner, rather than later.”

I am an author with a passionate interest in Irish and Norse history. I live in the rolling hills of Kentucky with my husband and two children on a beautiful secluded 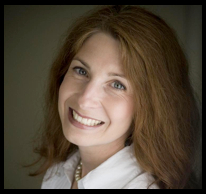 farm of horses and hay fields.

I am a sucker for a good cup of coffee (lots of cream and sugar…and whipped cream if I can get my hands on it), great conversation, and a lilting Irish accent. I love to read and I can’t resist watching great epic historical movies.

From an early age, I’ve always had scenes playing out in my head. Whether it was a story with a moral or a tale with a twist, those ideas have never let me sleep until I wrote them out. And considering I have an eclectic ensemble of stories swarming in my brain at any given time, I write under a couple pen names to accommodate the various genre categories.

Renee Vincent
(Historical & Contemporary Adult Romance)
From the daunting, charismatic Vikings, to the charming, brazen Alpha male heroes of modern day, you’ll be whisked away to a world filled with fast-paced adventure, unforgettable romance, and undying love.
Visit my website at http://www.reneevincent.com/

Gracie Lee Rose
(Lighthearted, Fancy-free Women’s Fiction)
For those who love to read fun, wholesome, and endearing romantic stories that your mother, sister, friends, and daughters can enjoy.