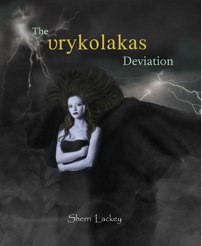 I’m happy to welcome Sherri Lackey today and her book, The Vrykolakas Deviation.

She will be awarding a $25 GC from Amazon to a randomly drawn commenter during the tour.

First Sherri is going to share her playlist for the book, and then we will get to check out an excerpt.

Take it away, Sherri!

Like many writers I know, listening to music as we write is inspirational and often helps set the tone of the story. My taste in music is eclectic, and I’m not limited to preferring any one particular genre of music over another. The tone of my novel is dark and lonely. In choosing a collection of songs that would fit that tone, I chose the following sample of five songs that would work as a playlist for The Vrykolakas Deviation. I hope to give you a sense of what The Vrykolakas Deviation is all about as I discuss these songs below.

Before I do that, I want to explain what a vrykolakas is exactly. A vrykolakas is a type of vampire of ancient Greek origin and they do not typically imbibe blood as do traditional vampires. In my story, vrykolakes drain the life from their victims with a touch from their hand. It’s an electrical transference of sorts. There are two deviant vrykolakes in my tale – Keeva, my main character, and her father, Sandor. They are labeled deviants because, instead of having the ability to drain human victims, they only have the ability to drain the life from other vrykolakes. Now that you know what my vrykolakes are, let’s look at the playlist.

The first song is Flight Response by Days of the New. As the song title implies, Keeva and her father, Sandor, live their lives on the run from other vrykolakes who view them as a threat. In fact, Sandor, for thousands upon thousands of years, has managed to hide his daughter’s existence from the vrykolakes altogether. That all changes when Keeva stumbles upon her friend being drained by an ancient vrykolakas named Severin, who also happens to be her father’s bitter enemy.

Keeva’s first impulse is to kill Severin. She ends up imprisoning him instead. Eventually, she releases him back into the world at large and immediately regrets her decision. When Sandor finds out what she has done, she must take flight lest Severin tell the other vrykolakes her whereabouts.

In the song If I Didn’t Know Any Better, Alison Krauss croons the words, “I turned around. Before I could run, I found you already settled down in the back of my mind. I know this is just a customary fever. The moon is a deceiver that will leave you running blind.” That line fits the scene so well in the book when Keeva first views Severin’s face, that it could easily have been her thoughts at that moment. She can’t understand her attraction to Severin, and running blind is what she finds herself doing next.

Bring Me to Life by Evanescence, on the other hand, could be the exact thoughts of Severin after Keeva sets him free. His time spent with Keeva has left him confused and disoriented. He doesn’t fully understand the change she has wrought inside of him. For over three thousand years he has lived a life a self-love, for vrykolakes only love themselves and no one else. Upon meeting Keeva, his solitary world begins to open up and he considers letting someone else in. He doesn’t understand that by doing so, it might cost him his life.

As Severin awakens to the possibilities of having a real relationship with someone, it takes him a while to adjust his behavior into something even resembling thoughtful and kind. He is used to simply taking whatever he has wanted in the past. That is why the song Shiver by Coldplay comes to mind when I think of Severin. One lyric in the song says, “And on and on from the moment I wake, to the moment I sleep, I’ll be there by your side, just you try and stop me.” That is Severin; he has no concept of personal boundaries.

Finally, there is the song The Sun Will Rise, a haunting tune sung by Brendan James. I think of this song as Sandor’s song. It’s melancholic but hopeful, which pretty much describes Sandor, who is an integral part of the story. In fact, when I was first writing The Vrykolakas Deviation, Sandor almost became the main character of the story. Despite everything that has happened to him in his three thousand plus years of life, for he has experienced several tragedies, he has an unfailing, hopeful outlook on life. This puts him in sharp contrast to his daughter, and if he were ever given to despair, Keeva could be just the one to push him over that cliff.

That wraps up the five top songs that could be considered as a playlist while reading The Vrykolakas Deviation. One more side note: Music is an essential daily requirement for me as a writer, and so it is not surprising that Severin, though he is a self-centered vrykolakas, is nonetheless an accomplished musician who can play any number of instruments. His personal preference is the cello. I hope you enjoy reading The Vrykolakas Deviation.

My hearty thanks to Carly Fall for letting me guest post on her blog today!

My pleasure Sherri, and now on to the book!

Keeva lives her life on the run, changing identities and personas. She is running from monsters she has never seen – vrykolakes, vampire creatures her father, Sandor, has told her stories about all her life. She had almost convinced herself

that these monsters had all died in a volcano eruption on the island of Strongili long ago.

But when a vrykolakas named Severin kills Mandy, her best friend, she discovers the vrykolakes are alive and well. Keeva knows about Severin from her father’s stories, and her first impulse is to kill him and rid the world of the evil vrykolakas. She feels drawn to him however, and takes him prisoner. She hopes to better understand the vrykolakes and perhaps better understand herself. She is over two thousand years old. She doesn’t know who or what she is, but she wants to find out. In order to do that, she has to discover her past. Severin might be the place to start looking for a connection to the past. Or, he could be the worst mistake Keeva has ever made.

“Do you need some help?”

“That’s nice of you to offer. Thank you.”

“What are we doing here, where are we going with this?” He nudged my package with his foot.

“I need it brought into my apartment. If you could maybe grab that end and I’ll get this one.”

It was much easier lifting Severin with two people. I momentarily wished I’d brought Darrin with me when I’d returned to the reservoir that night, but of course I had originally planned to kill Severin and not bring him back home with me. I couldn’t have known I would have benefitted from having an extra pair of hands.

Once inside my apartment, Darrin asked, “Where to now?”

“My guestroom just back there.” I indicated the direction with a nod of my head.

The cord I’d tied the blanket with had come loose and the vrykolakas was lying there in full view on the bed. Darrin and I both stood there looking at him for a few silent moments. It was a trifle bit awkward.

Finally, Darrin said, “Those knots you tied on his wrists should hold him pretty good. You did a good job there.” He nodded approvingly.

“Thanks.” I wondered how much experience Darrin had in tying knots.

“No, that should about do it. Thanks, Darrin, you’ve been a great help.”

Sherri Lackey, born in Carlsbad, New Mexico, now lives in Montana where the cold northern climate inspires her to write. She writes science fiction and fantasy with 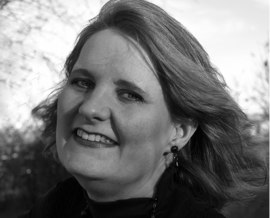 dashes of speculative fiction, a pinch of steampunk, and a touch of urban fantasy. She lives with her husband, Paul, and their three children. She also has a faithful dog named Raymond who likes to sit by her side while she writes.

Remember, the more you comment, the better chance you have of winning the Gift Certificate, so please follow the rest of the tour HERE