Shackled to the Night – Excerpt 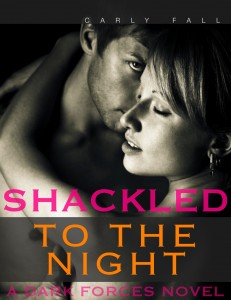 At the south end of Virginia Street in Reno, Nevada, Thaddeus sat in a booth in Atlanta Casino’s nightclub. The club and casino were packed with people who had come to enjoy the large snowfall the last storm had dropped when it rolled into town two days ago. The people at the Atlanta were those who could not get a room up on the mountain by the ski resorts, or those who simply could not afford one. No matter though, from the looks of things, no one really cared.

The club was dark, except for the strobe and laser lights that pulsed around the room. These brief flashes of light gave a flicker of the activity in the club. People writhed against each other on the dance floor, as well as in the booths and up against the walls to the techno-beats blaring over the speakers. The place was filled with people wanting to have sex, actually having sex as discreetly as possible, and those who had already done the dirty deed for the night but were always interested in going another round. Drugs were subtly consumed on tabletops, and paraphernalia was put away hurriedly as the security made their rounds and pretended not to see what was going on around them.

Thaddeus ran his finger up and down the neck of the woman sitting next to him. She was a cute little snow bunny that had latched herself to him, and he wasn’t complaining one bit. He watched the artery below her skin pulse almost to the exact beat of the music in the club.

Just a little while longer, he thought.

He glanced across the table at his friend Mark, a human, and fellow barfly. And just as Thaddeus was thinking about devouring his companion, what was her name again? Didn’t matter. Mark looked as though he was ready to consume the woman with him, the snow bunny’s friend. But obviously not in the same way.

The woman sitting next to Mark had long brownish hair, and she wasn’t ugly, nor was she really pretty. She had a great smile and a rack to match Pamela Anderson. Mark rarely cared about much more. If the rack was in place, he was good to go, a breast man through and through. Thaddeus noted her left hand had been absent for some time under the table, and the way Mark was shifting in the chair gave Thaddeus all the information he needed on where her hand was and what it was up to. He watched as Mark whispered something in her ear. She smiled coyly and nodded her head, turning to plant those ruby red lips on Mark’s throat. It was terribly apparent to Thaddeus that Mark would be enjoying the woman very soon. Go Mark.

Mark looked over and caught Thaddeus’s eye and nodded slightly. The sign that Mark was getting ready to make his exit with the woman. Thaddeus wondered if Mark would be getting a hotel room or taking the woman back to his house. Except for Mark, Thaddeus didn’t want humans anywhere near his house, so he always opted for the hotel room.

Thaddeus gave Mark a small smile, indicating that he got the message. Thaddeus wanted to be with the human woman who had just about wrapped herself around him with an ache. He inched closer to the woman who was gently rubbing his thigh. He breathed deeply. Lovely, he thought. She smelled absolutely lovely.

Mark took his date’s hand and began to slide out of the booth, clutching his jacket in front of his hips as he stood. He said something to Thaddeus and his company, but the music was too loud for the woman to hear it. Thaddeus heard it perfectly, though. Mark had said that he was going to grab a hotel room. Thaddeus nodded and turned his attention back to the lovely-smelling female sitting next to him. What was her name? Brenda, that was right.

Brenda was a vision to behold. Her long reddish brown hair hung to the middle of her back and fanned around her shoulders. Her tight red turtleneck left nothing to the imagination, her long legs were shrouded in a pair of jeans that may or may not have been painted on her curves, and she teetered her fine form on a pair of very red, sky-high fuck-me boots. Thaddeus imagined her spread out before him on a bed with nothing on but those boots.

His already-hard cock got harder, and he shifted in his chair trying to make room in his jeans before the damn thing busted through the zipper.

“So, Thaddeus,” Brenda said, running her fingers around the lip of her wine glass and staring at him with deep brown eyes. “Tell me what you like to do for fun.”

He smiled at her pink mouth, imagining those luscious lips around his… “I enjoy giving pleasure to beautiful women,” he growled in her ear. “And I think you are very beautiful.”

She smiled as she took a drink of her wine, snuggled closer to him and whispered in his ear, “I’m a little chilly. I hope you don’t mind.”

He grinned down at her, his fangs pulsing in his gums. He needed to get her out of here, and fast, or he would take her down right there and then.

He let Brenda finish her wine, and then he took her hand and moved out of the booth. She stumbled a little getting up, and giggled. Between the wine and those heels, her balance was a little off.

Leaving the club and going into the casino was a crash course in noise depravation. Despite the ringing of all the bells and whistles of the slot machines, the occasional holler of someone who just hit “the big one,” and the low hum of voices, it didn’t compare to the loud clamor of the casino’s club.

“I don’t know why they keep that music so loud in there,” she said as they walked through the casino toward the front desk. She stumbled again, giggled again, and grabbed his arm.

“I think I’m a little tipsy,” she said, looking up at him.

Thaddeus didn’t say anything, just looked down at her and smiled tightly as he placed his hand on her waist to help steady her. Irritation began to well up in him. He wanted to get to a room, like an hour ago. Her little stumbles were holding things up, and patience was not one of his strong characteristics, never had been. He had tried to work on it some years ago, but it had been an exercise in futility.

As they walked down the hallway that would lead them to the front desk, Thaddeus’s patience ran out, and he stopped and pushed her up against the wall, covering his towering body over hers. He pressed his lips gently to hers.

She reached up and grabbed his neck, pulling him closer, her tongue shooting out of her mouth, tracing his lips. Her response sent an electric current through his body, and it landed on the tip of his erection as he gyrated against her belly.

He felt a moan leave his throat and he explored her body through her clothes. Visions of him ripping off her clothes and throwing her down on the carpet in the hallway swam in front of him.

“Should I go and see if we can get somewhere a little more private?”

They hurried to the lobby, and Thaddeus went to the front desk while she hung back.

He quickly secured them a penthouse suite. Although he wouldn’t be staying long, Brenda would spend the night there, and he wanted it to be a nice place. He also ordered breakfast and a dozen roses to be delivered in the morning. Not only was she going to have sex with him, but she would also unknowingly be feeding him as well, and he believed a good meal was something to be cherished and respected. He wasn’t a total bastard, or at least that was what he told himself. Sure, he needed to feed, and hell, sex was fun, but being with Brenda would scratch a very uncomfortable itch inside him tonight, one that he would prefer not to think of very often…well, never, because it made him feel weak. If one thing had been beaten in him as a boy it was that weakness would never be tolerated. He shook his head to get away from the thoughts and concentrated on Brenda.

The elevator ride up to the penthouse was sheer torture. They were in frenzy by the time they arrived at the penthouse door, each unbuckling the other’s belts through passionate kisses and groping hands. They practically fell into the room. Out of habit, Thaddeus looked around to be sure they were alone, and noted that the penthouse was indeed very nice with its modern style furniture and sleek marble flooring. The floor-to-ceiling windows showed off a beautiful view of Reno, but he was far more interested in the view of Brenda.

Thaddeus quickly pulled the red turtleneck up over her head and dropped it on the floor. He picked her up effortlessly, and made his way to what he assumed would be the master bedroom.

“You, my dear,” he said as he took in her breasts covered in a very lacy red bra, “are lovely. Let us keep those boots on for a while though, okay?”