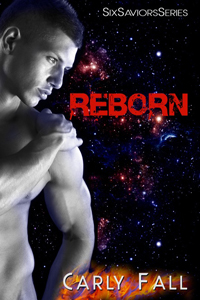 For buy links, scroll down…

Warrior Hudson from the Six Saviors seems to have it all – good looks, fine clothing, expensive jewelry and women just waiting for their turn to sleep with him.  But, what he safely keeps hidden from the world is the terrible pain he’s suffered for many years. As he fights his internal demons, he joins his fellow Warriors in waging war on the evil from their planet that has been let loose on Earth.

Beverly Devlone was a highly respected doctor, until tragedy hit her and a drug addiction destroyed her career and reputation. As a lonely woman fresh out of rehab, she’s now uncertain of her place in the world, what her purpose is, and where she belongs.

When an explosive event brings Hudson and Beverly together, the instant attraction between them cannot be ignored.  As the two grow closer and share secrets, they help each other heal from the shackles of their pasts.

But true happiness eludes them when they are forced to go their separate ways, until Beverly returns with an admission that will rock the very fabric of Hudson’s world.

4 STARS: The Reading Cafe:  REBORN is another wonderful storyline in Carly Fall’s Six Savior series. Hudson is a man lost in a world of self-doubt and pain, and it will take the love of a beautiful woman with some demons of her own, to bring him back to life. Hudson’s denial of the possibility of ever loving again, bleeds a self-fulfilling prophecy, when he doesn’t allow himself the freedom to find happiness. For full review: http://tinyurl.com/cgnc76d

5 STARS: The Romance Writer’s Reads: I love a story about two broken people somehow finding their way together. Neither were perfect people, yet both were able to find in each other everything that they’d been missing. Each were tested as well, and both passed with flying colors, which showed true character development. For full review: http://tinyurl.com/ckpwjkp

5 STARS: A reader: I absolutely love Carly Fall’s Six Savior Series. Her newest one, Reborn, does not dissapoint. Hudson finds himself in his own piece of hell, ready to give up on it all. Beverly is trying to find her way through. After events throw them together, they both help each other through their darkness and into a new and brighter beginning.

5 Couples: Confessions of a Romaholic: I love seeing the theme of pain and healing handled competently by author Carly Fall. She doesn’t make it feel that the characters are at fault for their decisions and behaviours. I‘m enjoying this series a lot and can’t wait to see where the next book will take us. 5 couples. For full review: http://tinyurl.com/cne44jy

More reviews can be seen on Amazon

He gingerly lifted his torso off the bed to a sitting position and threw his legs over the side, letting out a few ripe curses and began to breathe heavily. Concentrating on staying horizontal, he didn’t hear Bev come into the room.

“Hudson!” she said, rushing over to him. He looked up as she made her way from the bathroom to him, and he forgot about his pain for a moment. He actually forgot about everything, because he was simply struck stupid by what he was seeing.

Bev had wrapped her hair in a black towel, and his black silk robe was wrapped around her body. The damn thing swirled around her, far too big, but revealing enough to show the outline of taunt breasts and a small waist without much in the hips department. With every confident step she took, he thought he was going to get a glimpse of a thigh, but it never emerged. The black made her unmarked porcelain skin stand out. Her cheeks were pink from the heat of the shower. If he had thought she was pretty before…well, now she simply took his breath away.

“Are you okay? Are you going to be sick again?”

She sat down next to him and put her hand on his back. It was cool on his skin, but it might as well have been a hot branding iron.

Just like at the bar, her piercing green stare saw through the charade he had carefully constructed, and she knew the lies he had told.

He studied her face. Goddammit, she was what they described as a classic beauty. Smooth porcelain skin. High cheekbones. Full lips. There wasn’t a flaw anywhere on her face that he could see. She sat with her back ramrod straight, her shoulders pushed back, her chin lifted. He was reminded of pictures of royalty, except they all tended to look like they had a broomstick stuck up their asses and attached to their spines. For Beverly, the way she carried herself was natural.

Women like her had never held an interest for him. He always went for the ones with a bit of a hard edge. The party girls. Hell, he’d been with hookers many, many times. He had always felt that women like Beverly deserved more than he could offer. The others were simply looking for a body or to get paid. Of course, he would love nothing more than to have such a woman, but all he could give her would be a night of nothing but fucking, maybe some cuffs or a blindfold to fulfill an erotic fantasy. He didn’t have much else. Perhaps an omelet in the morning, but there wasn’t much more to the what-can-Hudson-give-a-woman list.

However, as Beverly stared him down, he felt the electric sexual attraction between them, a force onto itself. She wanted him, and he knew he wanted her as he speculated about what was going on in his boxers, which was pretty messed up considering he could barely move.

He thought about his bloody, swollen lip and how much he wanted to kiss her. Maybe, just maybe after Cohen got back, he would…

No, he didn’t want this.

But maybe he did.

But then her hand came up and gently touched the side of his face, her fingers tracing through his hair.

This was some kind of fucked-up spell. He actually wondered if she was a witch. Why couldn’t he look away? Why couldn’t he disengage from this…thing passing between them?

A loud knock on the door had her flying off the bed to the middle of the room, and he felt himself exhale. He took a deep breath and rubbed his hand over his face.

REBORN is available at all major ebook outlets.  If you can’t find it at your favorite shopping site, please let me know.