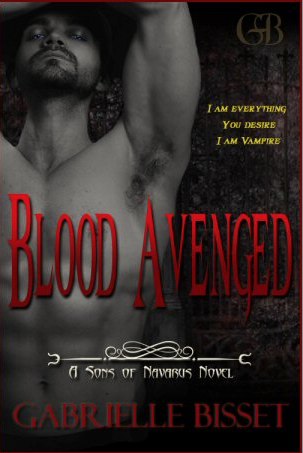 I’m happy to have Gabrielle Bisset here today and feature her book, Blood Avenged.  She will be giving away a $5 Amazon GC and swag pack from Sons of Navarus series (bookmarks, cover flats, trading cards). Contest is tour-wide, open internationally and ends Jan 22. Must be 18 years of age or older to enter. You can enter at the bottom of the post. 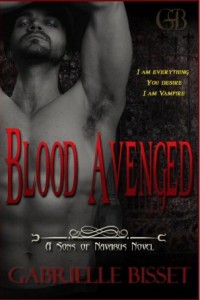 I am everything you desire. I am vampire.

Powerful and manipulative, Vasilije does as he pleases. A vampire beholden to no one, he takes what he desires, drinking deeply the pleasures this life has to offer.

When one of his own is staked, Vasilije must travel to New Orleans to exact his revenge. There he meets Sasa, a beautiful woman who arouses him like no other has for centuries. Vasilije’s need for vengeance is equaled only by his passion for her, but what he finds in his revenge is just the beginning…

“Dark, mysterious and sometimes violent, this sexy tale uses New Orleans and a taste of voodoo as a backdrop. It will capture your imagination from the first paragraph.” 4 stars (RT Magazine)

“Bisset is rapidly climbing up in the world of PNR and is a definite must-watch-for writer! I can’t wait for the next book in her new Sons of Navarus series!” 4.5 stars (A Night Owl Reviews Top Pick)

At the street, he stopped and inhaled deeply, hoping to sense something that would help him find Teagan’s killer. Nothing came. But there’d been something in the apartment…something that he was sure he recognized.

Eyes closed, he let his other senses take over, but he got nothing. “What did he look like?”

Vasilije snapped his head to the left to look at her. “Man or woman?”

Instantly, Tatiana’s threat repeated in his head. Now I take something you cherish. Had she staked one of his vampires in retaliation over Alex? Vasilije doubted even Tatiana would stake a vampire herself, but she wasn’t above having someone else do it.

That didn’t mean Tatiana wasn’t behind Teagan’s murder. And who was this woman who claimed to be Teagan’s girlfriend?

“Did you see which direction he ran?”

Sasa shook her head sadly. “No, I’m sorry. Are you his sire?”

“How do you know about that?” he asked, more suspicious than he’d been just a minute earlier.

“Teagan was a vampire, and you just look like a sire would. That’s what you call them, right?”

“Yeah, I’m his sire and right now I need to find the fuck who killed one of my vampires,” he said looking down the street.

Turning to look at her, he raised one eyebrow. “You’re a curious one, aren’t you, pet?”

“Well, I think I should know your name if we’re going to work together to find Teagan’s killer.”

Vasilije continued to work on getting any sense of who he was looking for, but nothing came to him. Frustrated, he’d need time to think and find his way around this new place before he could search for the killer, and the last thing he needed was a weepy woman tagging along.

“Uh, no. We’re not going to be working together to find anything. Just point me to the nearest place I can get something to eat and I’ll be on my way.”

In a second, her hands were back on his arm and squeezing. “Please let me help. I want to see the person who did this brought to justice.”

Justice? Vasilije smiled at the idea of justice, sure she would be appalled by what he intended to do to Teagan’s killer. Humans were always more squeamish than he thought they should be, considering their own history.

“How long were you and Teagan together?”

Vasilije noticed her defensiveness immediately. Her body language screamed she was hiding something.

Sasa shifted her weight between her feet. “I was. I mean, we were. Attached. And even though we had problems, we were trying to work things out.”

A sheepish look came over her face. “I forgave him and we’d have worked things out…”

Sasa’s lip quivered for just a second, and Vasilije was afraid she’d begin crying again. Teagan hadn’t changed in his new home, it seemed. A notorious ladies’ man, his wandering eye had been the reason he’d moved four thousand miles away from the only place he’d ever called home. Obviously, that relationship hadn’t survived since Sasa stood next to him all dewy eyed over his death.

“It’s not like that. It doesn’t matter what you think anyway. I just owe it to him to find out who did this.”

Vasilije smiled at Sasa’s words. She was probably completely unaware that the one she’d caught her boyfriend with was likely one of many. Such blind devotion.

“Love, I don’t think you understand what’s going to happen when I find the guy who did this. My idea of justice and yours aren’t the same, I guarantee you.”

Gabrielle Bisset’s first book was released in June 2011, and since then readers have fallen in love with her paranormal stories with just the right amount of history thrown in. From her own creations, the Aeveren, to her vampires of the Sons of Navarus series, Gabrielle blends the genres of urban fantasy and paranormal romance in her own unique way. Her stories are sexy and smart, transporting the reader to another world.

When she’s not writing, she loves to relax with family and friends making great food and memories. Find out more about Gabrielle and her books at http://gbisset.blogspot.com/.

You can find more of the tour here: