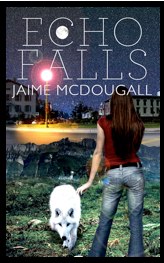 I’m happy to have Jaime McDougall here today to talk about her writing, and her book, Echo Falls.  First she’s talking a little bit about book genres, and then we’ll find out about her book.  Take it away, Jaime!

Even when I was a child, I would often be asked what genre I wrote in. The answer changed many times, from sci-fi to contemporary to fan fiction (yes, that counts), to fantasy. I read nearly any genre and wrote in nearly any genre.

It didn’t take me long to realise that my affection for bouncing around genres would follow me into my adulthood. Why would I have to settle? But at twelve years old, I felt a little nervous about it all so I did some digging into authors who wrote in different genres.

Lo and behold, pen names! Pen names solve it all. Or so I tried to get myself to think.

I continued to bounce around genres, mainly staying in fantasy but occasionally branching out into other things. Little doubts played in the back of my mind, wondering if I wasn’t making some huge mistake by not giving up multiple genres in favour of one.

By the time I had turned eighteen, I had a couple novels, a few novellas, plenty of short stories and even a play to my name. Having graduated from high school and ready to start my first year of university, I had to step back and really look at this ‘writing thing’ I’d always done and whether I wanted to pursue it for life.

‘Life’ was a big thing, like ‘adulthood’ and ‘car insurance’, and I was intimidated. But I also knew that through every good, bad and ugly moment of my life, writing had always been a part of me.

I couldn’t imagine giving it up.

People urged me to find my genre and stick to it, the mentality that you need to be really good at one thing instead of good at a lot of things prevailing. I didn’t listen. I had stories to tell; the characters decided whether they were from New York or a new planet.

But I did finally have enough writing so I could look and see that my writing did have a common thread, a common subgenre, if you will: romance.

All the times I’d wondered if something was wrong with me that I couldn’t at least settle down into one or two genres, and there was a subgenre floating through it all – even the play!

I realized that it’s love – the ups, downs and craziness of it – that drives my writing. Sure, I write about people in different times and different places, but somewhere there, someone will fall in love. And it’s no wonder. Love has always been important to me, both in the friend and the romantic sense. That it slips into my writing with every single piece (except for some of the non-fiction) is simply part of being a writer.

So if anyone ever needles you to find your genre or stick to one genre, ignore them. Find the subject that drives you, be it love, faith, the meaning of life, or life itself. Then you will have the winning component.

And you’ll finally be able to name your muse.

Running from a nightmare stalking her every move, Phoebe Martin arrives in Echo Falls hoping she has finally found a safe place to stop. But trouble has a way of catching up and soon the signs are there.

After a vicious attack in an alley, policeman Aidan O’Bryan is left with Phoebe as his only path to understanding why the Echo Falls werewolf pack – his pack – is being attacked. When another pack member is killed, Phoebe is forced to confront her past before she loses Aidan and everything she has come to love.

Love and duty become one as Aidan strives to prevent Phoebe from becoming the next victim. But with Phoebe just as determined to protect Aidan and her new home, secrets from her past threaten to tear them apart. Will love give Phoebe the strength to trust Aidan and face her fears, or will her past destroy her future?

How many steps can there be?

She should know. She lived in this apartment building.

Tears ran down her cheeks and her lungs burned for air. Only the random irrational thought broke through the panic keeping her feet moving down the steps. Keep running. Keep running. The light of the emergency exit came into view. Almost there…

The door to the stairwell slammed open with a hollow boom. She tripped and clung to the railing to steady herself.

The shock of the cool night air sent a shiver of relief through her body. She’d come out a side exit into an alley. If she could just get to the front –

Suddenly she was thrown to the ground from behind. She hit the concrete, what little breath she had knocked from her lungs. Blood began flowing from where her head hit the ground, and small sparks of light floated into her vision.

How did he catch up so fast?

Desperately she tried to gulp down as much air as she could, willing her lungs to cooperate. Instinct kicked in as the attacker slashed at her, and she curled into fetal position.

A dog. He’d turned into a dog. A big dog with vicious claws and teeth he used to tear into her exposed back, thigh and shoulder. She slowly regained her breath but could only use it to scream her throat raw.

Her vision faded, taking the small sparks of light with it. Searing pain ripped through her shoulder as a claw dug down against her bone. One last, long scream tore from her lungs before she was left gasping and sobbing, her fear slowly smoldering into rage.

She opened her eyes as the dog stood over her, trying to get to her throat. A paw came into her line of vision and she saw her chance. She reached out, grabbed it and squeezed with all the strength she had.

The dog yelped and tried to twist away, but she held on with all the strength she had. She knew she’d only bought herself time. She couldn’t move the dog off her and she couldn’t squeeze his paw all night. He tried uselessly to bite her, his jaws having no strength so long as she squeezed his paw. But she could already feel her strength waning.

Suddenly the weight of the dog flew off her, taking the paw out of her grip. Without thinking, she used her one cooperating arm to drag herself toward the front of the building.

She shivered, her arm giving out, and caught a glimpse of a second dog. No. A wolf… Squeezing her eyes tightly shut, she listened to the dogs fighting, the battle just a few steps away. She tried her best to curl up against the building wall and willed the growling and snapping to go away. They sounded like they were tearing each other to pieces.

The universe granted her wish, the battle ending with the sound of two bodies hitting each other and a sharp whine. She shivered and softly whined as well, dreading the approach of the winner as one of the dogs yelped and ran away.

A few moments later warm, human hand brushed the back of her head and she screamed again. If it could be called a scream. Her throat burned and rebelled at her abuse of it.

She tried to scream again and move away, but her body wouldn’t obey her commands. She groaned as the full force of the pain washed over her.

He murmured and she relaxed her desperate grip on staying conscious. Sleep seemed so tempting, the black abyss singing a siren’s song to her. Her rescuer – or captor – tried to soothe her, but something dark and dangerous in his voice betrayed him. He was different. She tried to bat away his hands but gave up after a few attempts, not sure if her good hand was actually moving.

As she slipped into the darkness, she wondered if death had merely granted her a short reprieve from the inevitable. 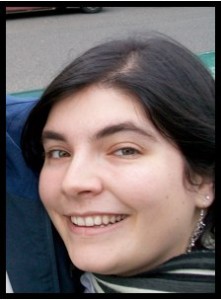 Jaime McDougall is a citizen of the world, currently loving life in beautiful country Victoria in Australia. She loves eating sushi, kidnapping her husband and naming her pets in honour of science fiction authors.

A love of fiction has always coursed through her veins and she told stories as a child even before she knew how to write them. Settling into one genre was never her style and she has plans for novels in women’s fiction, urban fantasy and more – all with a touch of romance.