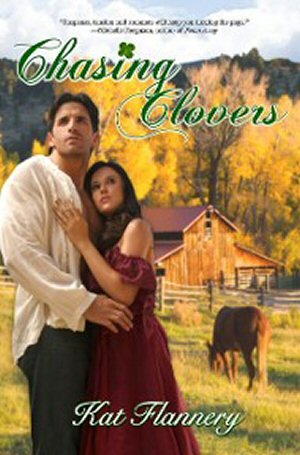 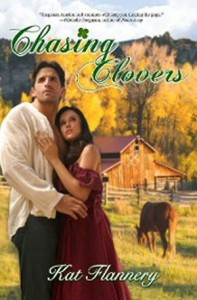 I’m not one for western romances, but I do have to say I enjoyed this book.  It is a well written, fast read.  What starts out as two people needing the other for different reasons, turns into a sweet romance.  The characters were strong, and yet deeply hurt by past circumstances in each of their lives.  The author also kept everything very real.  Livy and John don’t immediately fall head over heals for each other, but it takes time for them to really notice each other.  The kids don’t accept her right away either.

However, I did find it hard to read about Livy’s pain and how she treats John’s daughter at first.  I tried to put myself in her shoes with her circumstances to understand it, but I couldn’t because Livy’s past is one of my worst nightmares.

The  villain was also well done, making my skin crawl a time or two.  Definitely put it in your To Read pile!

Mail order bride, Livy Green, is desperate the memories of her past. John Taylor will never love another woman again, but his children need a mother. Will they learn to trust each other, or will their pasts interfere?

Longing to escape the awful memories and the saloon she once sang in, Livy Green lies about her past so she can be a wife to John Taylor and step mother to his two young children. Overwhelmed by the task, she struggles to put her resentment aside and love them as her own.

John loved his first wife and is still heartbroken over the loss, but he needs a mother for his children. When his distant and unfriendly mail order bride arrives, he begins to doubt his decision though one glance into Livy’s terrified green eyes tells him he can’t turn his back on her.

As Livy’s past catches up with her and suspicious accidents begin to happen on the ranch, she is tempted to come clean and tell John the truth. But will he send her back if he does? Or will they forever be CHASING CLOVERS?

The stagecoach pitched to a stop, jostling Livy Green from fitful nightmares of a past she longed to bury and the stranger she was about to marry. Her neck stiff and her back aching, she massaged her shoulders. She straightened and tried to stretch her arms, but the tiny space wouldn’t allow it.

A loud sigh blew from her lips when she realized how rumpled her clothes were. Frowning, she ran her hands along her skirt. Nothing but a hot iron would get the wrinkles out. With only two other dresses in her wardrobe, and no time to change anyway, she had no choice but to meet her fiancé looking as she did.

Her stomach dropped. What if I’m not what he’s expecting?

She peered out the window and wasn’t surprised to see a few North West Mounted Police mingling with the other townspeople. Their bright red uniforms stood out like apples on a tree. She reached for her satchel and held it tightly before she stepped out the small door. You can do this. She squeezed the handle on her luggage. You have to.

Fort Calgary was a bustling town with two hotels on either side of the street, a small dress shop with ladies hats and fabric displayed in the window, and a red-bricked bank on the northwest corner. She watched people walking along the wooden planks and filtering in and out of the shops.

A loud squeal sounded behind her.

Livy jumped. She was almost trampled by a young boy running from his mother. Her heart lurched at the sight of the child. The familiar ache inside her soul willed her to look away. But she continued to watch mother and child until they disappeared inside the mercantile.

She took a deep breath, forced all thoughts of the past out of her mind and scanned the streets again. Her face flushed when she thought of what she was about to do.

Bag in hand, she spotted the blacksmith across the street next to the barbershop. Her stomach twisted at the sight of the saloon two buildings down. The all too familiar swinging doors waved back and forth, taunting her. Two drunken cowboys left the saloon, weaving their way down the boardwalk.

Livy clenched the satchel and tensed.

She turned away, closed her eyes, and took another deep breath. Here she would be the wife to John Taylor―a man she’d never met―and stepmother to his two children.

She took another breath. She would start over. Again.

She surveyed the busy boardwalk in search of a tall man with dark hair. Almost every man she saw fit the description he had given her, so she decided to move over to the bench in front of the mercantile and wait for Mr. Taylor to find her. Hands folded together on her lap. She tapped her toe restlessly. Where could he be?

A rough looking cowboy sauntered toward her. His brown greasy hair, and ripped denims were paired with an evil smile.

Livy tucked her chin into her chest. Oh, please don’t let that be him. She’d seen his type before and knew what they were capable of. The man lingered beside her for a few moments before continuing on down the boardwalk.

She sighed with relief. How am I going to do this?

No longer Angel Green, she was now Olivia Green. The past was far behind her, except on those long dark nights that would not allow her to escape it.

She chewed on her bottom lip and stared at the busy street.

Her new life would begin here. She would survive.

She blew out a shaky breath. It was all she knew how to do.

A tall man stood beside her, his hat pulled low so she couldn’t see his eyes. He hesitated, then extended his hand. “Olivia?” He had a polite, resonating voice.

She shaded her eyes with a hand. “Livy will do fine.” She was uncomfortably aware of his presence as he towered over her.

He smiled and took off his hat. Wavy black hair curled above the collar of his coat and his skin was tanned from the sun. He looked nothing like the dirty cowboy. Thank goodness. Instead, he wore a clean flannel shirt tucked into faded denim pants.

“John Taylor. Good to finally meet you. My buckboard is over there.” He pointed the way, then peered around. “Where are your trunks?”

Her cheeks reddened as she lifted her tattered brown satchel. She held it slightly behind, not wanting him to see the holes and stains on it.

Nodding, he offered his arm. She ignored it. Friendly eyes stared back at her. After what had happened to her in Great Falls, she hated being touched by men.

“Do not be insulted, Mr. Taylor,” she said, staring at his boots, “but I’d rather you show me the way instead.”

She headed in the direction he’d pointed out earlier. When she heard a low chuckle from behind, she pursed her lips and walked faster. I need no one, least of all a man.

In truth, she needed John Taylor more than she could admit.

About The Author, and How To Connect With Her: 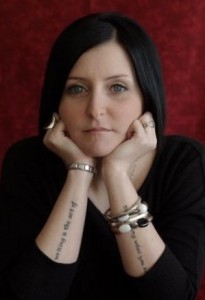 Kat Flannery has had her writing published in numerous periodicals. She’s received her diploma for Creative, Freelance, and Business Writing. She is co-owner of Prairie Dog Publishing, where she devotes her spare time as head of Marketing and Communications. When not focusing on her creative passions, Kat is busy with her three boys and doting husband. Chasing Clovers is Kat’s first published novel, and she is currently working on her next.
http://www.katflannery-author.com
http://www.kat-scratch.blogspot.com
http://www.facebook.com/pages/Kat-Flannery/131065966999142
http://twitter.com/#!/@katflannery1

To see more of Kat, including guest posts, and maybe even a giveaway or two, click the button below: 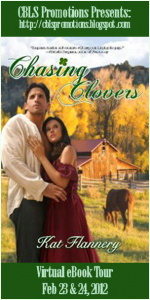