I’m very happy to have Ryshia Kennie here with her book, Fatal Intent. I asked Ryshia if she did research to get the setting/details/feeling of the jungle right, or has she been there?

She’s going to answer my question, and then we get a peek at the book.

My trip to Borneo inspired Fatal Intent rather than the other way around.  Now, I can’t imagine writing Fatal Intent without having been to Borneo for being there gave me a sense of the jungle.   I was surprised by the noise, how the insects sawed and screeched.  And sometimes, too – it was silent.  I remember how the grass whipped into the shape of an S as one of the many large lizards slipped through an area, and how the foliage was wet and thick, and the humidity felt slick against your skin.  Hot, damp and humid and there we were wearing long pants that were tucked into our socks on treks to keep out the leeches!  Yes there were a lot of bugs in Borneo and most of them were oversized.  Thank goodness, not the leeches.

Bugs aside, there was a lot of inspiration on that trip and really one moment when I knew Fatal Intent had to be written.  The moment when as I felt the jungle press in around me, I could visualize the discovery of the headless guide that begins the story.  It was on a day trip down river to see one of the local longhouses.

I remember standing at the foot of those rickety wooden stairs, the sun beating down and the jungle alive with a cacophony of sound and the roar of the river only a few feet away, and heading upward and trying not to think of how old that worn, steep staircase was or how frail the railing might be.  And when I reached the top there was the longhouse.  It looked rather like a retro motel, with woven reed mats drying rice in the sun and old women looking at us with a combination of curiosity and disdain.  And as we followed our guide he was quick to point out the human skull that dangled from the rafters in the common area.  A human skull – over a hundred years old and all that remained of their headhunting tradition, or so he said.  Maybe it was just  a good story for the tourists but it definitely was the catalyst of a story.

Having the opportunity to be on site for research gave the jungle a dimension I would never have attained from a book.  And, of course, when I came home I researched using books and online sites to get more details on tribal customs and current practices.  And even the books were addictive.  Borneo is an amazing place with a culture every bit as fascinating as the natural world that surrounds it.

In the heart of the jungle lies more than just the hint of death.

entomologist, Garrett Cole.  But when her guide turns up dead and headless, her abilities are tested.  As the dense foliage pushes her team further from the river, they are lost.  Every shimmer of sound is a threat, and when a blonde haired, half-naked giant emerges from nowhere, she wants to run.   But there are no

Raised in the lush cradle of the Borneo jungle, Aidan is as unconventional as the fact that he has no last name.  While the city is home, he returns to the jungle for peace and solitude.  As a PI, how can he ignore the mystery this group and their dead guide poses?  Leading them in a convoluted trek in a bid for answers he soon finds himself in a clash of wills with their alluring leader and answers that slide dangerously close to the tribe he loves.

In the jungle’s torrid heat they find unexpected solace in each others arms.  But faced with death and betrayal, in a battle of wits that puts lives on the edge, can anyone be trusted?

Aidan moved vines back, exposing his face. They only had to look in his direction.

He was so close he could have reached out and touched her. She was delicate, out of place here in the midst of this wilderness. Her skin, even beneath the sweat and exertion-stained flush, was fair. She wasn’t built to be here, she was too slight to survive, too weak, too . . .

She glanced up. A frown immediately seared her face.

“Who the hell are you?” she snarled.

He bit back a smile. She should have screamed. She hadn’t. All tiny limbs and fragile beauty, and yet she attacked first.

He let his gaze rove over the group, refusing to be corralled by her attack.

One of the men looked panicked, the others seriously stressed. He shifted his spear to his other hand and waited, taking the warrior advantage of time and observation. The silent often learned much about their enemy.

“Put that down.” She gestured to his spear.

His fingers loosened for a millisecond before gripping the spear tighter. Was she out of her mind? Green, innocent, and totally forest-illiterate, but she was feisty.

Feisty? She was seething, hot, absolutely pissed—about what, he wasn’t sure. Her anger didn’t make much sense. Nothing about this afternoon made much sense.

Ryshia Kennie is the author of two published romances.  From the Dust, is a romance set during the Great Depression.  Her second book, Ring of Desire, was set against a backdrop of magic and mystery, in medieval England.  An award 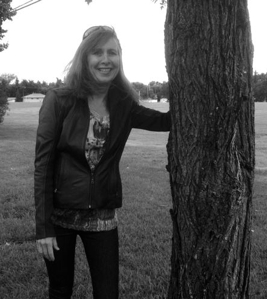 winning author, her recent novels now focus on  suspense and women’s fiction – always with a hint or even a dollop, of romance. The Canadian prairies are home where she lives with her husband and one opinionated Irish Terrier.

For other stops on the  tour, please go HERE