Guest interview with a Prince 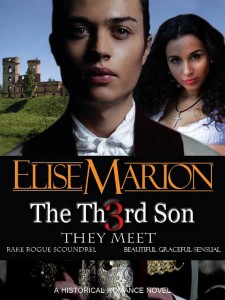 A couple of days ago I had the pleasure of sitting down with Damien from The Third Son by Elise Marion.  Needless to say, I was a bit nervous.  I mean, how often does one get to interview a prince?  Let alone a really, really good looking prince who is charming in a bad boy way?  It’s not an everyday ocurrence for me!
Damien and I met at his castle, which is a lovely place filled with all the best furnishings and doting servants.  Damien was terribly charming.  He gave me the special smile I have read about, offered me a brandy which I gladly accepted, and took me out to see his beautiful horse in the stables.  We finally sat down over lunch by a roaring fire in the fireplace.

Carly:  Damien, thank you so much for taking the time to meet with me.

Damien:  Of course.  It’s my pleasure.
Carly:  Damien, I’m currently reading your story, which I am really liking a lot, but I’m not all the way through it.  Can you give me a brief synopsis of your story?
Damien: My story is quite intricate and complicated, but I’ll try my best to be brief. My name is Damien Largess, and I am a prince, the third of three sons. Even though I am a prince, no one seems to expect much from me. They’re all too busy fawning over my brother Lionus, the crowned prince. One day he will be king, and if at all possible, become even more annoying than he is now. He accuses me of being a disgrace, a stain on an otherwise pristine aristocratic family. Because I am third in line, and very unlikely to take the throne, no one cares what I do. And so, I fill my days with the things that tickle my fancy: cards, women, and drink. I suppose you could call me a bit of a rake, although I do endeavor not to break too many hearts if I can help it.

My entire world was changed, however, when Esmeralda came into my life. Like something out of a dream, she appeared from out of nowhere and turned my world upside down. I loved her, more than any man could a woman I think. It wasn’t until after I was so madly in love with her, that all hell broke loose. Suffice it to say that someone is killing off members of my family one by one in an attempt to gain the throne. They will not rest until we are all dead, as they intend to claim the throne when we are. At this point, I am faced with the possibility of having to claim the throne and I must confess, I am less than thrilled at the idea. If I must take the throne, I risk losing the single brightest spot in my life.

Carly:  Wow.  It seems you have quite a road ahead of you.  I wish you the best of luck, whether you claim the throne or not.  Damien, what is your favorite part about being the son of a king?

Damien: My favorite part of being a prince is being the youngest. No responsibility, no pressure; I am free to do as I please. Not to mention the fact that I have an entire wing of the palace to myself, and never run out of fine brandy or cigars.

Carly:  What is your least favorite part?

My least favorite part of being a prince is the scrutiny that comes along with the position. While I have gotten used to living in the public eye, I often wonder what it would be to not have everyones eyes on me all of the time. I crave solitude, and revel in those moments alone when I can find them.

Carly: What was the most challenging thing about telling your story that you and your creator faced?

Damien: There were several challenges in the telling of our story. I wanted Elise to properly convey just how much I love my Esmeralda, just how far I was willing to go to make her mine. I believe she accomplished this. Though, for the record, we spent many a sleepless night arguing over just how the sensual scenes should be written. We wanted people to feel the connection as if they are really there.

Another challenge for Elise was keeping up an air of mystery and surprise. There are several moments that may take the reader by surprise. One of those moments is the revelation of the villian toward the end. It was difficult for her to leave little clues as to who it might be without making it to obvious. I think readers will be pleasantly surprised; the ones who had no idea will be shocked, the ones who suspected or had an inkling will be pleased.

Carly:  Is there any part of your story that you wish your creator had told? Are there parts of the story you wish hadn’t been told?

Damien: There is a part of the book where it seems as though all hope is lost for Esmeralda and me. Elise may leave the reader with the impression that we are doomed to loneliness and despair the rest of our lives. I do not regret the telling of this chapter in my life, but I do not remember the time with much fondness. It was quite possibly the darkest chapter in my existence. I wish that part of the story didn’t have to be told, but in the end, Elise and I both agreed that it needed to be there. It makes the ending so much sweeter. The conclusion is well worth any suffer the reader might face wondering if we’re ever going to be together.

Carly:  Will your creator feature you in another book? If so, when will that be out?

Damien: The story of Esmeralda and I continues on as Elise continues to tell the story of both my and Esmeralda’s families. You will see glimpses of us in our happily ever after as you continue on a journey that began with us falling in love. I almost feel as though our joining was the catalyst for the things that have followed.

The second installment ‘The Second Son’ is about another member of my family finding love. It will be released January 1, 2012. If you have read my story and enjoyed it, then I hope that you will read this one as well. It has all of the passion, intrigue, and danger that was present in my story. You won’t be disappointed!

Carly:  Do you have anything to add that you think the readers should know?

Damien: If I could leave readers with one thing, it would be simply that love conquers all. Look at me, a man once labeled a rogue and a libertine. I was once thought incapable of love; I even thought this of myself. It just serves as an example of how strange love can be. One moment you’re walking alone, and in a single instant, your world can collide with someone else’s. When that happens….well let’s just say that once you give yourself up to it, it’s the single most important thing that can ever happen in your life. At least, it was for me.

Carly:  Damien, thank you once again for meeting with me and your generous hospitality.  It was an honor to meet a prince.  Your story is beautiful, and I wish you and Esmeralda the best in your future together!
To get the The Third Son, please visit:
Kindle Edition – Free for a short period of time 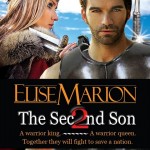 The Second Son is also available on Kindle